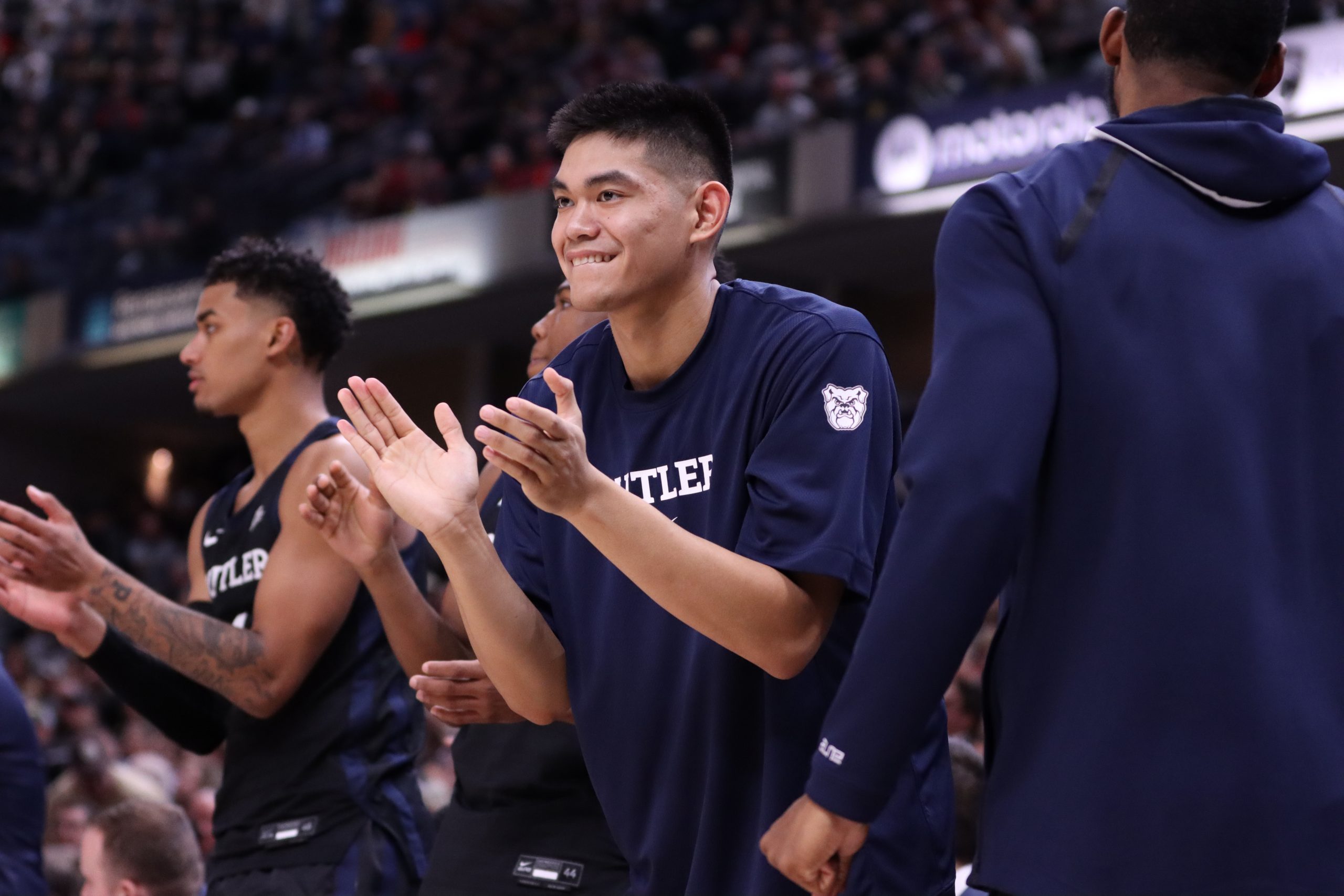 Christian David and Jordan Tucker clap on the bench during a game against Purdue on Dec. 21. Butler defeated the Boilermakers in the Crossroads Classic for the first time since 2015. Photo by Chandler Hart/Collegian file photo.

Every time the 2019-20 Butler men’s basketball team wins a game, I think a little harder about the following question: just how good is this team?

Before even getting to conference play, this team has gone from being picked eighth in the Big East coaches’ poll after finishing in the cellar last season to No. 11 in the country. Not to mention they are the two seed of every bracketology I’ve seen in the last week.

So, I’ll ask the question again: how good is this Butler team?

When thinking about this question, I like to reference past Butler teams. Even though it might be cliché at this point, there is a “Butler Way” that runs through every Butler team — and especially every good one. It’s not an unfair way of gauging just how good this year’s team is, at least, not in my opinion.

The most recent team to force this question to be answered was the 2016-17 team, or team 119. Just as an aside, Butler teams are often referenced by what year they are in Butler basketball history. So, that team was team 119, and the current team is team 122.

Just how similar are these two teams? Let’s find out.

Before we begin, please understand that this comparison is largely based on numbers and resumés rather than a head-to-head comparison of the personnel on each roster.

Team 119 finished the year 25-9, defeated Villanova twice and advanced to the Sweet 16 while finishing second in the Big East. Of course, team 122 is only 13 games into the season. So, for the sake of comparison, the stopping point is right before conference play begins. At this point, this year’s team is 12-1 and the 2016 team was 11-1 having played one less game.

For starters, both teams were drastically underestimated in the preseason. Neither team was ranked to begin the year, neither were particularly close to it, and both were picked to finish in the back half of the Big East. This year’s team was picked eighth and team 119 was picked to finish sixth.

On Dec. 30, the eighth AP poll of the year came out, and team 122 was No. 11 on that poll after beginning the year unranked. The eighth poll of the 2016-17 season, which came out on Dec. 26, 2016, slotted Butler as the 13th best team in the country. Not only were their records very similar after eight weeks, but how they wooed AP voters had a very similar structure. In other words, their resumés after eight weeks were almost mirror images of each other.

Going into conference play, both teams only had one loss. Team 122’s only loss came to Baylor, who is currently No. 6 in the country, while team 119 suffered an in-state road loss to Indiana State. Clearly, one is better than the other but neither team lost inside Hinkle or on a neutral court prior to conference play.

Both teams won a Thanksgiving week tournament and both teams beat two Power 5 conference teams on their way to trophies. The 2016-17 Bulldogs defeated Vanderbilt and Arizona — a top 10 team at the time — at the Continental Tire Las Vegas Invitational. In November 2019, Butler beat Missouri and Stanford on their way to a Hall of Fame Classic championship.

Thanksgiving week was the center of two very difficult nonconference slates. Between the two seasons, the two teams had 13 wins against Power 5 opponents — team 122 with seven, 119 with six — and both teams won at the Crossroads Classic.

There aren’t many places where these two teams differ, and where they do, team 122, from a metrics standpoint, is clearly the better team. As of Dec. 30, this year’s Butler is seventh at KenPom with a top 20 offense and defense in terms of efficiency, including the ninth-best defense in the country. At the end of the 2016-17 season, Butler was 25th at KenPom, and while they had an offense inside the top 20, that defense was just inside the top 50 nationally.

Ultimately, one win, two AP poll spots, and one win against Power 5 opponents separated these two teams in nonconference play.

It’s clear these two teams look very similar from a resumé standpoint. However, there is reason to suggest that this team could go further than team 119 did three years ago.

It starts with the rest of the country, literally. There are a lot of good teams in college basketball this season.

There are no great ones.

Six different No. 1 teams have lost before Jan. 1 and a couple of them were downright embarrassing — see Duke’s loss to Stephen F. Austin and Kentucky’s loss to Evansville. Unlike previous years, every team that has sat at the top of the rankings has an obvious flaw.

In 2016-17, the best teams in college basketball were elite, and two of them were in Butler’s region. The Big East had Villanova. While they loss to Butler twice, they had Jalen Brunson, Josh Hart and Eric Paschall leading their team. All three of those players play substantial roles on their current NBA teams, not to mention Mikal Bridges and Dante Divencenzo who also live on NBA rosters right now.

Gonzaga had Nigel Williams-Goss, Zach Collins and Josh Perkins among a plethora of talent and experience. We haven’t even gotten to Butler’s tournament region.

Butler was a four seed in the south region of the 2017 NCAA Tournament. The three teams seeded ahead of them in that region, North Carolina, Kentucky and UCLA, also made it the Sweet 16. North Carolina boasted a roster that included Joel Berry II, Justin Jackson and Kennedy Meeks, while UCLA had its best team of the decade that included Bryce Alford, Lonzo Ball and TJ Leaf.

The point of all this is quite simple. In 2016-17, there were a lot of great college basketball teams. This year, there aren’t. And that’s a really good thing for Butler.

Can you name a team that you are certain would beat Butler? Of course, there are teams that can beat Butler and teams that would be favored. But there isn’t a team in the country that Butler has no shot of beating.

So, when there aren’t any teams that are head and shoulders above everyone, it’ll come down to three things: experience, coaching and limiting mistakes. When teams have flaws and, for the most part, are evenly matched, the team that does those three things best will oftentimes come out on top.

Every player on Butler’s roster that is a junior or older has won an NCAA tournament game. In particular, Sean McDermott and Kamar Baldwin and Henry Baddley have three NCAA tournament wins. Almost just as importantly, they’ve seen that disappointment from last year as well. So, they’ve been there, and they haven’t been there.

They have experience and leadership.

Last year, head coach LaVall Jordan’s performance wasn’t the greatest coaching job of all time. Jordan and his coaching staff have been so much better than their opposing bench more times than not this season. All season, Butler has either started great, or made major adjustments at halftime and jumped on teams in the second half.

Butler jumped on Florida and never looked back. They got smoked at Baylor out of the gates, but gave themselves a chance to win because of the changes they made after the first 20 minutes. And the same can be said for Butler’s win over Purdue in the Crossroads Classic. That speaks to the level at which Jordan has been coaching.

They have the coaching.

And finally, Butler isn’t going to beat themselves. If you’re looking for one stat to turn that into tangible evidence, it’s the turnover category. Butler is sixth in the country in that category, turning the ball over just 10.4 times per game, and they have a point guard in Aaron Thompson who is 10th in the country individually in assist-to-turnover ratio.

They don’t make many mistakes.

Is it a done deal that Butler will go to the Sweet 16 or beyond? Of course not. There is still a grueling Big East schedule awaiting, and winning a game in the tournament is not easy, let alone multiple games.

With that being said, team 122 looks a lot like team 119 — and where they are different, the current Butler team has the advantage.

The stage might be set for this to be a very special season.