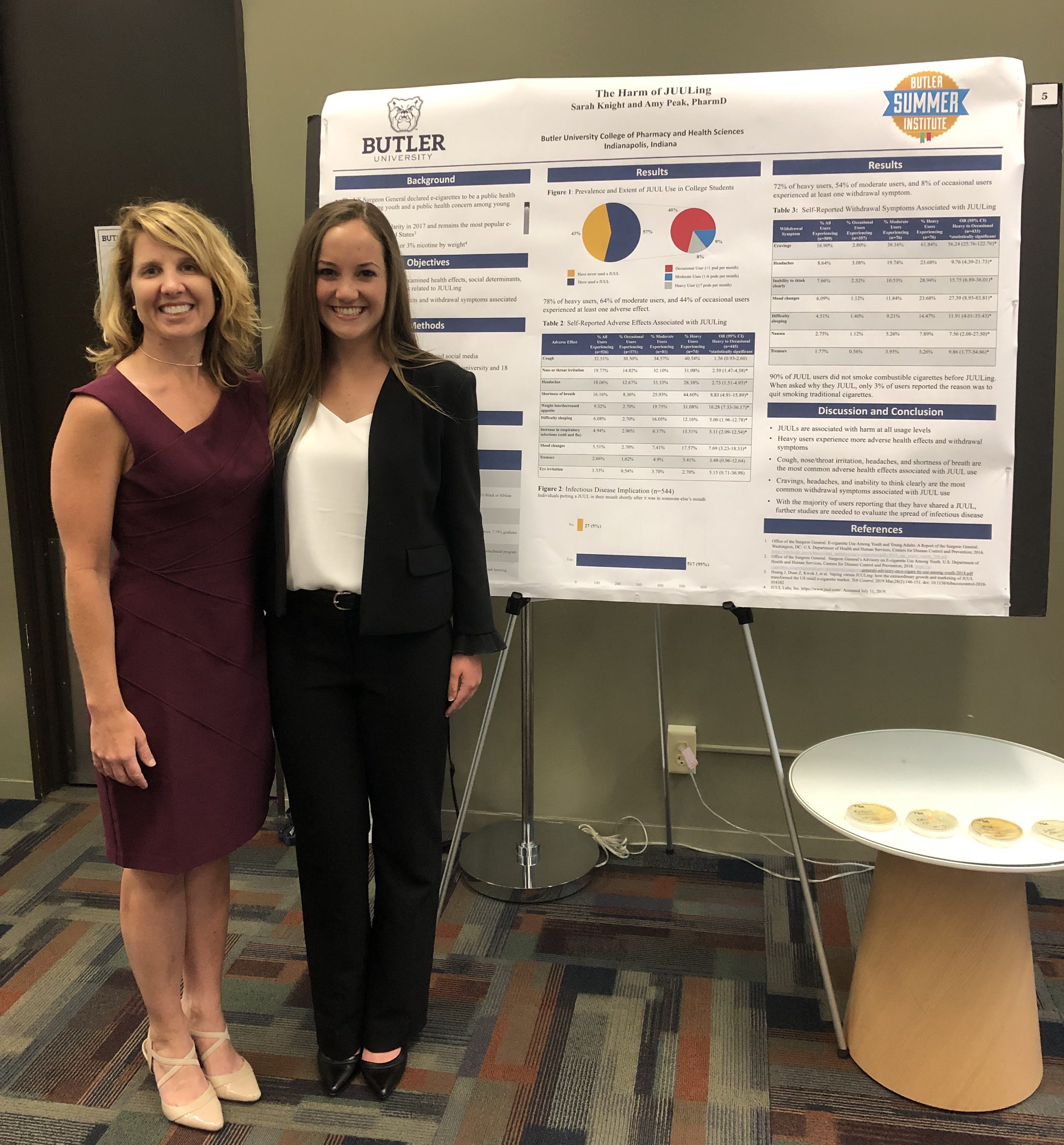 As of Nov. 5, 39 people have died across 24 states and the District of Columbia as a result of e-cigarette use, according to the Centers for Disease Control. Of patients that are hospitalized due to e-cigarette related injuries, over half are under the age of 25.

Since e-cigarettes are fairly new, with popular brand Juul beginning production in 2015, the long-term health implications are still unclear. However, this past summer, Sarah Knight, a senior health sciences major, worked alongside Amy Peak, director of undergraduate health sciences programs, at the Butler Summer Institute to conduct research on the effects of e-cigarette usage. This research, focused on the popular e-cigarette brand Juul, revealed information about demographics of Juul users, as well as information on the short-term and long-term effects of vaping.

Knight and Peak surveyed over 1,000 college students across the country about their experience with Juuling. The research was focused on the Juul brand specifically, due to its role as the leading manufacturer of e-cigarettes.

Along with the college students that were surveyed, Knight and Peak also surveyed a group of parents with children aged 13-26. From this survey, it was found that students Juul at a much higher rate than the parent age group. Fifty-seven percent of students had Juuled in the past, while only 5.9% of parents had.

Additionally, it was found that only 3% of respondents use Juul to quit smoking combustible cigarettes, or cigarettes with tobacco.

“The younger generation that are not previously smokers are uptaking this product, which leads to concern for nicotine dependence and possibly future cigarette smoking,” Knight said.

“It’s always fun to present because that’s when we get the data out there,” Knight said, “The end of BSI was very fun because [the presentation] was to a lot of peers and students and faculty.”

Knight and Peak’s research comes at a time when vaping is in the national spotlight.

In recent months, e-cigarette companies such as Juul have been making national headlines as both state and federal lawmakers have proposed legislation limiting the sale of e-cigarettes. Some laws, such as the one that passed in New York this past September but was recently overturned by a state appellate court, ban the sale of flavored e-cigarettes. Other laws propose raising the legal age to purchase e-cigarettes from 18 to 21.

“I would be absolutely supportive of [legislation limiting the sale of e-cigarettes], and I think that it will be interesting to see what actually passes and where,” Peak said. “I don’t think raising the age is going to make a difference. I do think it would be helpful if there weren’t so many candy fruity flavors.”

According to Knight’s and Peak’s research, vaping and combustible cigarettes each have their own set of associated dangers.

“To the best of my knowledge, there were never cases of people dying from cigarettes in a very short time period like we’re seeing with vapes,” Peak said.

While companies such as Juul claim they do not specifically market to younger audiences, the research that Knight and Peak conducted shows young people are far more likely to begin vaping than older people. There are over 15,000 different flavors of e-cigarette on the market today, many of which are sweet flavors that appeal to young people.

“We had made so much progress over the last 10 years of decreasing the number of young people using combustible cigarettes,” Peak said. “And just in three years time, we have completely erased all that progress.”

Peak also believes Butler University does not have sufficient policies in place to handle e-cigarette use on Butler’s campus. Butler’s smoking policy states smoking is not allowed on campus except in designated smoking areas. However, e-cigarettes are not explicitly mentioned anywhere in the policy.

“I would love to work with people across campus to revise our policies and make them appropriate for electronic devices as well,” Peak said.

“I have a friend whose roommate Juuled constantly to the point that my friend could not breathe,” Miller said. “When he reported that this happened, my friend was told he could move to a single in a different building, but his roommate was not evicted or disciplined.”

Irvington House community assistant Kaitlyn Thornton, a sophomore psychology major, has been trained by Butler to handle situations where students are caught vaping in residence halls.

“We’re just told to tell you to take them home over break,” Thornton said. “I feel like the policies need to be more strict, but I don’t know exactly how we would go about that.”

With e-cigarette use being so prevalent on college campuses across the country, Knight and Peak hope their research will help bring attention to the problems that vaping causes at Butler and beyond.