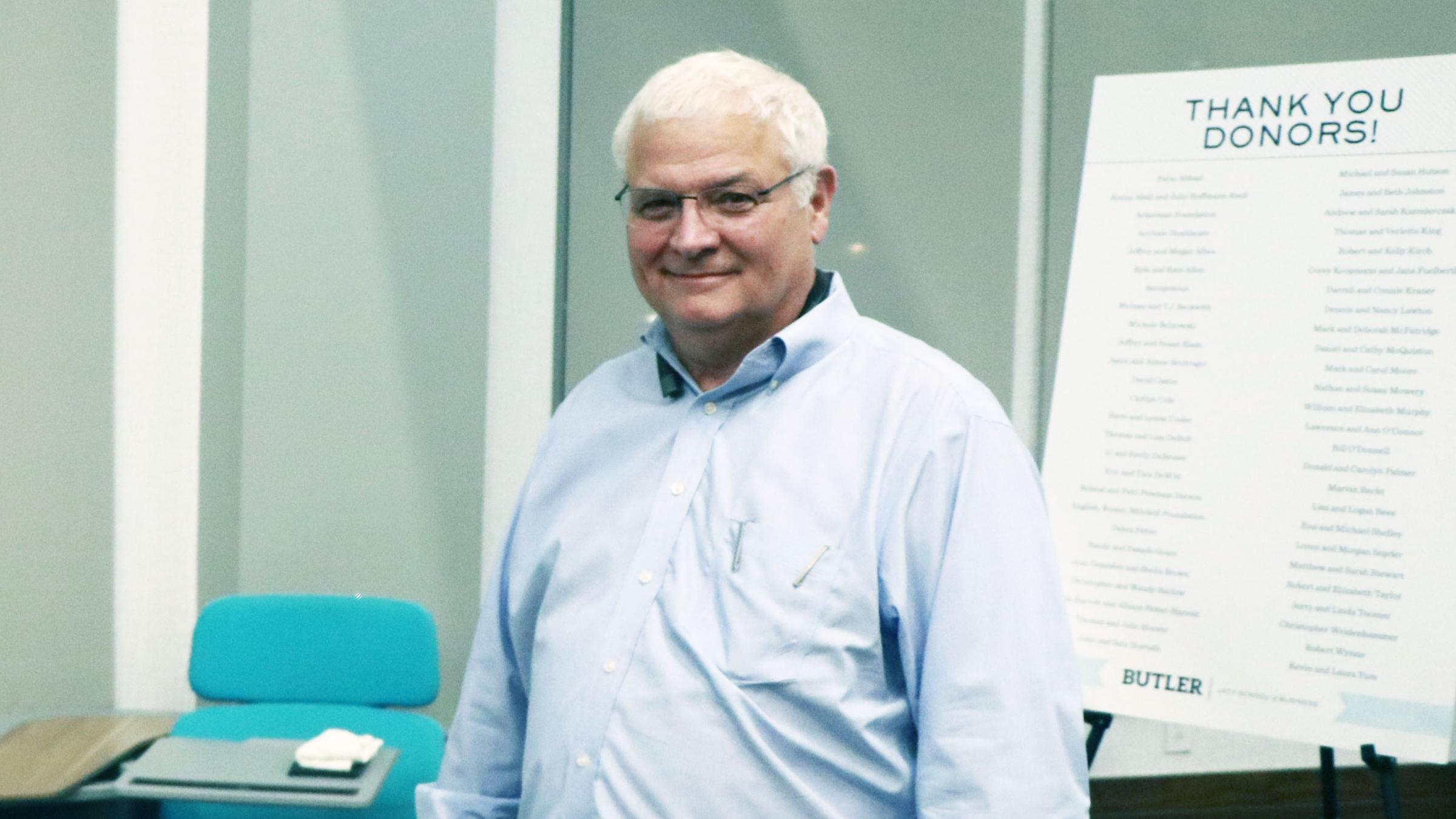 Dick Fetter’s new office is on the fourth floor of the Lacy School of Business building. His office is neat with the set up matching the modern simplicity of the new building. The room is not cluttered, with the desk taking up the most space in the office. The desk and cabinets match with a light wood color and a window situated behind Fetter’s desk faces Clowes Memorial Hall and lets light into the room.

Cabinets line the right side of the wall, and there is no sign of the Sagamore of Wabash award until Fetter reached up to pull down his framed award, which was tucked on top of his cabinets.

“I haven’t even looked at this thing yet,” Fetter said.

Fetter, the former dean of the Lacy School of Business and current associate professor of marketing, won the Sagamore of the Wabash award on Oct. 1. Fetter was a former fertilizer business owner who decided to become a member of the faculty to fix the disconnect between real world business and academic teaching.

The Sagamore of the Wabash award is the highest civilian honor given in Indiana. The governor presents the award to someone who has demonstrated extraordinary service to the state or the governor.

Don Palmer, a member of the board of trustees for the Sagamore Institute, nominated Fetter for the award due to his support in developing businesses throughout the state of Indiana.

Fetter said he felt humbled and lucky to receive recognition for his work.

“I’m a member of a team, so I never look for individual awards for myself,” Fetter said. “I think I’ve always been this way, but certainly at this stage in my career. My joy is when I help other people. The phrase I use is, ‘Let the light shine on them.’”

Fetter said he admires when people care about what they do and work hard. He said there is a custodian at the Lacy School of Business, whose nickname is Q, in whom he sees these characteristics.

“I see Q almost every morning at about 5:15 or 5:30,” Fetter said. “That guy takes tremendous pride in his work and to me, that’s as applaudable as things that I do.”

Standifird said a diverse group of people attended, including current and past students, faculty and business people.

“What’s interesting is you can point to some specific companies that you know Dick Fetter has been directly involved with,” Standifird said. “What’s tougher to measure but no less impactful, is the multitude of companies that he has supported through mentorship of different people that are engaged in the business.”

Standifird also said it is very interesting to work with someone who held your position in the past.

“It has been nothing but positive with Dick Fetter,” Standifird said. “He is supportive in the most positive of ways, and yet, he is comfortable and willing to help me identify the things that are not going well and how we can continue to improve them.”

The Dean’s Suite in the Lacy School of Business is named after Fetter, and $1 million was donated in his honor by 55 people, including graduates ranging from the class of 1962 to the class of 2016.

“I actually don’t know if we’d be the Lacy School of Business without his input and guidance,” Hatch said. “He was our connection to Andre Lacy. Dr. Fetter was also the dean of the business school when we overhauled our curriculum 15 or 20 years ago now, so our focus right now is on experiential education.”

Fetter was one of the first people Hatch met when she began working at Butler nine years ago. She said he is always willing to step up and help when she needs it.

“Last week, my son was sick, and I needed somebody to cover my exam,” Hatch said. “I emailed four or five people late that evening when I figured out I wasn’t going to be able to be here, and he wrote back right away, and said, ‘I can cover.’”

Hannah Ashby, a sophomore marketing major, said she has not had Fetter for class, but would like the opportunity to work with someone who is noted for excellence in their field.

“I think it’s a really good outlook on the business community as a whole and where it’s going,” Ashby said. “I feel a lot of pride as someone who is involved in business.”

Ashby said she thinks this award will have an impact on business students.

“I think it’ll definitely encourage business students to work hard in everything they do, and know that what they do and what they study doesn’t get overlooked,” Ashby said.