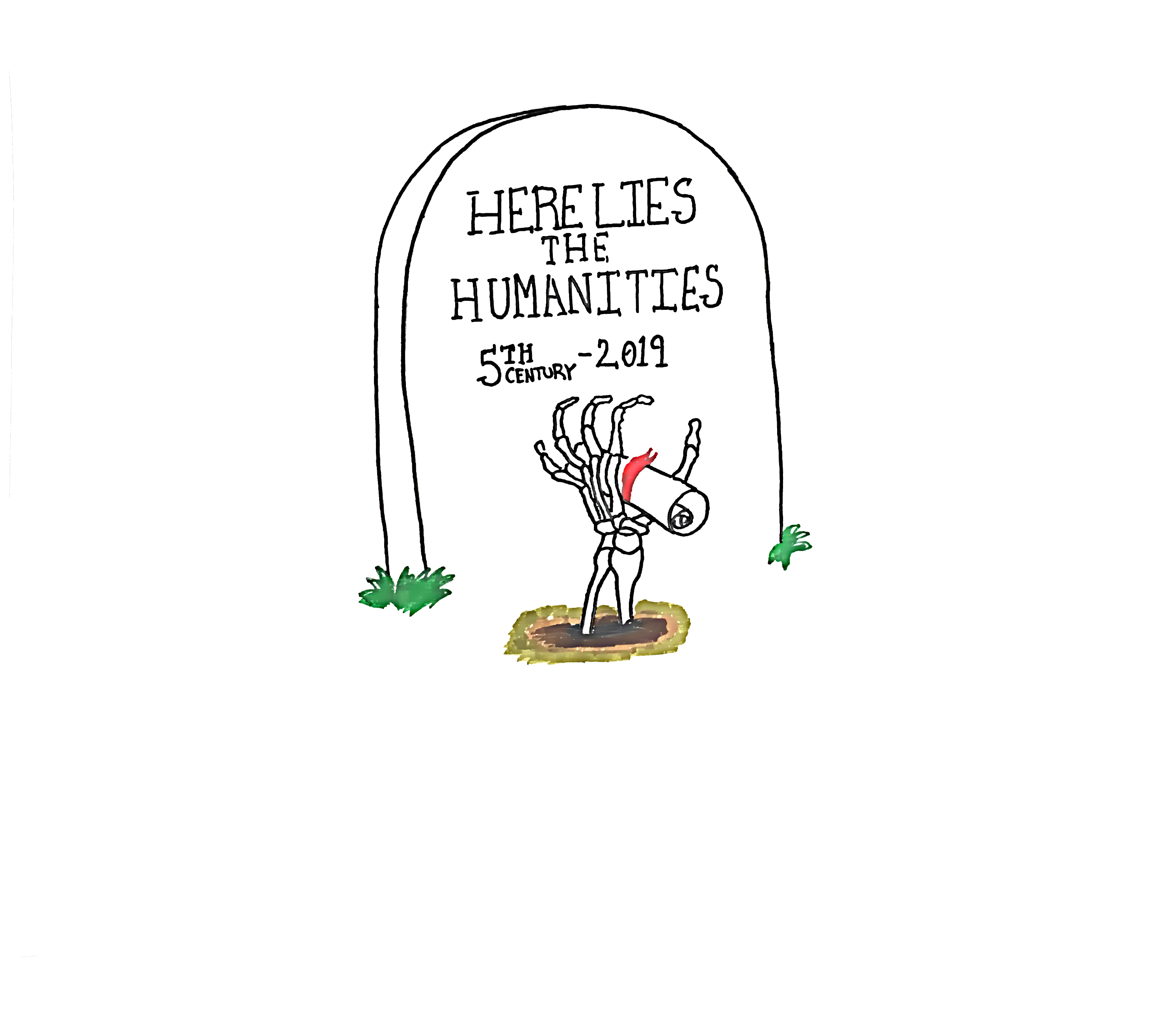 “The Slow Death of the Humanities: English Edition” is the first column of a Collegian series which will discuss the fight to keep humanities and liberal arts programs as integral offerings on Butler’s academic menu. The gradual removal of such degree plans is a national issue. As more and more universities expand STEM and business programs, higher education is often given a singular, depressing goal: to groom a future workforce.

Why study Herman Melville when you could be spending your credit hours counting pills or learning arbitrage pricing theory? Why examine historical governance of ancient civilizations, or memorize Italian verb tenses, when you could be preparing for The Real World?

After all, isn’t it your life’s mission to run the hamster wheel of  a “normal” lifestyle, securing a white picket fence and a comfy 401(k) and never challenging yourself ever again? When paying for college, why waste a dime on something that won’t ever make you a buck?

In light of the national STEM initiatives, our tech-focused environment and the general cash-directed trajectory of Butler’s academic focus, it’s natural to wonder if our university will prioritize the humanities years down the road or if such departments will fade into irrelevance.

As evidenced by enrollment numbers, students are still interested in humanities programs. So, if these departments shrink, it’s not that demand is absent — it’s that Butler is pouring funds and allocating educators elsewhere.

As of the 2018-19 school year, Butler maintains exceptional programs in the humanities and liberal arts. Students are drawn to our school specifically for these degrees, captained by outstanding faculty. But how long will these programs maintain their caliber, given the current state of funding?

It doesn’t take a genius to see that Jordan Hall, the home of such programs, is being left for dead. The bulging diapers of rainwater and drainage loom over each stairwell, and several professors have relocated offices due to mold and mildew infestations. Consider this the signifier of a deeper-rooted priorital issue, which is simultaneously a national phenomenon, too.

Robert Zaretsky, professor of English at the University of Houston, described Houston’s liberal arts building as “built a half century ago, the peeling edifice was recently drained of its asbestos.” Specifically, the English department’s space is known to be “long plagued by plumbing problems and water leaks…in a state of chronic disrepair.”

English is one of the larger departments in LAS and remains a bastion of the humanities-focused programs. Programs like the Visiting Writers series, publications such as Manuscripts, and regular community workshops extend the value of the department beyond the classroom setting. But fewer and fewer universities are placing English at the forefront of academia.

English professor Rocky Colavito understands the anxiety behind funding humanities and liberal arts programs, but remains adamant that the benefits do pay off. Is English really a marketable diploma? Colavito recommends finding a passion — and making it pay you.

“English, artsy stuff, is never going to be the equal of a professional college unless you have deep-pocketed donors,” Colavito said. “The simple fact of the matter is, English doesn’t produce an immediate, high paying position — though it ultimately leads to one.”

While it’s natural to want to be well-positioned for post-grad plans, it is much more valuable to expand your way of thinking: to learn for learning’s sake. In the long term, spending time developing your critical and communicative skills is worth the money.

The inherent value of the English programs is undeniable, but it’s hard to justify expanding it — or, you know, ridding the offices of mold — without proof of its monetary value, which is not so guaranteed. While the business school is pumping out well-endowed alumni with enough cash to fund bagel restaurants in the new Lacy building, Butler could care less if a roach infestation takes over the building across the street.

If this is the case, business and science will overtake Butler in the long run, churning out thousands of tech whizzes and CEO-hopefuls, but few artistically-motivated thinkers. As of now, touting oneself as a private liberal arts school sounds neatly elitist and intellectual; such labels are highly fashionable. But underneath the marketing schemes are hard parameters by which departments are slashed.

Look at recent Butler tactics: “Graduate doubt-free!” the tongue-in-cheek posters chuckle. “95% placement rate!” scream others. Administrative motives lay in enticing students by assuring them a successful future; the years you spend at Butler are seen as means to an end. We no longer learn for learning’s sake.

Instead, we have to justify the very existence of our studies. There’s the most irritating adage, a favorite of all annoying aunts and nosey Uber drivers: “And what will you DO with that?”

“English always has to legitimize itself,” Colavito said. “Until we get a turnaround that accepts the idea that learning is cool, participating in the creative process is a worthy avocation, English will always have to apologize for its existence. I wish it was different.”

The tools students gain from studying, discussing, and examining English curricula are actually applicable to countless post grad opportunities. Soft skills are in. Excellent communication is in vogue. Personable work attitudes are valuable. But, if Butler continues in its neglectful attitude towards the program, these features won’t be enough to keep the English program flourishing.

“I hope [our English department] doesn’t follow national trends.” Colavito said. “I’m going to give a conditional, hopeful no, but it’s getting perilously close. I think there will be some radical changes which I don’t think are for the better.”

This program is worth a functional, asbestos-free building. These professors are worth their meager salaries. These lectures, this literature, these seminars are transforming the lives of Butler students and catapulting them past the typical graduate in terms of skill set.

Stop starving the liberal arts. We deserve the humanities. If Butler can push against the national tide of popping out insta-employees and worker bees, we’ll all be the better for it.