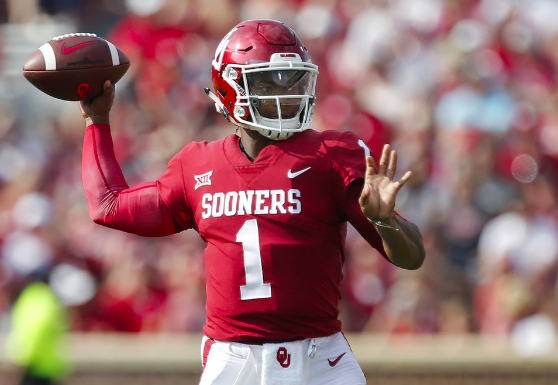 Quaterback Kyler Murray during a college football game. Photo courtesy of The Oklahoman.

For an athlete to be great at one sport is tough enough, but to be great at two sports is an anomaly. To be exceptional enough to go professional in both would make that athlete one-in-a-million.

Former Oklahoma Sooners two-sport athlete Kyler Murray meets the “one-in-a-million” mark. Throughout his collegiate years, Murray has built quite a resume for himself in both baseball and football.

In high school, Murray was a top player in both his respective sports. Murray received top draft prospects for the 2015 Major League Baseball draft, but instead committed to Texas A&M University to play collegiate baseball and football.

As a true freshman, Murray was the backup quarterback for A&M until midway through the 2015 season, when he was able to win over the starting spot. Murray showed flashes of greatness as a dual threat quarterback.

After transfering to the University of Oklahoma and fulfilling the requisite gap year, Murray returned for the 2017 baseball season and worked his way onto the field. He was able to play in a mere 27 games, and only started in 16 of them.

Although Murray struggled to break into the spotlight in 2017, he came into 2018 with a vengeance. Murray was able to earn a starting spot in the outfield for the Sooners and make his talents known. Throughout the season, Murray racked up his stats by amassing a batting average of .296, 10 home runs and 47 runs batted in — all this while cultivating a .991 fielding percentage.

Although Murray showed exceptional talent for baseball and appeared to have a professional career ahead of him after being picked ninth overall during the 2018 MLB draft, he decided to return to college for another year to play quarterback for the Sooners.

During August preseason workouts, Murray was given the starting quarterback job. He went on to produce a 69 percent completion rate with 4,361 passing yards. He also bolstered an impressive 42 to 7 touchdown to interception ratio, which is unheard of for college quarterbacks.

This historical season led to Murray being awarded the Heisman trophy and AP Player of the Year.

Murray’s electric play throughout the 2018 season led to many believing that he would be a top prospect in the upcoming 2019 NFL draft, thus creating a dilemma for him — he had to decide whether to begin his baseball career with the Oakland Athletics in the spring or take a shot at becoming an NFL quarterback.

A month after his final game at Oklahoma, Murray announced that he would forgo his promising baseball career and instead enter into the 2019 NFL draft. This news came as a shock to many in the sports world, including the Athletics, who were caught off guard with his announcement. Among other things, Murray’s decision meant forfeiting his signing bonus from his draft deal with the Athletics.

There are those who believe Murray’s decision to forgo baseball was a terrible financial decision for him. First-year business major Jacob Brassard is among that crowd. Brassard said he believes that Murray would have had a better career in the MLB for a variety of reasons.

“He can make more money through baseball,” Brassard said. “Due to the nature of the sport, he would be able to play longer and be able to have bigger and longer contracts.”

“I fancy guys that are tall,” Shurmur said. “It’s no different for a quarterback when he is behind a very tall offensive line. All else being equal, as long as all the skill sets are equal or maybe even a little better than equal, guys that can see have a chance to be very good.”

Even though Murray faces criticism, I believe he has the right tools for the job. There have been many quarterbacks under six feet tall who have had successful careers, including future Hall-of-Famer Drew Brees and Russell Wilson, both of whom have gone on to win a Super Bowl.

Murray should pay no mind to critics. His predecessor, Baker Mayfield, also received his fair share of backlash, but rose above the criticism and was drafted first overall by the Cleveland Browns. Mayfield went on to lead Cleveland to their best record in more than a decade while also placing second in the AP Offensive Rookie of the Year voting.

Murray isn’t just a passer, he’s a dynamic runner, too. For reference, he was once clocked at Oklahoma running a 4.38 40-yard dash.  He also was able to amass 1,001 yards and 12 touchdowns during his Heisman season. By NFL standards, this track record would be a solid season even for a running back.

These benefits should give him a leg up on the other quarterbacks in the draft class, even against prospects like Dwayne Haskins and Drew Lock, both of whom appear to be going in the first round.

In the end, it was Murray’s decision to choose what was best for him and his career. As he put after making his decision: “I was raised to play quarterback.” It will be interesting for football fans alike to watch the continuation of Murray’s journey throughout the upcoming NFL Combine and the draft in April.