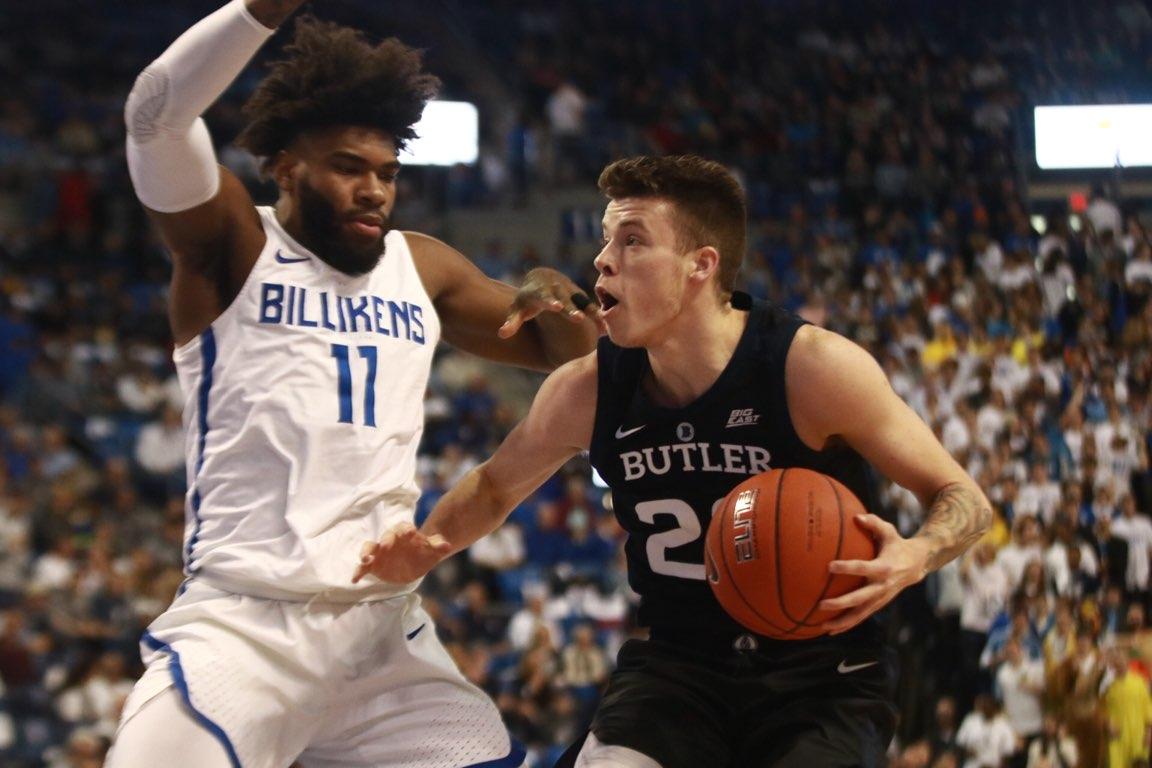 Sean McDermott drives to the basket against Saint Louis. McDermott led the Bulldogs with 12 points in the loss. Photo by Jimmy Lafakis.

The Butler men’s basketball team fell to Saint Louis in its first true road game of the season, 64-52. Butler held the lead for almost 12 minutes in the first half but trailed for the game’s final 23 minutes and 28 seconds. Here are three takeaways from an ugly loss.

1. Butler failed to take care of, or move, the basketball.

In the first half, the Bulldogs turned the ball over 11 times. They averaged 10 turnovers a game coming in. Butler coughed the ball up 14 times in the contest and recorded only four assists. The offense was rushed and without any kind of flow. Kamar Baldwin and Aaron Thompson combined for eight turnovers and were unable to establish a sense of calm within the team. When primary ballhandlers are careless and can’t effectively initiate the offense, two halves scoring under 30 points can very easily be the result.

When the Bulldogs didn’t turn the ball over, it stuck with one player way too often. They only assisted on 22 percent of their made field goals. In the second half, Butler failed to generate a single assist. The Bulldogs responded to the Billikens’ defensive pressure by trying to force the issue individually. They got away from everything that makes them such a difficult team to guard. Priority number one for LaVall Jordan is restoring this team’s identity on the offensive end, which starts with passing the ball well.

The Bulldogs’ 30-24 halftime deficit could have been much worse considering Baldwin missed all five shots he took, committed three turnovers and didn’t contribute a single assist. As the Billikens closed the half on a 12-0 run, he was still nowhere to be found. Baldwin’s first points came with 4:55 remaining in the game and he finished with six on three-of-17 shooting. Butler simply isn’t beating quality opponents when he plays this poorly.

Without Butler’s best player making any kind of impact offensively, the rest of the team looked lost. Scoring was a constant struggle and there was no sense of purpose or direction to what the Bulldogs were doing. Even on a rough shooting night, Baldwin simply has to find other ways to impact the game in a significant way. He is far too important to the Bulldogs for him to go nearly 35 minutes before registering a single point or assist. The fact that Butler managed to stay in this game is a testament to its defense and depth.

3. The Bulldogs are officially fans of the Atlantic 10 conference.

Butler’s NCAA Tournament resume will be significantly impacted by what the Atlantic 10, specifically Dayton and Saint Louis, do the rest of the season. Falling on the road to the Billikens, who are well on their way to earning a spot in the Big Dance, is not a big deal in the grand scheme of things. However, two losses to teams from a conference that has generally been unimpressive so far absolutely puts an added pressure on Butler to avoid another bad loss during nonconference play.

The strength of the A-10 is absolutely something to keep an eye on moving forward. Butler’s NCAA Tournament hopes still rest primarily on what happens during Big East play, but two defeats against a poor league can absolutely alter seeding and its overall body of work. The Bulldogs have plenty of games left to enhance their resume and make these two losses practically irrelevant. Until that happens though, Butler has to hope the A-10 can improve its credibility and minimize the impact of its 0-2 record against the conference.