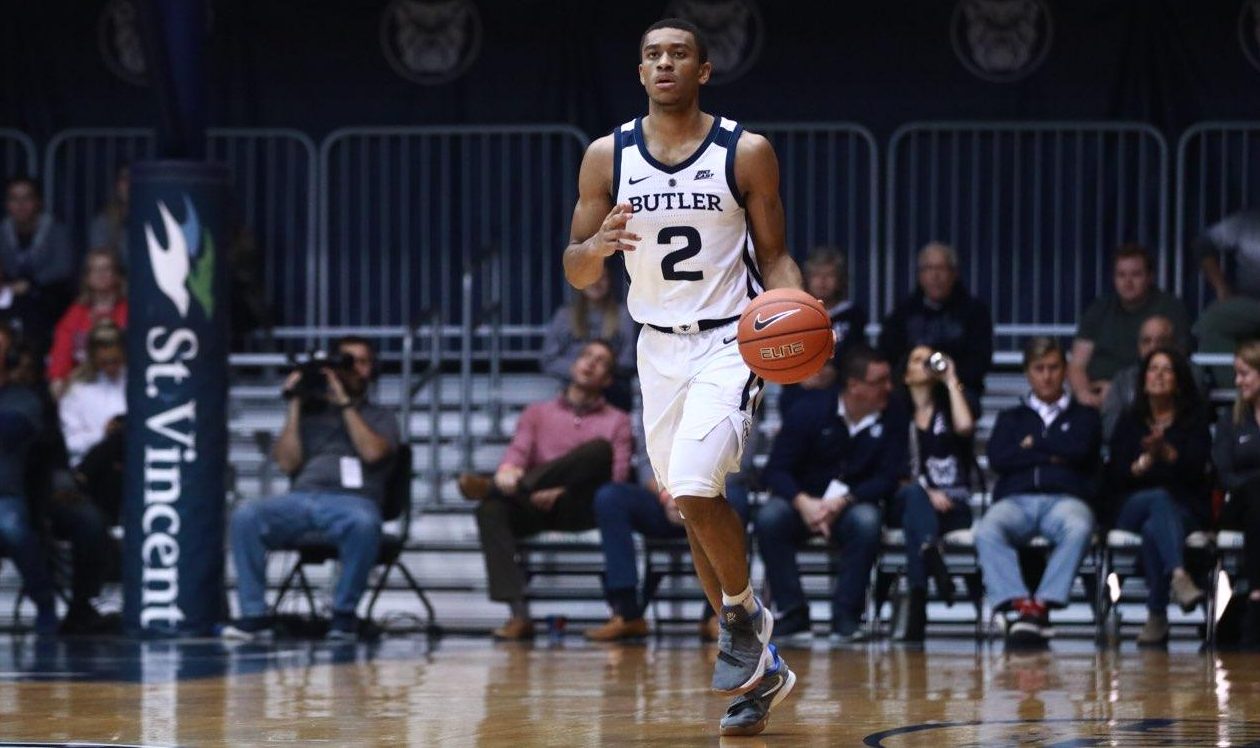 Aaron Thompson brings the ball up the floor. Thompson had a career-high 18 points in the win over Presbyterian. Photo by Jimmy Lafakis.

The Butler men’s basketball team got back in the win column with a 76-67 victory over Presbyterian. Butler struggled from the start and trailed by one at halftime. The Bulldogs led for less than 17 minutes in the game. Here are three takeaways from a sluggish win.

It certainly appeared that the heartbreaking loss against Indiana was still on the Bulldogs’ minds when they took the floor. They missed six of their first eight shots and offered very little resistance on the defensive end. Presbyterian made nine straight baskets in the first half, part of an 11-for-12 stretch for the Blue Hose. Eight minutes and 23 seconds into the game, Butler trailed 25-11. For the first 20 minutes, Butler looked like a team still dwelling on the past instead of focusing on the task at hand and Presbyterian took full advantage.

The Bulldogs stepped up their intensity and held Presbyterian to 29 percent shooting in the second half. They scored 35 points of their own and held the Blue Hose to 25. Butler was the better team over the full 40 minutes, but it was by no means a convincing performance. The Bulldogs could only extend their lead to 12 and it never felt like they were in complete control. There are going to be more disappointing defeats in the future. Butler’s ability to put those losses behind them and play with urgency from the opening tip will be a significant factor in determining how this season turns out.

2. Aaron Thompson has taken his game to a completely different level.

Over his last three contests, Thompson has registered 29 points and connected on 13 of his 16 shots. He’s also contributed 21 assists while only turning the ball over nine times. Against Presbyterian, he entered halftime with 11 points on 5-of-5 shooting and four assists. He finished with a career-high 18 points and added seven assists to boot. In a game where Butler was far from the best version of itself, Thompson provided a much-needed boost.

What he’s done defensively is even more impressive. Davon Bell entered this game with 14 turnovers the entire season. With Thompson as his primary defender, he committed seven. Even when he’s not scoring, Thompson is an incredibly valuable member of this team and can have a significant impact on a game. Now that he’s growing in confidence on offense and becoming more assertive, teams have to guard Butler differently. Thompson is quickly evolving from an offensive liability to a really nice complementary piece capable of breaking down defenses.

3. 3-point defense was a major issue in the first half.

Both teams made six 3-pointers in the game’s opening 20 minutes but the Bulldogs needed four more attempts to do so. The Blue Hose connected on their first five triples and were 7-of-10 early in the second half. They came in shooting 40 percent from deep as a team, so their ability to hit threes is no secret. However, Butler made life incredibly easy by consistently leaving guys open and getting sucked into the paint. LaVall Jordan was clearly frustrated with his team’s failure to execute the defensive gameplan.

Butler figured things out in the second half, holding Presbyterian to three makes on 15 3-point attempts. Those adjustments and the fact that the Bulldogs’ first 10 opponents shot 34 percent from deep suggest the first-half barrage was simply an aberration. With a road game against Florida and Big East play quickly approaching, Butler needs to learn from Presbyterian’s success and make sure it doesn’t become a trend. This team is not at a place where it can afford to lose the 3-point line on a regular basis.