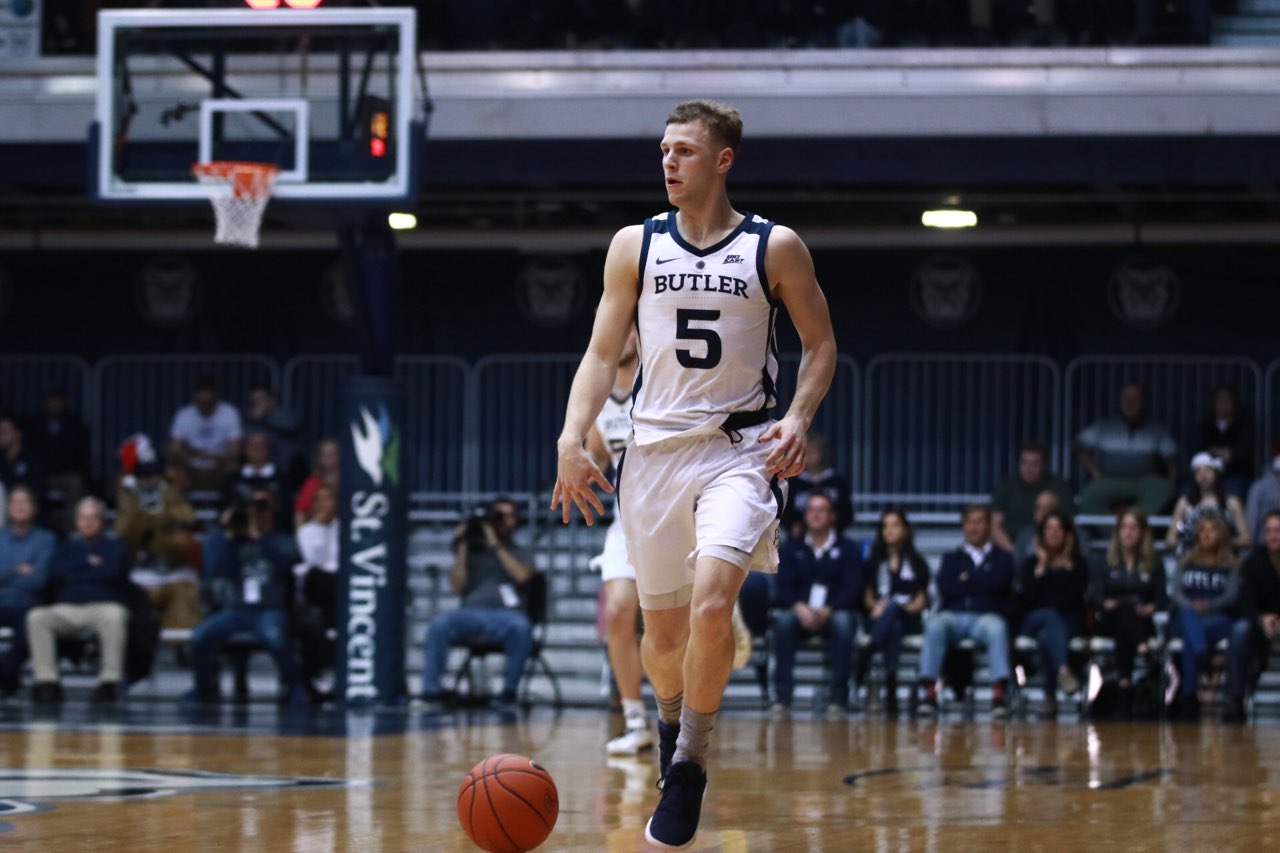 Paul Jorgensen dribbles down the court in Butler’s win over Presbyerian, 76-67. Jorgensen was held to four points on 1-5 shooting. Photo courtesy of Jimmy Lafakis.

After being away from home, the Hinkle Fieldhouse faithful was a welcome sight.

It started off slow for the Bulldogs, as Presbyterian came out firing from three. Butler couldn’t match the offense, and went down 14 early.

But it was sophomore Aaron Thompson who powered the team through the deficit, and eventually, a hard-earned win.

And with his performances as of late this season, Butler fans should get used to him being a leader on the court.

Aaron Thompson is a player that you should have bought stock in last season but if you haven't…buy stock now. #Butler

He’s truly a fluid basketball player, perfect for a Butler system that his highly structured.

Aaron Thompson has a career-high 18 points and the Bulldogs have a 70-59 lead with 3:35 to play..#GoDawgs pic.twitter.com/x7D6mT5RMY

And when he’s on, the opposing side doesn’t stand a chance.

So cute how #5 thinks he can score 1v1 against Thompson

Aside from the Thompson takeover, Butler fans were equally excited about what they saw from Jordan Tucker in his home debut.

Butler is trailing by 1 at home in the 2nd half to the 263rd ranked team on KenPom and Butler fans are excited right now. That's how promising Jordan Tucker looks. He can be that missing piece.

And his shooting and rebounding ability have Bulldogs fans shouting for more.

Why Tucker is not getting any more run is something I do not understand one bit.

It wasn’t the usual Baldwin, Jorgensen, and McDermott show that we’ve been accustomed to seeing this year, but championship teams are able to win games in multiple ways. Butler proved it can do that tonight.

It's still Presbyterian, obviously, but it does matter that Butler is finding other places to get points and help for Baldwin. Starting to get some versatility offensively.

However, it was just Presbyterian. And some fans are wondering when/if changes are coming. Below would be a fan favorite lineup. While we might not see this in the near future, this is a likely combination for the start of the 2019-20 season.

No need to make selections. I already did it for you.

In the end, a win is a win. The Bulldogs move to 8-3. They will next host UC Irvine on Friday, Dec. 21 (debuting the blue jerseys, no less) before they gear up for their showdown against the Florida Gators in Gainesville.