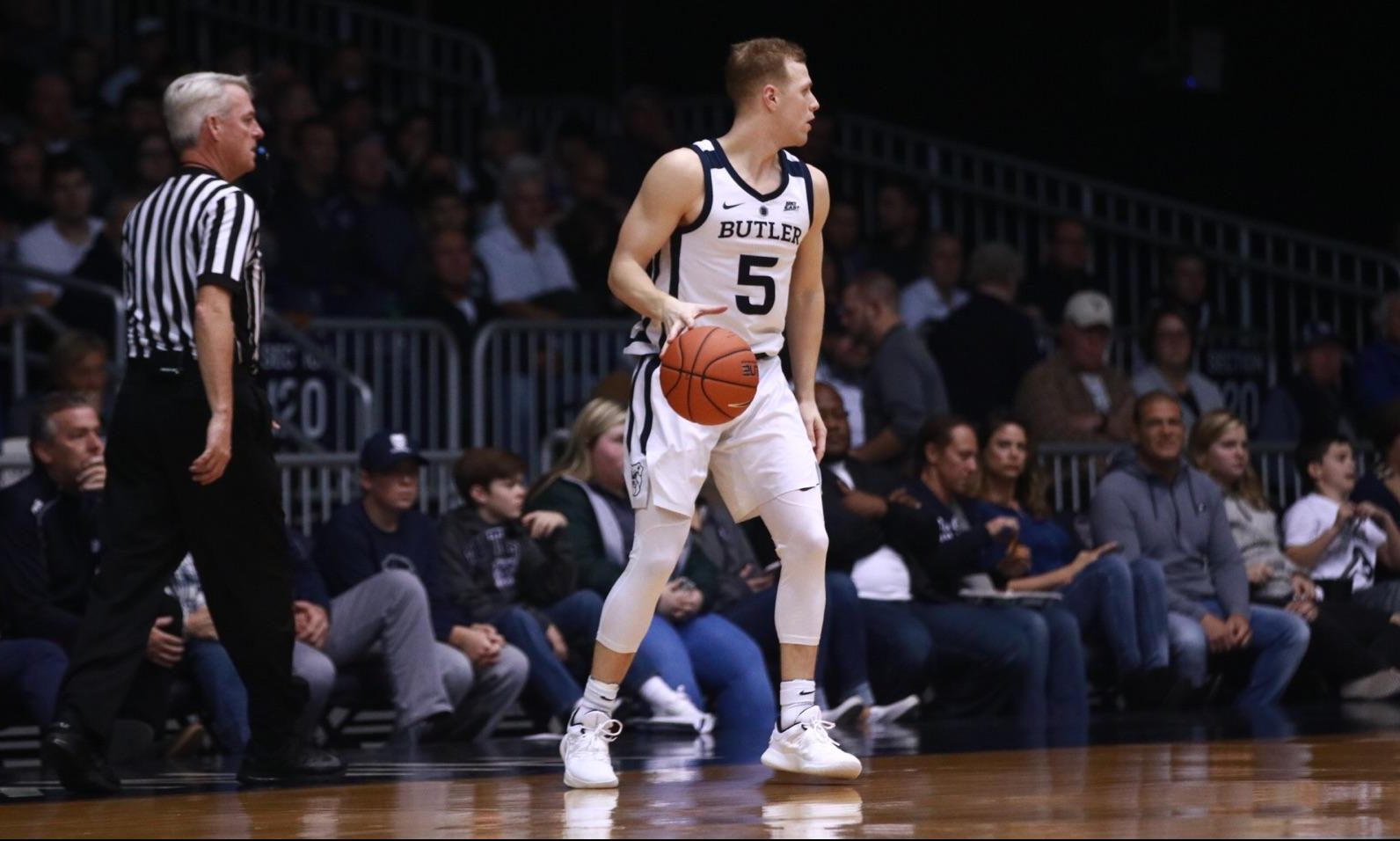 Paul Jorgensen dribbles the ball around the perimeter. Jorgensen scored a career-high 27 points in the win. Photo by Jimmy Lafakis.

The Butler men’s basketball team pulled out a third straight victory to start the season, defeating Ole Miss 83-76. Butler ended the game on a 20-8 run after the Rebels took a 68-63 lead. Here are three takeaways from an incredibly gritty win.

Jorgensen nearly set a new career high in the first half, dropping 21 points on 12 shots. He finished with 27. Even more impressive, he accounted for 33 percent of the Bulldogs’ points while only taking 31 percent of their shots. On multiple occasions when Butler needed a spark in the first half, Jorgensen got a bucket and infused some much-needed energy into the crowd. In a game where the Bulldogs really struggled with their decision-making, he did not commit a single turnover and dished out two assists. Those numbers say it all.

There were be a few games this season where Jorgensen explodes like he did against the Rebels, simply because of his streaky nature. His first outburst could not have come at a more opportune time. Without him, Butler almost certainly loses this game. Another benefit is the confidence Jorgensen is bound to have heading into the Battle 4 Atlantis tournament. He’s a confident player even when his shot isn’t falling, but can be absolutely electric when he gets into a rhythm early. He was absolutely magnificent and single-handily kept Butler’s offense afloat at times in the first half.

The combined 29 percent shooting is concerning enough on its own. Throw in the nine assists compared to five turnovers and the numbers look even bleaker. Baldwin, who came in averaging 23.5 points per game, did not score until there was 4:25 remaining in the first half. His 17 points after halftime were crucial, but he still only made three field goals. Thompson failed to register a point until the 5:23 mark of the second half. If Jorgensen doesn’t have the best game of his career, the ineffectiveness of Butler’s other two guards is the biggest story coming out of this game.

Baldwin turned the ball over 11 times in the team’s first two games, so the four turnovers don’t stand out initially. However, there was a stark contrast in the kind of turnovers Baldwin committed. Two times in the first half, he threw the ball directly to Ole Miss defenders. These were generally bad choices, not getting caught trying to do too much, which will happen to any player with the kind of offensive responsibility Baldwin has. If the Bulldogs face Virginia’s vaunted defense in the Bahamas, Thompson and Baldwin need to be smarter with the ball in their hands.

3. The Bulldogs’ bench is turning into a real weapon.

Through three games, Butler’s bench has produced 69 points. The drastically improved play of Joey Brunk is certainly a big reason for that, but Brunk is not the only bench player making a significant impact. Henry Baddley and Christian David have both scored six or more points at least once this season. With the additions of Jordan Tucker and Markeese Hastings coming in the next month, the Bulldogs will be even deeper.

In the immediate future, Butler’s depth allows LaVall Jordan to feel confident resting Baldwin and the other starters. Baddley and David in particular offer something different with their length and ability to guard multiple positions. Right now, Jordan has eight guys he can completely trust. By the time conference play starts, it might be 10. Heading into next season, the Bulldogs should be bringing back between five and seven players with significant playing experience under their belts. In today’s college basketball world, that’s a massive advantage.