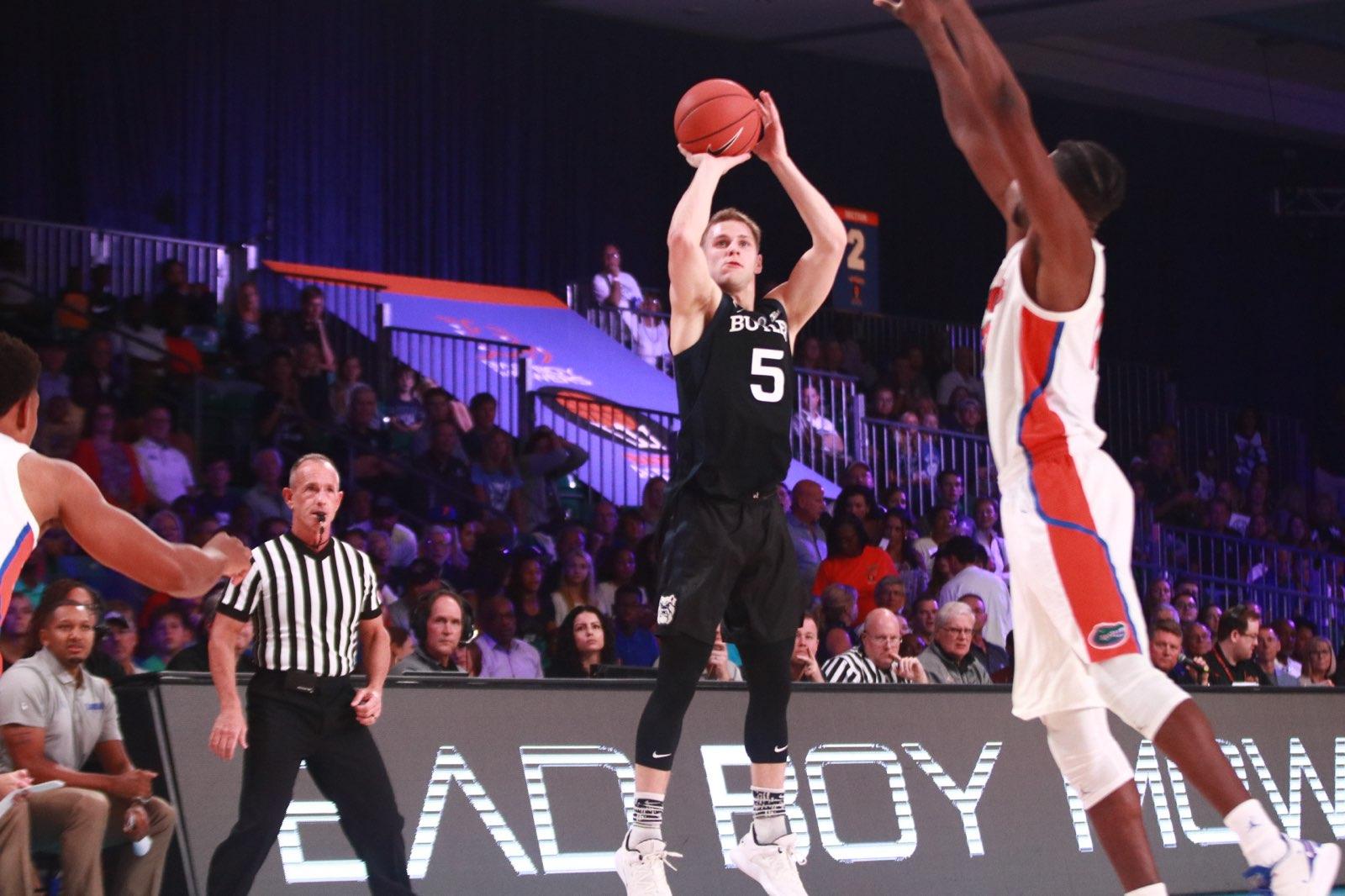 Paul Jorgensen rises us for a shot against Florida. Jorgensen finished with 16 points and seven rebounds. Photo by Jimmy Lafakis.

The Butler men’s basketball team closed out the Battle 4 Atlantis tournament with a 61-54 win over Florida. Butler held the Gators to 22 points in the second half to overturn a halftime deficit. Here are three takeaways from an impressive and significant victory.

1. This game was won behind the 3-point line.

Of Florida’s 32 points in the first half, 21 of them came from their seven made 3-pointers. The Gators entered their matchup with Butler shooting 32 percent from deep as a team but hit 47 percent of their attempts in the opening 20 minutes. Butler only connected on four of its 13 3-pointers before halftime. Florida’s five-point lead at the break is a testament to how many other things the Bulldogs did well. If the 3-point line was more balanced, Butler is ahead when the second half starts.

Butler came out of halftime and promptly hit its first three shots from deep and finished three-for-seven in the half. The Gators went ice cold, connecting on only one of their 12 3-pointers. Give Butler credit for withstanding the early barrage and making the necessary adjustments on the perimeter defensively. When the Bulldogs win the 3-point line, they’re an incredibly difficult team to beat. This game was no different; Butler’s 35-30 edge in 3-point percentage made the difference in a tight contest. The more Florida’s perimeter shooting regressed to its average, the more the Bulldogs’ took control.

2. Butler’s defense is rounding into form.

The Gators came into the game averaging 70 points per contest and finished 16 points below their season average. For eight full minutes in the first half, Florida did not make a single field goal. In a related matter, Butler went on an 11-1 run and took a six-point lead during that stretch. The Bulldogs held the Gators to 35 percent shooting for the game and an impressive 29 percent in the second half.

Having terrific individual defenders like Aaron Thompson and Henry Baddley does not automatically guarantee a team will be great on that end of the floor. Talent is important, but so are communication and helping each other out. When Butler was smothering Florida’s offense, all five guys on the floor were operating as one cohesive unit. The switches were fast and everybody made rim protection the top priority. If the Bulldogs consistently play with this kind of intensity on defense, they will be in every single one of their games.

3. Battle 4 Atlantis was absolutely a success.

For a second straight season, Butler rebounded from a poor performance in its first Thanksgiving tournament game to leave with a 2-1 record. The Bulldogs also picked up a high-quality win over a very good Florida team. If they can go to Gainesville and beat the Gators again in just over a month, their resume will receive a massive boost. Even splitting the two games with Florida helps Butler’s case for the NCAA Tournament. A winning record at a tournament as good as Battle 4 Atlantis does wonders for the Bulldog’s confidence now and their body of work at the end of the season.

After the loss to Dayton, this tournament could have gotten incredibly stressful. The Bulldogs made sure that did not happen and return to Indianapolis with a much better understanding of who they are as a basketball team. Playing in something like Battle 4 Atlantis is always a valuable learning experience, but coming out with two wins gives it a whole new level of significance. While Butler’s still only played six games, it’s clear this team is every bit as good as last year’s, if not better.