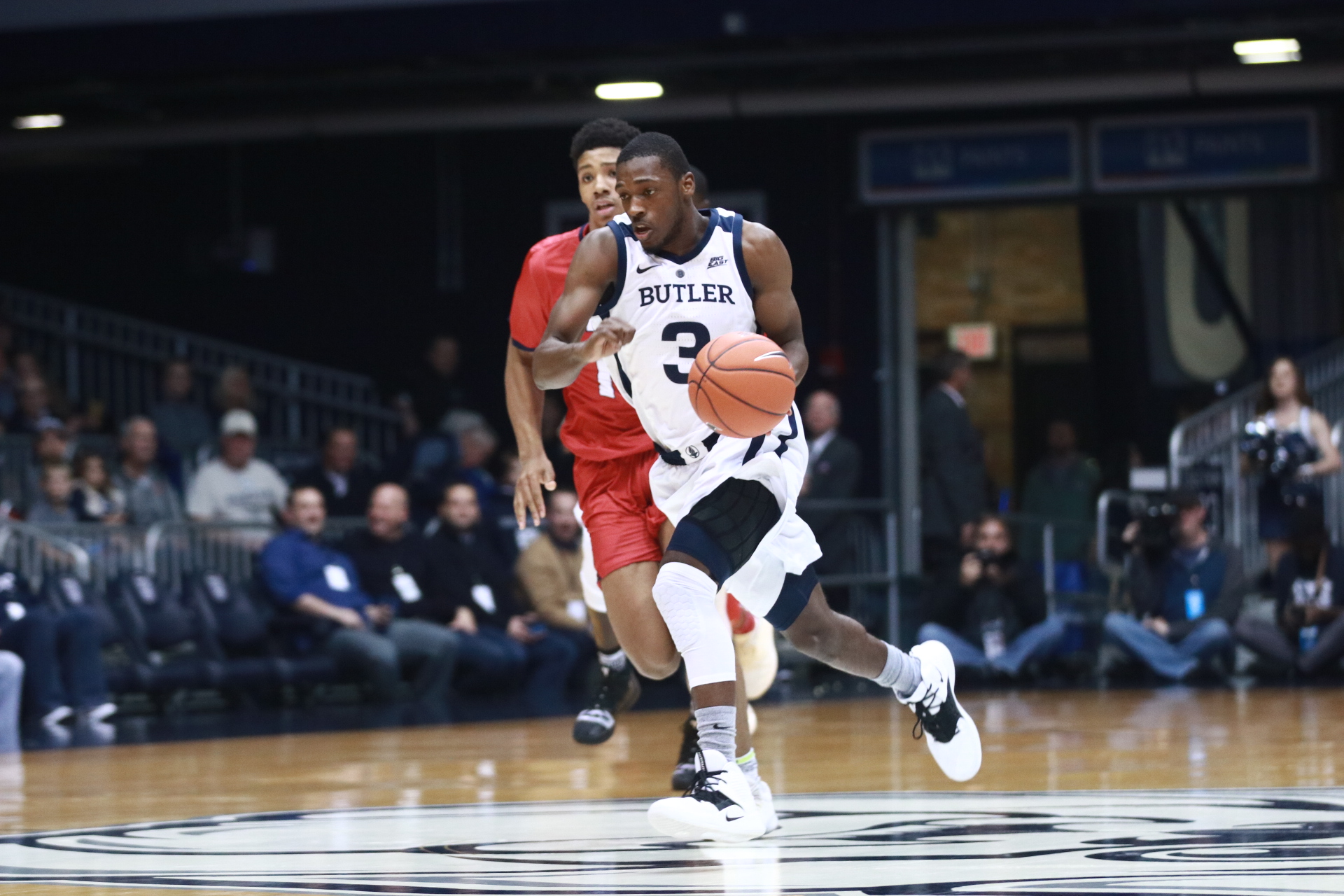 Kamar Baldwin dribbles down the court. He had 26 points, 8 rebounds, and 6 assists in Butler’s 84-63 win over Detroit Mercy. Photo by Jimmy Lafakis.

In a matchup against old conference foes, Butler hosted coach Mike Davis and the Detroit Mercy Titans. Before this one even started, a touching moment to recognize 98-year-old WWII vet, Harry Wolfe.

As for the game, Mike Davis son, Antoine, was in the top ten in the nation for scoring, coming in at 31 points per game.

Out at Hinkle again tonight, in part because Mike Davis is here with Detroit Mercy. His son Antoine has scored 62 points in his first two collegiate games.

He finished with 20, but 13 came in a flurry in the second half. Overall, though, he finished shooting 7 for 21 which could have been because he was feeling under the weather.

Detroit Mercy coach Mike Davis said his son, Antoine, was sick and probably should not have played. Antoine led Titans with 20 points, 18 in the second half.#Butler

Davis and son also picked up a technical each, which prompted this gem.

Does Mike Davis lead the NCAA in whining at the refs?#AskingForAFriend

For Butler, it started off worrisome as Sean McDermott left the game due to a back injury just a couple minutes in tonight’s game. He would only be out for a few minutes and would return to score eight points.

Sean McDermott just went flying in for a rebound and came down really hard on his back.

For as loud as Antoine Davis’ 20 points were, Baldwin flew under the radar and stuffed the stat sheet.

For Butler fans, it was a welcome sign to see that Joey Brunk’s career night on Saturday was no fluke. He poured in 13 more tonight.

Brunk's got 28 points in 37 minutes thus far for @ButlerMBB. With Tyler Wideman gone, Brunk's role was going to increase. He's delivering for the #Dawgs.

But it was his energy that picked up the team when the Titans would go on some runs.

Brunk’s energy and intensity is infectious and awesome

At this time it is worth pointing out Joey Brunk has 100 more college basketball games to play in his career.#Butler

Which prompted some absolutely factual statements.

JOEY BRUNK IS THE BEST CENTER IN BASKETBALL, WELCOME TO MY TED TALK!

Overall, though, this game was played pretty sloppily on both sides. Butler struggled with Detroit’s zone, which will provide them something to work on in practice.

Final stats are below. The Bulldogs play next on Nov. 16. They’ll take on the Ole Miss Rebels out of the SEC in Hinkle Fieldhouse at 8 p.m.

FINAL: #Butler 84, Detroit Mercy 63. It was not the prettiest game but the Dawgs still rolled. Kamar Baldwin led the way with 26p/8r/6a. #GoDawgs