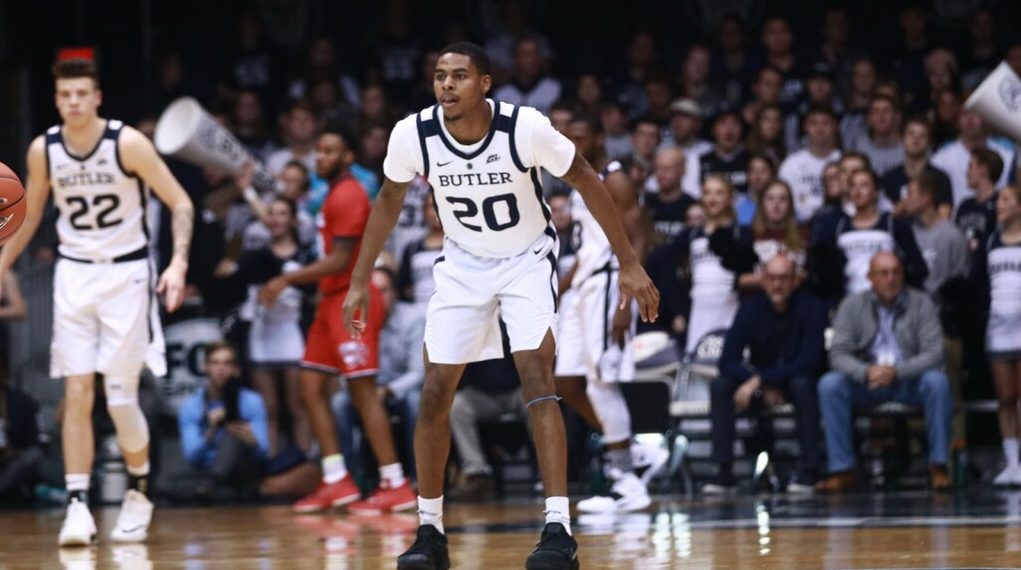 Henry Baddley gets into position on defense during Butler’s 84-63 win over Detroit Mercy on Nov. 12. The Bulldogs improved to 2-0 on the season with the victory. Photo by Jimmy Lafakis.

It wasn’t always pretty, but the Butler men’s basketball team came away victorious in their second game of the season, defeating Detroit Mercy 84-63 to move to 2-0 on the year. Here’s a quick look at 10 key quotes from after the game.

On the game overall: “I thought we had some really, really good moments there, but I thought [Butler] did a great job of … every time we made our run they made their run.”

On Butler: “They’re a good team, they’re a very good team. Their guards are good defensively. They share the basketball, the spacing is really good. You have three or four guys that can really shoot the basketball. … Any time you’ve got three really good shooters on the court and then you have [Aaron Thompson], who can really get to the basket, he’s really athletic and he’s strong.”

On Detroit Mercy: “A lot of credit goes to coach Davis and Detroit. We talked yesterday about them and walked through some things. And then we talked about them again today. We knew how much fire power they had, especially between the two guards. … I think they’ve got a chance to be a really good team, and we knew it was going to be a game.”

On responding to Detroit’s zone defense: “I was proud of our guys, just for responding. It was a night where we missed some shots we normally make. I think the zone had us stagnated more than we wanted it to. We started to go inside with Joey and Nate and … get some good opportunities from that.”

On Butler’s defense: “Defensively, Kamar [Baldwin] and Paul [Jorgensen] and Aaron [Thompson] and Henry [Baddley] … those two guards are a load, so they did the best job they could on them. I thought for the greater part of things we played fairly well. We’ll go back and look at the film and learn from it.”

On the effects of Butler’s quick turnaround: “We didn’t get to really practice against [Detroit’s zone defense.] So it wasn’t a normal [situation], where you get two days and kind of get a flow, make some mistakes in practice and talk about it. It’s just one day to go through it, talk about it, see it on film. We knew early it would take a second to feel it out and just get a feel for how long they were, how quick they were, how quick they were to recover when we found open spots.”

On Butler’s struggles from the 3-point line: “We can’t settle for only threes. We’ve got to take the ones we like, we have to take the good ones, and I thought we took good ones … some of them just didn’t fall.

On playing against Detroit’s zone defense: “It took us a little time to get used to it. … I feel like once we adjusted to it, we got some touches inside with Joey [and] Nate, we did good with it.”

On finding driving lanes later in the game: “I just ball faked. Joey and Nate set great screens that allowed us guards to get in there, penetrate.”

On finding offensive chances in the paint: “Our guards did a great job of hitting Nate and I when we had the one-on-one opportunities inside.”