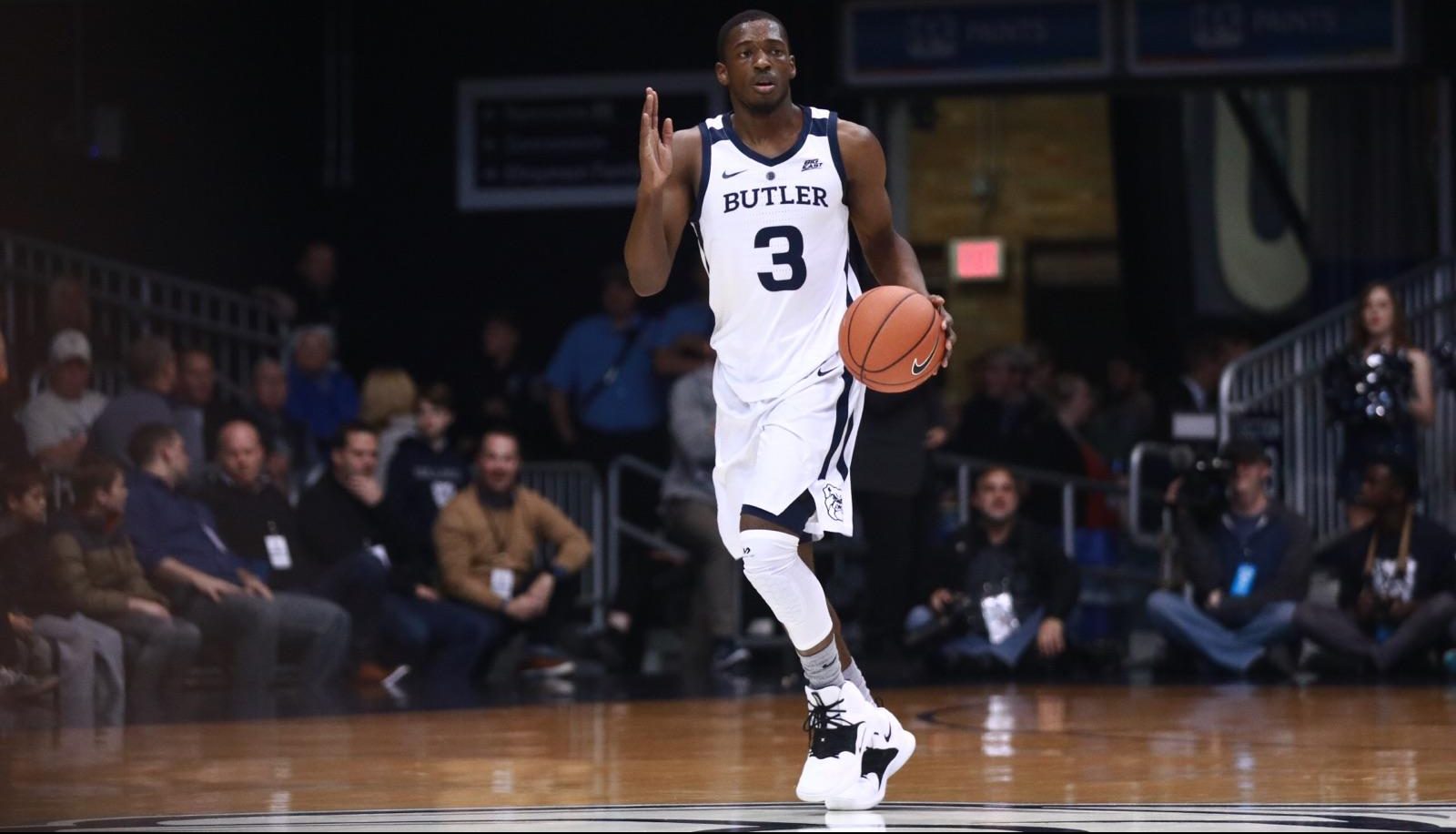 Kamar Baldwin brings the ball up the floor. Baldwin scored a game-high 26 points in the win. Photo by Jimmy Lafakis.

The Butler men’s basketball team picked up its second win in as many games, defeating Detroit Mercy, 84-63, at Hinkle Fieldhouse on Nov. 12. Butler came away with a comfortable win, but not without some bumps along the way. Here are three takeaways from the Bulldogs’ 45th straight nonconference victory at home.

1. Butler fell in love with 3-pointer and paid the price.

Of Butler’s 29 field goal attempts in the first half, 14 of them came from beyond the arc. Those 14 3-pointers accounted for only nine of the Bulldogs’ 40 points. Especially during the game’s opening 10 minutes, Butler settled for long jumpers instead of attacking the middle of Detroit’s zone. In the final 10 minutes of the first half, the Bulldogs only took five threes and went on a 25-8 run. While there were other factors involved, it’s certainly not a coincidence that Butler built its lead when it stopped launching three after three.

Things did not improve after halftime, as the Bulldogs went four-of-12 from deep in the second half. This is not the only zone Butler will see this season, so it will be interesting to see what kind of adjustments the coaching staff make. The Bulldogs won’t shoot 27 percent from three every game, but there’s a valuable lesson to be learned here. If Butler continues to take 26 3-pointers and can’t make them consistently, teams are going to clog the lane and force the Bulldogs to beat them from beyond the arc.

2. The backcourt did its job defensively.

Detroit’s six-for-16 performance from deep and 44 percent team field goal percentage are a testament to how well Butler played on the defensive end. Even more telling is Antoine Davis, who entered the game averaging 31 points a contest, finishing with 20 on seven-of-21 shooting. Davis recorded the first points of the game and didn’t score again until the 16:51 mark of the second half. He missed nine straight field goals between his first and second makes of the game.

While Davis erupted for 13 points in 134 seconds early in the second half, Kamar Baldwin and Aaron Thompson made him work for almost everything. With a player like Davis, the key is making them inefficient. Completely taking them out of the game isn’t realistic, though Baldwin, with help Thompson and other teammates, managed to do so for 20 minutes. Moving into Big East play, Butler’s ability to stifle high-level guards is a massive advantage in a conference full of them. Davis provided a nice early test to prepare for what’s coming later.

Despite a good but not great shooting night – 52 percent from the field – Butler assisted on 18 of its 29 made field goals. There would be much more cause for concern if the ball was sticking and shots were not falling. The Bulldogs still finished with 84 points, five more than last year’s season average. Baldwin, Thompson and Paul Jorgensen all had at least four assists, yet another encouraging sign. Even with only 80 minutes to evaluate so far, it is clear this team can really pass the ball.

Especially since Baldwin is the only established scoring threat the Bulldogs have, moving the basketball at a high level is absolutely essential. Butler might not have a roster full of guys who can create their own shot, but everyone who sees the floor is capable of taking advantage when a teammate sets them up. The seven different Bulldogs who finished with at least seven points in this game further illustrate how balanced Butler is.