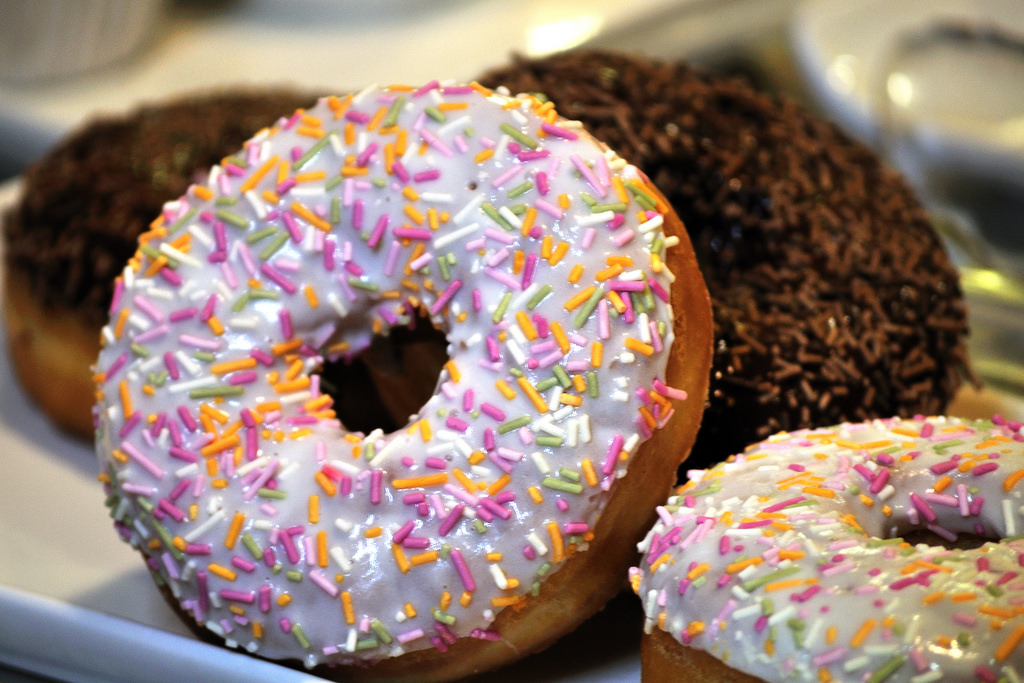 Long’s Bakery and Dancing Donut are among some popular places to buy donuts in Indianapolis.

Donuts — with their different toppings, flavors, cremes, and jellies — are a popular breakfast food for many. And because of their convenience, they are an ideal food for college students on the go. Below is a list of the top five places to get donuts in the Indianapolis area; this list has been compiled from both student testaments and online reviews.

Alex Jensen, a senior English major, described the universal appeal of donuts: “Donuts are a good sweet bread and everyone likes sweets, and bread has brought people together for millenia. Therefore, donuts are the great peacemaker.”

Long’s Bakery is famous for their simple classic donuts and no fuss decor. Made fresh daily, their donuts range from classic glazed to jelly, chocolate and sprinkles. Another specialty of Long’s Bakery, according to the various five-star TripAdvisor reviews, is their brownies.

“They’re the best! I just found out my job’s down the street and I’ve gotten them everyday!

The Dancing Donut is an Instagram-worthy venue to get unique donut treats. Similar to the famed Portland donut shop, the Dancing Donut is filled with interesting and funky flavors ranging from cereal flavored donuts to bacon and interesting combinations like coconut and caramel. The hours can sometimes vary depending on how fast they sell out of the donuts they make fresh every morning.

“Dancing Donut is amazing. The interior decorating is super cute too.”

Taylor’s Bakery opened in 1913 and is a fourth generation run bakery. While they, much like Long’s Bakery, specialize in classic donuts, there are also some unique flavors like caramel, red velvet and pumpkin spice. Taylor’s also specializes in persian and bismarck donuts that feature different flavors of icing and filling, from caramel and raspberry to bavarian. The inside decor can be described as a more modern bakery and the products featured are both affordable and have large portions.

The Donut Shop Bakery and Restaurant

The Donut Shop Bakery and Restaurant has a menu similar to Dunkin’ Donuts in regards to the types of donuts offered such as long johns, maple iced, double chocolate and chocolate iced. However, they also have unique flavors such as cherry cake, honeydew, honey dip and black raspberry. Besides donuts, the Donut Shop Bakery and Restaurant is also known for their classic American breakfast dishes. While the Donut Shop is very affordable, it is not as aesthetically pleasing as the rest of the establishments on this list and it is also a cash only establishment.

Whether the donuts are classic or unique or the decorum is aesthetic, these donut shops are the top five places to bring friends and family to enjoy a good donut or take some cute pictures according to both online reviews and Butler University students. Donut forget to stop by these establishments and enjoy a donut or two.