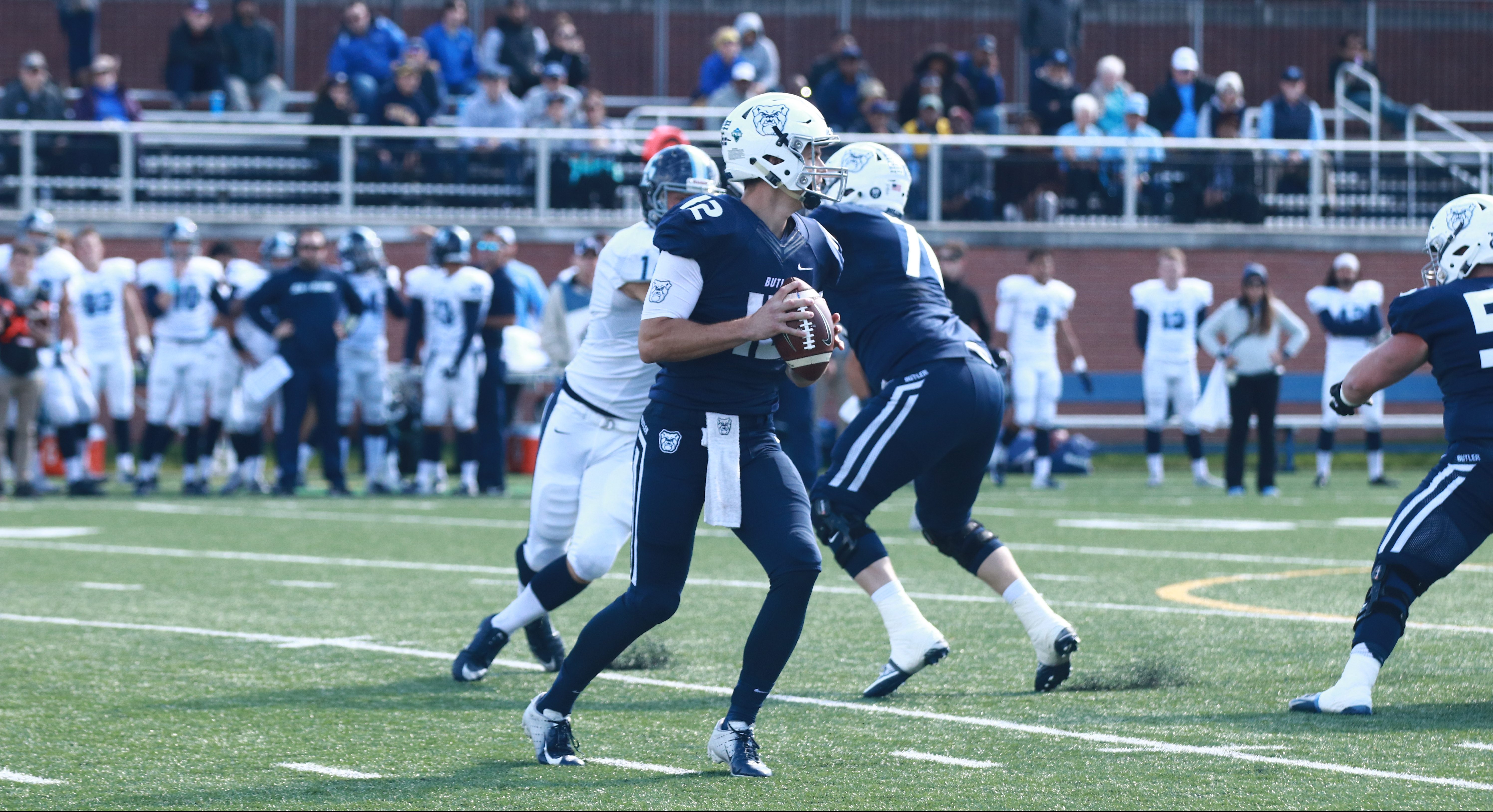 Will Marty looks downfield for a pass during a game this season. Marty threw for 267 yards in Butler’s loss to Dayton on Oct. 27. Jimmy Lafakis/Collegian file photo.

The Butler University football team lost their fourth consecutive game on Oct. 27 to the University of Dayton by a score of 38-28.

A commonality among all of the four games during the losing streak has been a slow start, and it wasn’t absent in this game.

Butler found themselves down by 21 points less than a minute into the second quarter.

As Butler has done all year, the Bulldogs fought back.

Already up 21, Dayton was at Butler’s 40-yard line. After a 10-yard run, senior cornerback Dalton Rogers stripped the ball out of the hands of the ball carrier. Junior Luke Sennett recovered, and Butler never looked back.

Even with heavy pressure from Dayton’s pass rush, senior quarterback Will Marty led the Bulldogs on an 11-play touchdown drive, ending with a 22-yard touchdown pass caught by freshman tight end Austin Schwantz.

“You get a little energy going and you can feed off each other,” Voris said. “That’s how we have to play when we’re really good. We’re taking advantage of the opportunities that the other units provide, and also just leaving the field better and just making it a little easier for the rest of your teammates.”

Butler continued to ride the momentum after halftime, driving 15-plays and 75 yards for a touchdown to cut Dayton’s lead to eight. Junior running back Brad Sznajder took an 8-yard run in for the score.

After confusion on the part of Dayton’s returner in which he called a fair-catch at his own 3-yard line, Butler’s pass rush came up big.

A short-gain tackle by senior defensive lineman Matt Hawkins, an incompletion forced by pressure from seemingly the entire line and a sack by freshman defensive end Mickey Kane pinned them at their own 1-yard line and forced to punt.

Just as Butler stole momentum from the forced fumble earlier, Dayton would do so here.

It wasn’t their offense or defense that did it, but their special teams.

An 80-yard punt took the Bulldogs all the way back to their own 19-yard line and clearly changed the outlook of the game.

Butler went three-and-out and after a short punt of their own to the 50-yard line, gave up a touchdown drive to once again go down two scores.

After Butler fumbled a kickoff, Dayton put themselves inside of the Bulldogs’ 30-yard line and took advantage of it, scoring five plays later to go up 35-13.

“They flipped the field on special teams and created more explosive opportunities,” Voris said. “They’re on short fields and creating big plays and we’re driving long fields and not creating them. We need special teams to be a more positive factor for us.”

Butler was able to respond with a 1-yard Marty touchdown run that was set up by a 26-yard run by Sznajder to Dayton’s 2-yard line.

Butler had seemingly forced Dayton to punt after senior defensive lineman Mark Geers and senior linebacker Carter Raleigh made a critical tackle on a short third down.

Raleigh was a major factor for the Bulldogs’ defense all day, with five tackles for a short gain or for a loss.

“He just plays at a different speed than everyone, he just loves the game and he plays with an energy that is you can’t teach,” Voris said. “He just has a passion for the game and has worked at it over his time here. He’s really worked at football and loves playing it. And it shows.”

Dayton went for the fourth down and converted it, however, and eventually kicked a field goal that would put Dayton up three scores and put Butler out of reach.

Sznajder caught a 29-yard touchdown from Marty to come back to within ten, but it was too late.

After a failed onside kick attempt, Dayton ran the remainder of the clock out.

The loss takes Butler to 3-5 overall with a 1-4 mark in conference play.

The Bulldogs will travel to Jacksonville, Fla. to take on the Dolphins next week. Jacksonville has an 0-4 record in conference.

“We’re just looking forward to an opportunity to go back to work,” Voris said. “And you have to start over. You’re 0-0, that’s the mentality you’ve got to have in this league because you know everyone’s capable of beating each other. So, we’ve got to go back to work. It’s going to be tough. It’s game on the road. It’s at their place. They’ve got really, really good football players. They get schemes that you don’t see every week and their record has nothing to do with how good, explosive and well coached they are. So, it’ll be quite a challenge.”