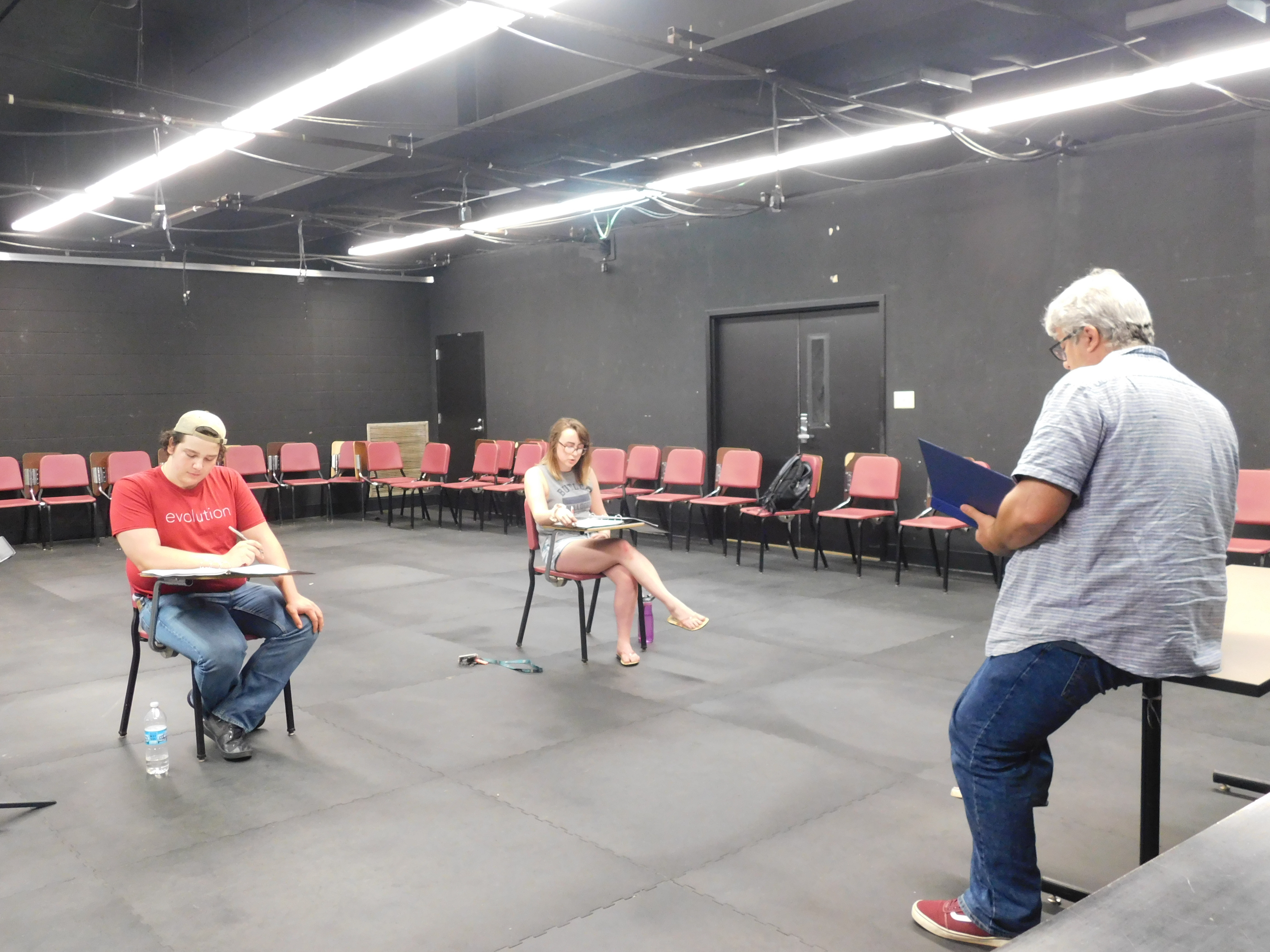 Butler Theatre students rehearse for “We Are Still Tornadoes.” Photo by Abby Glaws

The Butler Theatre Department will debut the play “We Are Still Tornadoes” by Lou Harry on August 29 and 30 in the Eidson-Duckwall Recital Hall. The play was adapted from the novel of the same name by authors Michael Kun and Susan Mullen, who are expected to attend this production.

“We Are Still Tornadoes” is set in 1982, and follows childhood friends Cath and Scott as they communicate exclusively via letters while Cath is away at university, and Scott is home tending to family responsibilities. Faced with the unprecedented challenges of separation, Cath and Scott are forced to confront their relationship as it evolves beyond friendship.

The novel received praise from both fans of young adult literature and larger media outlets, including such publications as Buzzfeed, Teen Vogue and Bustle.com.

“We Are Still Tornadoes” has undergone a unique evolution. This spring, the play draft ran through four workshop sessions with four different sets of student actors playing the main two characters, and Harry rewriting after each session to make the play work better for the stage.

Junior theatre and psychology major Taylor Steigmeyer was in the third workshop and will play the part of Cath.

“It was a really cool opportunity to work on something like this, building a play up from its beginning,” she said. “And it’s really cool to still be a part of it.”

Ever since reading a galley copy of the book, Harry has wanted to see this story on stage.

“I was attracted to it as a playwright because I love the characters, I love the situation,” Harry said. “It’s specific but also universal.”

After reading the unpublished draft of the novel, Harry contacted one of the authors and long-time friend, Michael Kun, asking how they could make it happen. It wasn’t until a year later that Harry finally got permission to begin developing the story for the stage and then went right to the chair of the Butler Theatre Department, Diane Timmerman, to suggest workshopping it with student actors.

“In most cases, students know of a script as an existing piece of material that is carved in stone, and I hope that they benefit from the experience of working on a piece where their input is really important and is listened to,” Harry said.

The reading features only two actors, Steigmeyer as Cath and junior theatre major Zane Franklin as Scott, who received word over the summer that, of the eight original student actors, they had been selected to perform in front of an audience.

“We Are Still Tornadoes” is a young adult coming-of-age story, but the characters lives are conveyed exclusively through the letters they write each other, something Franklin said was uncommon for the stage.

“It’s really different, because the whole thing is set up as these two college-age students writing letters…the idea of that as a play was super interesting because it was something I’d never seen before,” Franklin said.

For Steigmeyer, she was drawn to the charm and relatability of the premise.

Franklin went on, “I’m currently in a long-distance relationship with my girlfriend, so the idea of this whole writing letters back and forth gives me another chance to relate to the characters and be excited about this story.”

With the authors of the novel, Susan Mullen and Michael Kun, in attendance this week, there is some pressure to deliver a strong performance.

“It’s a very nerve-wracking thing!” Steigmeyer said. “This book is their baby, and I’m putting their baby out there… It’s like having their imagination come to life. I really hope they like it.”

With Harry, a longstanding figure in the community art and theatre scene, spearheading this project, the scope of “We Are Still Tornadoes” stretches further than the confines of Butler’s campus.

“Usually we have just Butler students coming to staged readings, but we have the novelists coming, we have people coming from theatre departments…and from the Indy arts scene,” Steigmeyer said. “It’s a much bigger scale than what we’re used to.”

Harry has big dreams for the future of this play, and hopes to perform it elsewhere.

“We’re talking about possibly arranging something for later in the year in New York to get it seen,” he said. “We’re inviting folks who might have an interest in the play to come out to this production at Butler. People who might be decision-makers in such things. This is not the end point for this story.”

“We Are Still Tornadoes” will be performed both nights at 7 p.m. in the Eidson-Duckwall Recital Hall. Admission is free but space is limited. This event fulfills a Butler Cultural Requirement credit.

Copies of the novel will be available for purchase at the event, and there will be a Q&A opportunity after both performances.