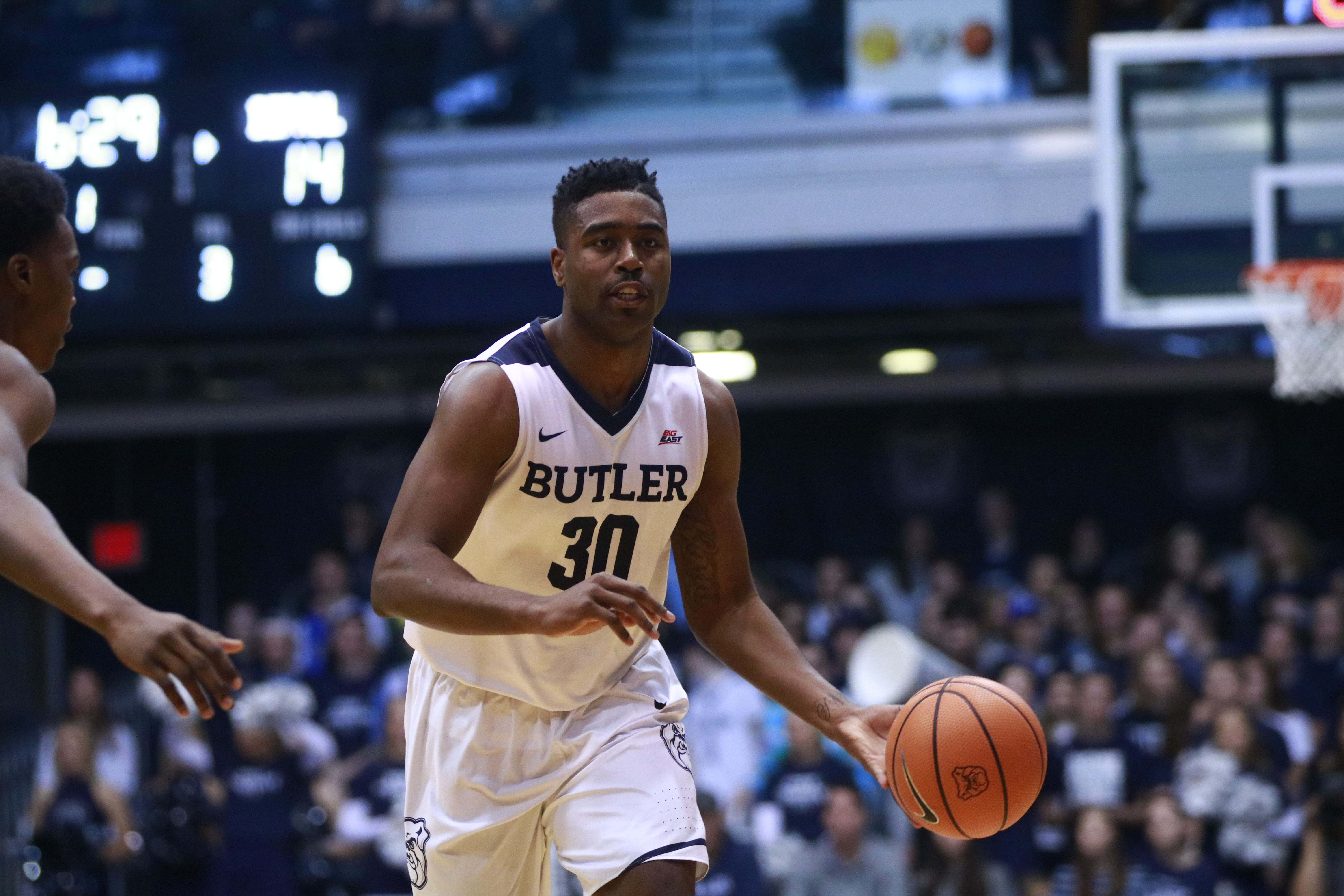 Kelan Martin looks for a hole in the defense. Martin and the Bulldogs finished 19-12 overall and 9-9 in the Big East. Jimmy Lafakis/Collegian file photo.

The regular season was wild. That’s probably the best term I can use to describe it. I know it’s not the end to the regular season the Butler faithful wanted. I’m not so concerned. 9-9 in the Big East started as criteria to make the NCAA tournament, and now the reality is making some Bulldog fans sweat. But I have to admit…  wow, that season was crazy. Don’t forget that Butler has one unanimous Big East First Team selection and a Sportsmanship Award winner. Those accolades personify the Butler Way.

Every Butler fan should walk away from this season with a smile on their face. This was supposed to be a “lost” season for the Bulldogs after moving on from Chris Holtmann, but first year head coach LaVall Jordan has done an excellent job with this team. With signature wins versus Villanova, Ohio State, and Utah I would give Coach Val an A+ grade this season. A 9-9 record in his first season in the Big East is a tremendous success, and it does not have to stop there.

While it’s fair to be disappointed in the team’s play down the stretch, I have still seen tremendous growth in this team throughout the course of the season, and a 9-9 record in the Big East is not as bad as it may seem at first glance. Kelan Martin stepped his game up to an entirely new level in his senior year, and despite a few rough losses, there were still plenty of positive signs for the team under LaVall Jordan, who eased some anxieties with a smooth transition.

The regular season featured a roller coaster of different performances but a 9-9 record is a solid conference performance. Butler was an overtime away from a Xavier win and they gave up two more games inside Hinkle they probably shouldn’t have. A 9-9 record could have easily been 11-7. I knew Kelan Martin was good, but what he did this season was incredible, he was a different animal during his senior year.

The Bulldogs have had plenty of ups and downs this season but overall, they’ve made a lot of progress. Many people, including myself, doubted Butler this season because of a new coach coming into the program at the last minute. However, Coach Lavall Jordan made the best out of the circumstances he walked into and led the Dawgs to a successful season.

Butler’s regular season should be considered a failure only because of its potential.  In a vacuum, the Bulldogs had a quality season, going 9-9 in a tough conference, and playing several difficult opponents close. The great successes of the season, of which there were many, however, make the failures that much more disappointing. Sure, we could celebrate a probable  low-seeded tournament berth, but we should demand more out of a team that is capable of it.

This regular season was underwhelming. I don’t care about preseason predictions. As far as I know, all of that garbage gets thrown out the window after you set a standard. The Bulldogs proved time and time again that they can hang with anyone, but they could never put it all together consistently. It’s hard to watch them dominate Villanova and take Xavier to overtime, in what was an absolute thriller, but then fall flat on their faces against teams they should easily beat. They seemed to play to their opponent which makes them subject to getting upset early on in both tournaments.

The season had plenty of ups and downs but can only be declared a success in the end. LaVall Jordan proved he was the guy to lead this program moving forward and they got to the magical 9-9 mark in the Big East. Kelan Martin absolutely blew me away in his senior season. The improvements he made from last year to this year were nothing short of remarkable.

Remember at the beginning of the season when fans were looking at the nonconference and Big East schedule and wincing? Or was that just me? With exception to the most recent string of games, Butler looks like a completely different team now than they did in November. Kelan Martin is a huge reason why this team is .500 in Big East play, but give credit to LaVall Jordan and then to the players for placing their trust in a new head coach.