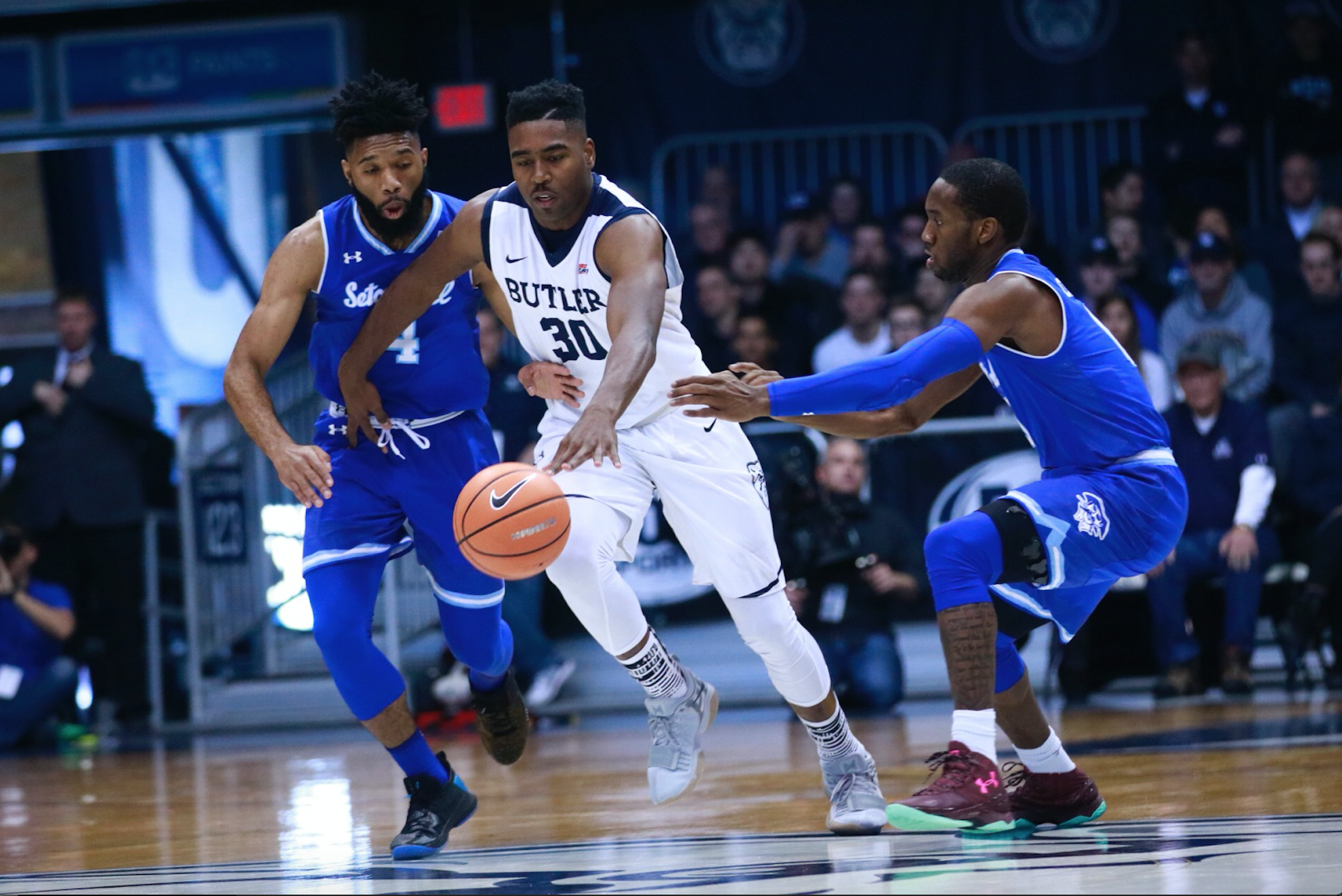 The Butler men’s basketball team lost its third consecutive Big East contest, falling to Creighton on the road. Yet another slow start forced the Bulldogs to play from behind the entire game. Butler never led at any point, but made things interesting in the second half. Here are three takeaways.

1. Butler played at Creighton’s tempo in the first half and couldn’t recover.

It is nearly impossible, especially for a team with limited offensive weapons like Butler, to win at Creighton without dictating the game’s pace. The Bluejays are third in the country in scoring at just over 90 points per game. In the first half, Creighton was in total control.. The combination of seven turnovers, rushed shots and poor transition defense from the Bulldogs allowed the Bluejays to play fast and relaxed, as their one turnover and 49 points before halftime demonstrate. Everything in the first half was in Creighton’s favor.

When Butler slowed the game down in the second half, they were able to get back into it and actually won the second half by six points. All five players were getting back to stop Creighton from getting quick points in transition. The Bulldogs took better shots and took their time on the offensive end. The poor first half was too much to overcome, but there is a chance for Butler to learn from their mistakes when Creighton comes to Hinkle Fieldhouse on Feb. 20.

2. Don’t worry about Kelan Martin. He will be fine.

After six straight games with at least 20 points, Martin was bound to have a bad performance eventually. In addition to the possibility of a rough shooting night, the senior also had to deal with Khyri Thomas for most of the game. Thomas is arguably the best perimeter defender in all of college basketball and will probably be a first round pick in the 2018 NBA Draft. He made Martin’s life miserable and doesn’t get near enough credit for his defensive excellence.

At first glance, the 10 points on 42 percent shooting and six turnovers paint a pretty ugly picture. However, context is important. Martin made some adjustments in the second half, where he scored eight of his 10 points and connected on four of seven field goal attempts. There is absolutely no need to be concerned about Martin. He’s been consistent all season and took his game to another level when conference play started. It was one bad outing. Martin’s not the first player and certainly won’t be the last to have this happen against Thomas.

Some perspective is important here. Butler’s first five Big East games included three on the road and four straight ranked opponents. The Bulldogs finished the stretch 2-3 and got a signature win against No. 1 Villanova. It could have been better, but it certainly could’ve been much worse. Butler proved it could play with the top teams in the Big East. The next step is turning some of those close losses into wins.

Now that the Bulldogs have survived the brutal start to league play, it’s time to get some wins, especially at home. The three consecutive losses pretty much wiped away the breathing room Butler got by starting 2-0 in the Big East. A home loss to Marquette on Jan. 12 would really put the Bulldogs’ chance for an at-large NCAA tournament bid in question. The good news is that Butler’s next six games are all very winnable, the toughest tests being road games against Marquette and Providence. Realistically, the Bulldogs probably need at least a 4-2 mark in those games. It can absolutely be done, but it won’t be a walk in the park.