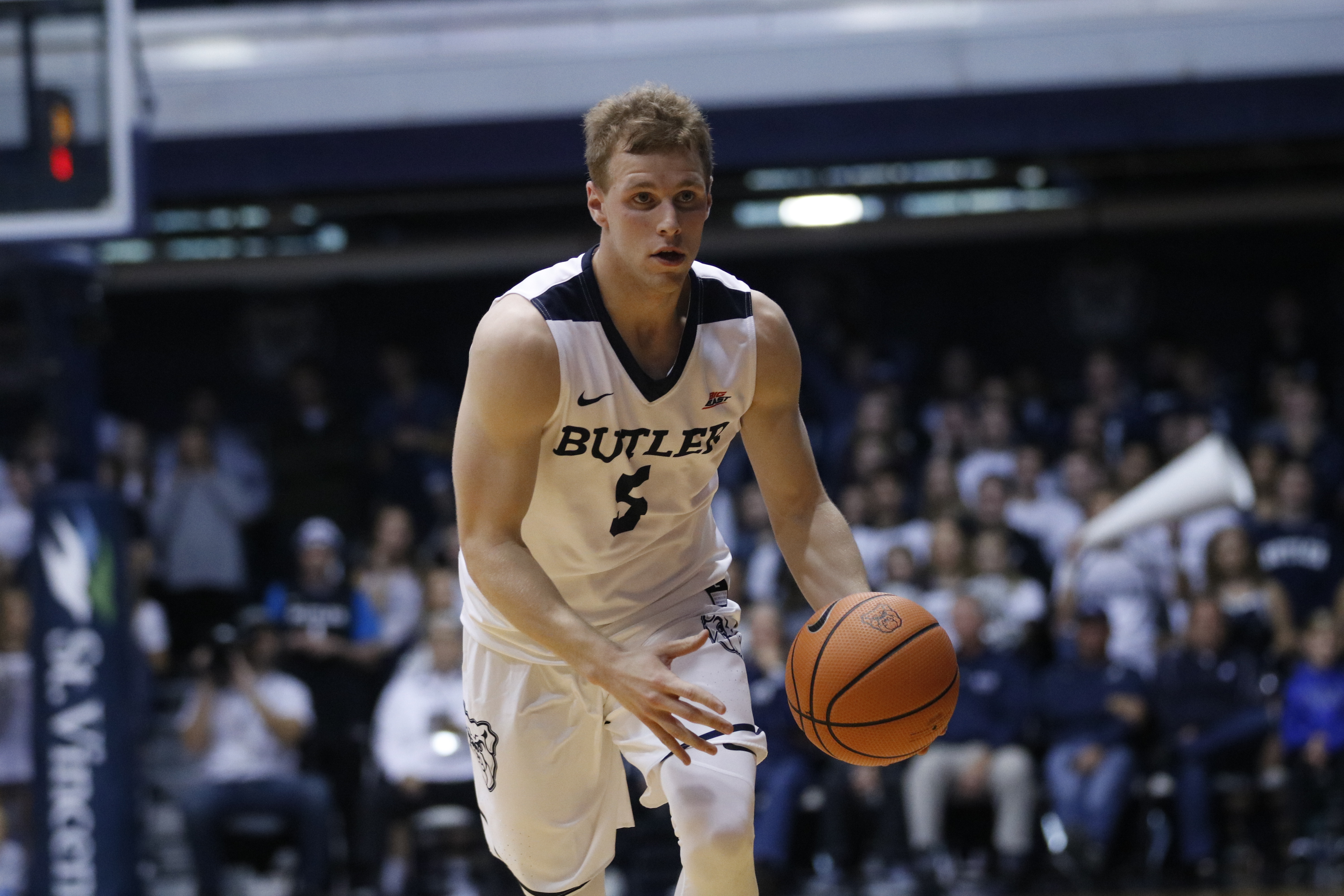 Paul Jorgensen looks to pass the ball in an exhibition game. The redshirt junior will make his Butler debut against Kennesaw State on Nov. 10. Collegian file photo.

For most Butler University students, their first visit to the school’s basketball cathedral came during a prospective student visit. Or maybe they attended a game as a kid because their aunt or uncle was an alumn.

For redshirt junior guard Paul Jorgensen, he snuck into Hinkle Fieldhouse while playing at an AAU tournament in the Indianapolis area in high school.

“We were looking around like, ‘Man this is crazy how big this place is,’” he said. “That was pretty cool. And I’m here now.”

Now, Jorgensen gets to put on a Butler uniform and prepare for his first game as a Bulldog on Nov. 10. It will be his first collegiate game since March 31, 2016.

It’s still a bit of a surprise for Jorgensen to be at Butler, in his own words. He’s the first Butler basketball player from New York since Dean Edwards played in the 1991-92 season, when the Bulldogs were still in the Midwestern Collegiate Conference. Barry Collier was the coach. Current head coach LaVall Jordan was 12 years old.

Jorgensen said he never really thought about what college he would go to or what level he would play at. All he knew was he just wanted to play basketball.

Being from the Big Apple and playing in the asphalt-paved courts in Harlem, it’s no surprise that Jorgensen was a fan of the old Big East. He can still picture the big games at Madison Square Garden. When Syracuse University beat University of Connecticut in six overtimes in 2009. When Kemba Walker hit the shot that gave UConn a stunning last-second win over University of Pittsburgh in 2011. He even went to the final ‘old’ Big East championship game in 2013, when eventual national champions University of Louisville beat Syracuse.

Now, Jorgensen gets to play in the new Big East.

After averaging 17.8 points per game his senior year at Don Bosco Prep in New Jersey, he was not on any old or new Big East school’s radar. After a few offers from eight different mid-major programs, he signed a letter of intent to play at George Washington University.

He came off the bench throughout his freshman season with the Colonials, playing in all of the team’s games. While nothing noteworthy happened statistically, he made a connection that paid off for him: he was a teammate to future Butler transfer Kethan Savage. Savage left George Washington after Jorgensen’s freshman year.

Jorgensen’s sophomore season was much like that of his freshman season, playing most of the year off of the bench. He played his role off the bench and entered each game, and the Colonials won the NIT championship in Madison Square Garden.

Yet he was missing something. He just needed a change. He wanted to transfer.

Remember that connection with Savage? Well, that would pay off. Former men’s basketball analyst and current assistant coach Emerson Kampen said the staff noticed Jorgensen’s transfer and talked to Savage.

“The first conversation we had was with Kethan,” Kampen said. “‘Would he fit here? As a player and a person?’ And what he thought of him as a teammate and all that stuff.”

Savage thought he would be a great fit to the program, so Butler gave him an offer. They were the only Big East school that did. His other offers were from Northeastern University and Hofstra University — two mid-major schools.

But he knew right away. He belonged at Butler.

Part of his sense of belonging was the program. Jorgensen said he remembers seeing Butler’s name in the back-to-back Final Fours. He, like most of the nation, found out about Butler that way.

Another sense was family. A few months before Jorgensen decided to transfer, his mother transferred jobs. Anne Jorgensen moved by herself from New York City to Indianapolis, where she took a job in neonatal advanced practice at the Riley Hospital for Children. She was alone.

“I knew it was tough on her,” Jorgensen said. “Here by herself for those couple months and away from her friends and family in New York. But since I came out here it’s been huge for her. I don’t think I could have done it without her either.”

Now the Jorgensen family is a Hoosier family. His dad Eric, who played baseball and football at The Citadel, works for Hy-Flex Corporation in Knightstown. Jorgensen said his family has been with him and his basketball career since day one.

“They grew up doing everything for me,” he said. “They took me all over the place. From inter-city to Jersey to Florida. Like wherever to play. So, just to see them here, the people that got you here, it means a lot.”

After playing in a couple tournaments in New York, Jorgensen began to pick up some nicknames. They called him “White Jesus” and “Prince Harry of Harlem.” He wanted to keep those nicknames in the past, but a few of his teammates still call him “White Jesus.”

Jorgensen brings with him east coast-style basketball experience, something that no teammate has. That style of basketball growing up was vastly different than basketball here, he said. There were small courts, crowded and full of basketball players of all different ages and sizes.

Now, Jorgensen gets to bring it this season, after sitting out the mandatory one year for transfers. Although all he could do was practice and play on the scout team, he enjoyed having last year off.

“Last year was cool to give my mind a break for a year,” he said. “We had such a good team last year that I thought it was a good time for me to sit.”

While Jorgensen played during the practice, he was a positive influence for the other newcomers to the Butler program.

Sophomore guard Henry Baddley said he was always encouraging teammates on the bench.

“He knows the process of college basketball,” he said. “And he knows it’s a long season. So, he was basically telling me ‘Just stay up. Encourage one another. Be that great teammate on the bench. Just always have confidence in yourself.’”

Jorgensen has been working on his shooting the past year. The key with any new transfer is working on skill development and refining their strengths for the upcoming season.

“He took that very seriously,” Kampen said. “I think you’ll see over this year that he’s gotten a lot better. And that’s exciting that I think he’s just scratching the surface.”

Jorgensen takes with him bits and pieces of his past. He still has the New York accent. He’s a strategic communication major with a political science minor. The minor comes from his interest in politics, something that he loved to follow while in Washington, D.C. at George Washington.

He also carries his past on the basketball court. Toughness is one of his strong suits on the court. He’s not afraid to dive across the floor for the ball and toss it toward a teammate. He strives to make the hustle plays.

“Whatever options there are to score, just do that,” Jorgensen said. “Whether that’s shooting a three or driving to the rim. Playing hard defense. Trying to help us win is the important thing, just getting the win. That’s what it’s really about.”

Jorgensen said he wants to help the Bulldogs win a Big East championship. In order to do that, he needs to first get comfortable on the court.

“He’s just putting on the uniform for the first time,” Kampen said. “So, he’s adjusting with how he’s going to fit in. I got a lot of high hopes for him that he’s going to have a great junior year. I think he’s just going to get better as the season goes.”