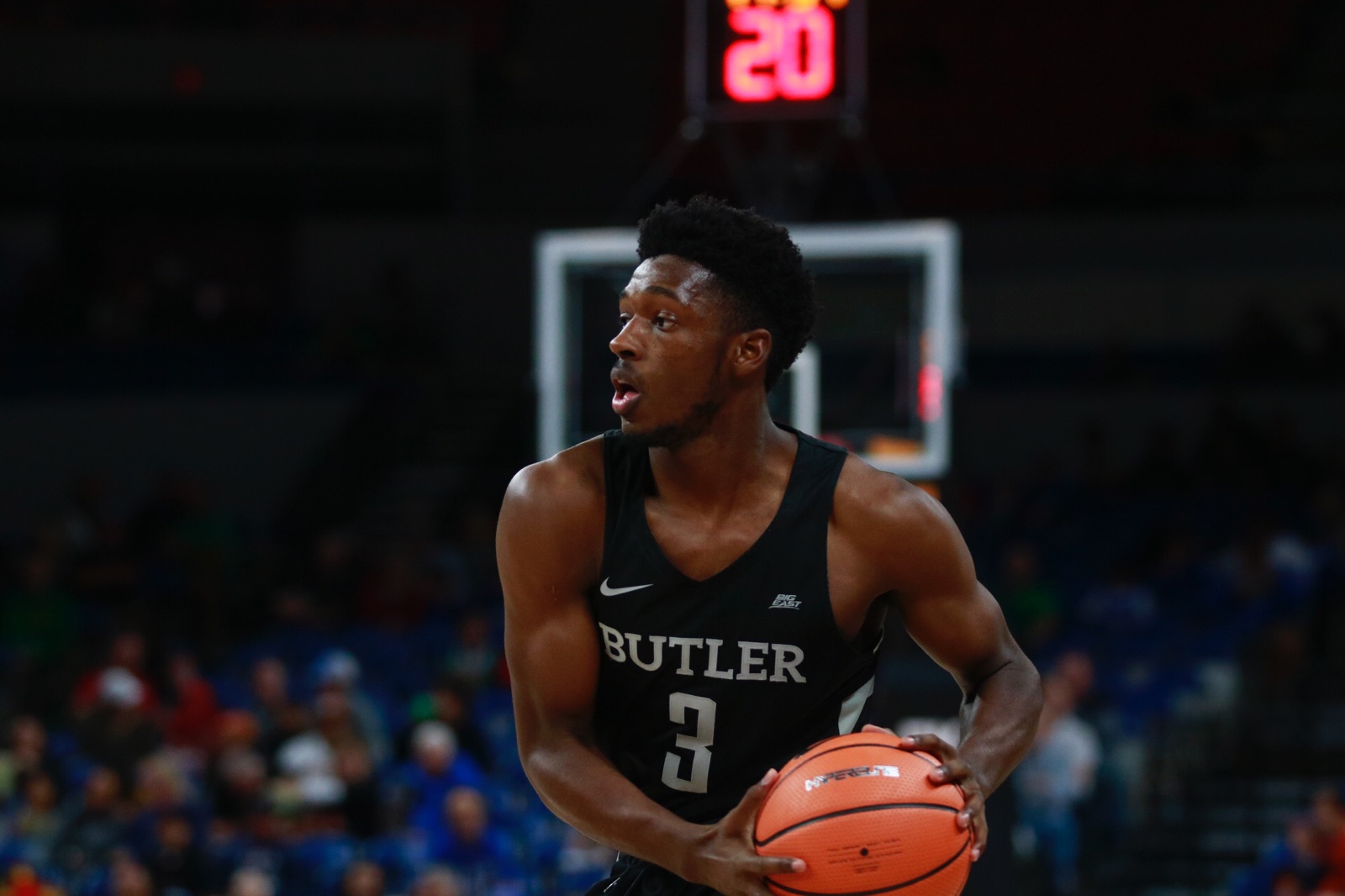 Kamar Baldwin looks to pass the ball against Texas. Baldwin led the Bulldogs with 15 points. Photo courtesy of Jimmy Lafakis.

Butler’s men’s basketball team had a rough start to the PK80 tournament, falling to Texas and only scoring 48 points in the process. The concerns about this team heading into PK80 were magnified with the step up in competition. Here are three takeaways.

1. Butler’s defense kept them in the game when the offense struggled mightily.

Pretty much every concern about the Bulldogs’ offense so far this season came to fruition in the first half. They didn’t move the ball well once again, leading to 19 points on 24 percent shooting from the field. Until Kamar Baldwin’s bucket with 4:35 remaining in the half, Sean McDermott was the only Bulldog to score. When Butler doesn’t play offense together and a few shots don’t fall, the first half of this game is the result.

Things could’ve gotten out of hand before halftime if Butler’s defense didn’t step up the way it did. The Bulldogs forced nine turnovers and held the Longhorns to under 30 percent shooting in the first half. Texas’ offense was every bit as bad as Butler’s through 20 minutes, but give the Bulldogs credit for being fundamentally sound defensively and forcing the Longhorns to make plays on offense. The Longhorns did what was necessary down the stretch to close the game out, but the final score could’ve been much worse.

2. This wasn’t just a bad shooting performance that can be written off.

Sure, there were a handful of easy shots Butler missed in this game. However, there is a much bigger problem going on here. The Bulldogs didn’t just miss a bunch of wide-open jumpers. They took shots after one pass regularly and simply didn’t pass the ball enough. For a second consecutive game, Kelan Martin did not make a field goal in the first half and almost all of his shots were not within the offense. Butler needs Martin to score; it’s that simple.

The entire Butler team only registered seven assists, pointing to the lack of ball movement and creativity. This team is not good enough offensively to consistently create quality scoring chances through isolation. If the Bulldogs are going to get through their tough non-conference schedule and Big East play with a shot at the NCAA tournament, they have to do a much better job creating for each other.

3. It’s not time to panic yet, but things need to change soon.

With a new coach and a very challenging schedule, Butler was going to lose some games this season. That schedule is also going to give the Bulldogs some extra breathing room when it comes time to evaluate their resume for the NCAA tournament. A few early losses aren’t a big deal. However, this can’t spiral out of control. Coach Jordan needs to get the team to forget about this game and finish the PK80 tournament strong.

On the bright side, it’s not like Butler lacks the talent to be competitive in games against elite competition. The problems that have plagued them pretty much all season are fixable. We’re going to find out a great deal about this team in the way that they respond to the Texas game. They can embrace it as a learning experience and come away better, or let one bad performance turn into a string of them. There are plenty of games left. It’s time to get back to playing Butler basketball.