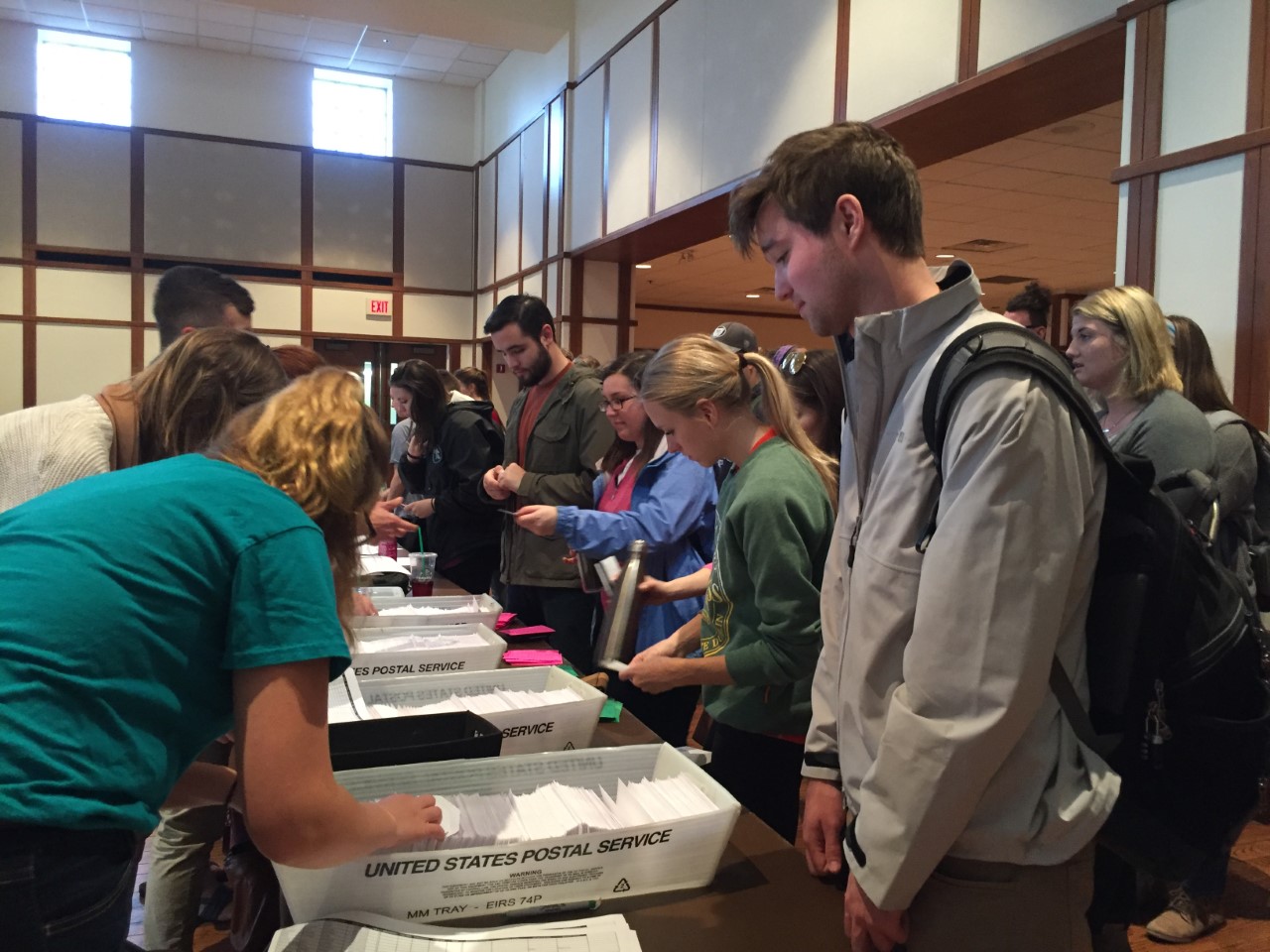 This spring commencement, each student is guaranteed six graduation tickets to distribute among family and friends. Some students, though, will have to request additional tickets through a waitlist.

Senior political science major Autumn Tyler is on that waitlist. In addition to her parents, Tyler has five brothers and sisters, and is worried her extended family will not be able to attend the ceremony.

Tyler is a first generation college student and the first of her family to go to graduate school. She said her family is proud of this first step in her education, and she wishes her whole family will be there as she receives her diploma.

Senior sports media Brendan King said he knows the limited number of tickets is an issue for some students, but it is not for him. With a small-sized family, he might not use his sixth ticket depending on extended family members and instead, give it to somebody in need.

Tyler said she has done the math, and Hinkle Fieldhouse is twice as big as the tickets allotted.

“It seems easy that if you look at a number from a sold-out basketball game that we should be able to give out eight tickets per student, but it really doesn’t work out that way,” Haggerty said, who is also the coordinator of commencement.

In addition to the number of graduates, Haggerty said there is a lot more people needed to make the ceremony run smoothly.

Hinkle’s capacity for the commencement ceremony is 8,500 seats total. Minus the aforementioned people, there are 7,000 seats left for graduates’ guests.

“It’s really just a numbers game,” director of university events Beth Alexander said. “There are only so many seats. It’s just the simple math of how many seats are available, how many students are potentially graduating. You do that math and come up with six tickets per student.”

At commencement, both sides of the Dawg Pound area are reserved for the platform party and musical performers. The graduates sit on the floor. Other areas of seating are blocked off for photographers.

“We have to then remove those sections and take out those seat numbers just to accommodate all those special things,” Haggerty said.

In an email, Haggerty said six tickets was allocated for last year’s commencement also. In the past six years that she has coordinated commencement, ticket allocations have ranged from five to nine tickets.

Ryan Krueger, senior class vice president, said there was “a bit of panic” when the email stated seniors will only be allowed six tickets, which is the number allotted per graduate in the past. Seniors posted on the Facebook group, asking if others had extra tickets.

“I tried calming some nerves, and I was telling a few people that there will probably be some later on after everybody gets their initial batch,” Krueger said. “I would say there was some panic and some stress a little bit in making sure all their family members are able to attend, which is to be expected.”

Krueger himself has a larger family and hopes to receive more tickets.

“I understand completely and am sympathetic to all the panic, but I think that in past years, once they do release all the extra tickets, typically all the people that have those family members and have that larger immediate family are able to get seats,” Krueger said.

Haggerty said for the six years she has been in this position, she has always been able to accommodate extra requests.

“I believe based off of preliminary audits that we will be able to do it again, but I just have to take a deeper look at all the numbers,” Haggerty said. “There were 134 requests that had come in for waitlist tickets, and it ranged anything from one ticket up to 10 per person.”

Seniors will know early April whether the waitlist tickets will be given or not.

Haggerty said the waitlist tickets will only be released if she can accommodate everybody on the list.

After students registered for graduation, they were sent a form for ticket requests that was due March 3, which includes special accommodations such as a wheelchair. Those six pre-ordered tickets could be picked up at Grad Finale on March 30. Students could also pick up caps and gowns at Grad Finale, as well as request to be on the waitlist for extra tickets.

Haggerty said there were still seniors filling out the initial ticket request at Grad Finale, which made it difficult to tell others if they could grant additional tickets or not.

“If you fill out the form to register for graduation, and you didn’t fill out your ticket form, I wouldn’t want to give out your tickets to somebody else on the waitlist because you were owed the six tickets that you should have gotten,” Haggerty said. “So we have to make sure we accommodate all those requests first and then make the waitlist evaluation.”

Alexander said if students still have not put in requests, they can still do that by contacting the student affairs office or going on the commencement website.

If there are not enough seats and the waitlist cannot be accommodated, there will be a livestream of the ceremony with a possible viewing on campus.

“That would be a great substitute,” Krueger said. “It’s not the same, granted, but definitely for the more extended family that wants to be part of the ceremony, they can all join with each other and still be there. Especially in comparative to being in the highest seat in Hinkle Fieldhouse, it might actually have a better view.”

If the ceremony moved to a bigger venue than Hinkle, the university would have to consider the cost and the loss of tradition and culture.

“I hope we can stay in Hinkle for many, many years to come because it’s interesting, that yes, it’s primary purpose is of course, our basketball venue, but it makes really a lovely ceremony too with all the sun that comes in the windows,” Alexander said. “It’s really a great place to have commencement.”

With each growing class size, it is possible the number of tickets will be reduced even further, but Haggerty said it is a “fluid number” due to graduate programs and students graduating early.

Haggerty said currently, there are only about 100 graduates in the winter commencement ceremony because a lot of students wish to walk with their classmates in the spring even though their degree is finished early.

Krueger said he does not know how the university could improve the ceremony without moving or restricting faculty, who “probably have contributed to the success of a lot of students walking across the stage.”

“It’s difficult to not know all the planning that go behind the scenes until you’re able to see that,” Krueger said.

Seniors wait in anticipation for whether they will be granted additional tickets or not.

“I hope everybody has the chance to get their ticket orders in, and if they don’t, never panic,” Alexander said. “We will fix it, we’ll figure it out. I look forward to it and it’ll be here before we know it.”

Commencement will be May 6, and students will hear about waitlist tickets in mid-April.