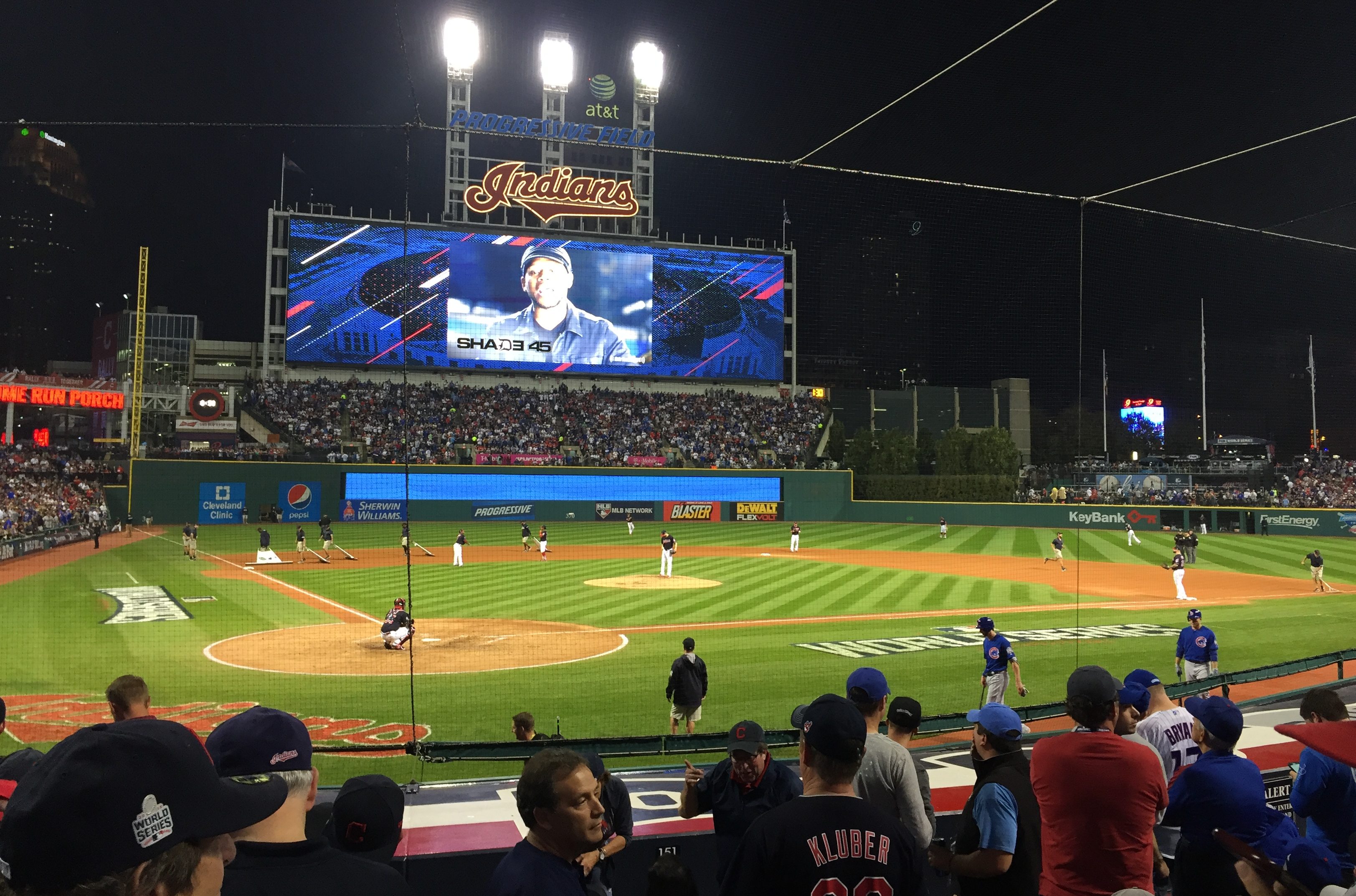 I look over to my right, my sister in shotgun; her Cubs hat, still damp from the rain, slumped over her eyes.

Not a chance. The morning is early and the road is dark, and I’m caught in the fading strength of streetlights casting a yellow haze over the city of Cleveland, the dim glow of Progressive Field folding behind the skyline.

Kenny Chesney croons through the radio, soft country undertones filling the spaces between running thoughts. I have lots of them, nestled between disbelief and an undertaking of profound awe of the last 24 hours.

I exit off the highway, and Jessica’s head rests to the side, hat shifting. Her neck mirrors the curvature of the road wrapping around Interstate 71, arcing…

And then it becomes 2003, and a baseball is tossed into the sky before it lands square in my glove. I’m a 6-year-old kid playing in the backyard, throwing my hat off because, “By God, the Chicago Cubs did it! The Chicago Cubs win the World Series!”

And I race down the lawn like it’s the outfield grass of Wrigley Field and launch myself into the pile of leaves my dad is raking.

I’m 6-years-old, and for the next 13 Octobers that’s all I can dream about. Street noise gives way to the sounds of Wrigley, and in the confines of my backyard, the Cubs win the World Series every year.

Until the year they actually do.

In Game 7 of the 2016 World Series, the ball finally stops spinning. First baseman Anthony Rizzo catches Bryant’s throw for the final out.

“The Cubs win the World Series! Bryant makes the play! It’s over! And the Cubs have finally won it all!”

I am caught in the dream of generations. Swept and enthralled by the weeping and laughing, sounds carried high into the night like the fists knocking into the air; by rolling emotions in the last great American sports story.

If epic is a word that overuse has worn thin, the Cubs have brought meaning back to its roots in an epic poem of heroism elevated to its greatest proportions.

It is World Series MVP Ben Zobrist, whose path to the majors is only slightly more bizarre than the name of his hometown, Eureka, Ill. Who fought off a 1-2 count to score baserunner Albert Almora with a double down the left field line.

It is Carl Edwards Jr., the 48th round draft pick brought into the 10th inning to protect an 8-6 lead. His full last name dips below the shoulders of his jersey, the 6-foot, 3-inch, 155-pound reliever is so thin, and you’ll do well to remember baseball eliminated the 48th round in 2011.

In a game traditionally consisting of winners and losers, baseball is also life’s greatest equalizer.

Jackie Robinson was still two years away from breaking the color barrier when the Cubs last played for a title in 1945.

Seventy-one years later, Cubs centerfielder and African-American Dexter Fowler made baseball history by becoming the first man to lead off a Game 7 World Series with a homer.

I’m grasping my sister somewhere in the middle, because she always neutralized the doom and gloom of my Cubs pessimism with a roll of her eyes and optimism.

I’m reaching for my dad, because being a Cubs fan is something I inherited, the way I inherited his DNA and have his eyes and smile, the same one we’re sharing now.

My world spins in a stitched series of fragmented time.

It’s 2005, and Mrs. Corona is pulling me out of the second grade classroom, my hand clutching a set of math problems scratched over with the relentless frustration my pencil wields.

We fall into a post-game schedule after class. She asks for the scores. I give her the numbers between addition and minus signs. Most of the time, I’m reporting losing numbers. The Cubs go under .500 that year.

I don’t think my parents ever worried about my first heartbreak. It was never going to be a highschool boy. I had seasonal breakups. My heart was on loan for 162 games. They could take it, if that’s what they needed to break the curse. One heart of a 10-year-old girl in exchange for winning it all. I thought it was a good heart too. Sometimes I lied. But the biggest lie was always “next year.”

Next year became this year, and my feet are rooted in an aisle of Progressive Field in the top of the 10th. Score tied at 6. I’m bargaining, making promises to the baseball gods. I’m the worst type of fan — too reasonable to believe the rain was sent by baseball entities, but too far gone to care.

Remnants of the rain delay seep through my Converse. I feel the cold spread across my toes, as if the weight of 108 years could sink into cheap Costco socks. And that’s where I stand until the last out.

Gloves, hats, are thrown into the air, arcing…

My feet rock off the concrete, it’s 95 degrees in Wrigley and I’m hoisted in my dad’s arms, just barely light enough to still be carried. And even though he says I am getting too heavy, I know he won’t put me down just yet.

His legs carry the two of us up the stairs. I catch the expanse of green outfield in the reflection of his sunglasses before twisting around to see the field open around me. I am lost in its vastness of space and found by a richness I’ve never quite encountered before.

My dad sets me down at the top of the stairs…

And when my foot presses against the pedal of the car, my socks are still wet. The morning is early and I have a five hour drive back home.

In the grand scheme of things, the wait isn’t that long.