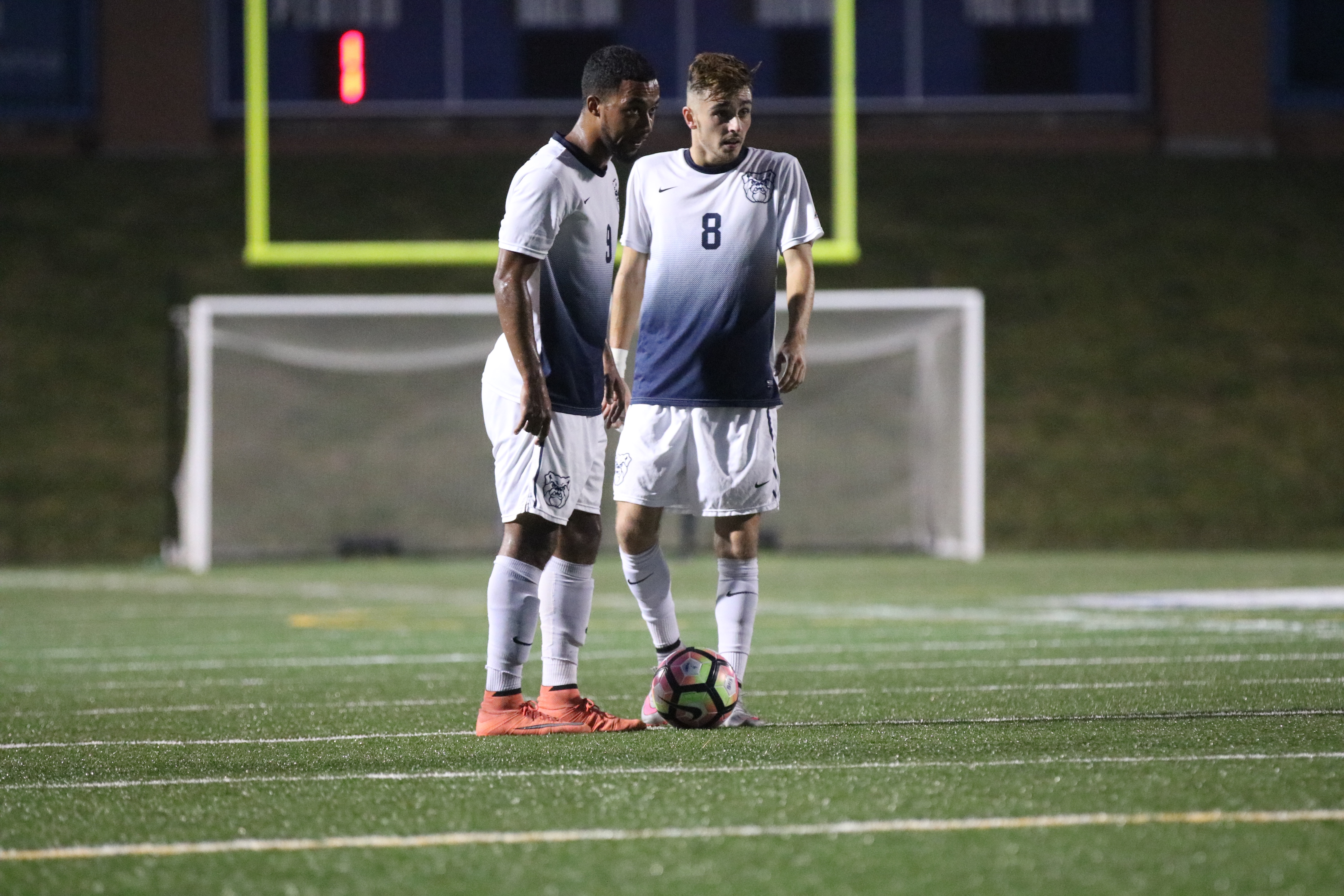 (From left), Isaac Galliford and Lewis Suddick work together during a men’s soccer game. Photo by Jimmy Lafakis.

Prior to this season, Lewis Suddick and Isaac Galliford were unknown to America, let alone to Butler University, but now, they light up the box score each match for the Butler men’s soccer team.

Suddick and Galliford are both from England. As teammates and roommates, they have been adjusting to life in a new country together.

“Lewis and Isaac give you quality,” Snape said. “Isaac’s more of an explosive dribbler. Lewis is a great passer and [great at] scoring goals as well.”

Galliford is a 5’10” midfielder from Luton, England. He played for Luton Town F.C. and attended Lealands High School. Galliford said Snape as a mentor for him at Butler.

“With his knowledge of the game, he can relate to the situation I was in,” Galliford said. “Coming here by myself, I knew I would need guidance, and he has been able to give me that.”

Galliford has three goals so far this season and earned the Big East Freshman of the Week award after the Louisville game on Aug. 26. Since Galliford’s beginnings at Luton Town F.C., he has learned a lot about playing midfielder.

“My knowledge and intelligence within the game has definitely improved,” Galliford said. “When I first started out, I loved to run with the ball, loved to shoot, didn’t like to pass. As I get older, I’ve learned more about the game, more about movement.”

He considers himself to be a team-oriented player. His goal for this season is to make the NCAA tournament.

“As long as we keep our heads down and stay positive, then we definitely have a good chance to make it far,” Galliford said.

Suddick played for Newcastle United FC, his hometown club. He began with them as an 8-year-old and made the 18U first team last year. Suddick said the transition has been tough, but having Galliford as a roommate helps.

“We’re always chatting about rubbish and certainly we get ourselves through some situations,” Suddick said. “We might be feeling a little homesick or we might have a lot of work, but there’s a lot of things we help each other through.”

Suddick has seven goals and 16 points, which is second on the team, behind fellow forward David Goldsmith. Suddick had a three consecutive goals against IUPUI, which has garnered the nickname “hat trick” from Butler fans.

“That happened in the past and I’d prefer to look forward to future games,” he said. “If people want to call me that, that’s nice, but I’d rather drop that name and look to the future rather than the past.”

Suddick is the grandson of former Newcastle and Blackpool star Alan Suddick, who died in 2009. Lewis said his grandfather always gave him valuable advice.

“One thing that I always stuck by was, ‘You’ve always got to be working hard because you never know who’s watching,’” Suddick said. “Throughout my short career, I’ve always tried to work as hard as I can.”

Suddick is focused on this year’s goals, just like Galliford. However, Suddick has big plans after college. He said he wants to play professionally.

“Playing with the youth team and with professionals in Newcastle, it has given me a taste of what I aspire to become,” Suddick said.  “The MLS is a big chance, but I think maybe one day I would like to have a playing career in England.”

Both Suddick and Galliford have been getting use to American life off the soccer field. Both agree that there are differences, some more fun than others.

“When we first came here, we were given peanut butter and jelly sandwiches,” Galliford said. “And I’ve never seen them before. But they’re actually really nice.”

Snape said Suddick and Galliford have made the transition to college soccer very easily, with good team spirit.

“They’re enjoyable, and joined at the hips as well,” he said. “If you’re looking for one, just look for the other person. They’re never apart from each other.”

The two starters will be back in action Friday at Creighton. The Big East Digital Network will stream it online.