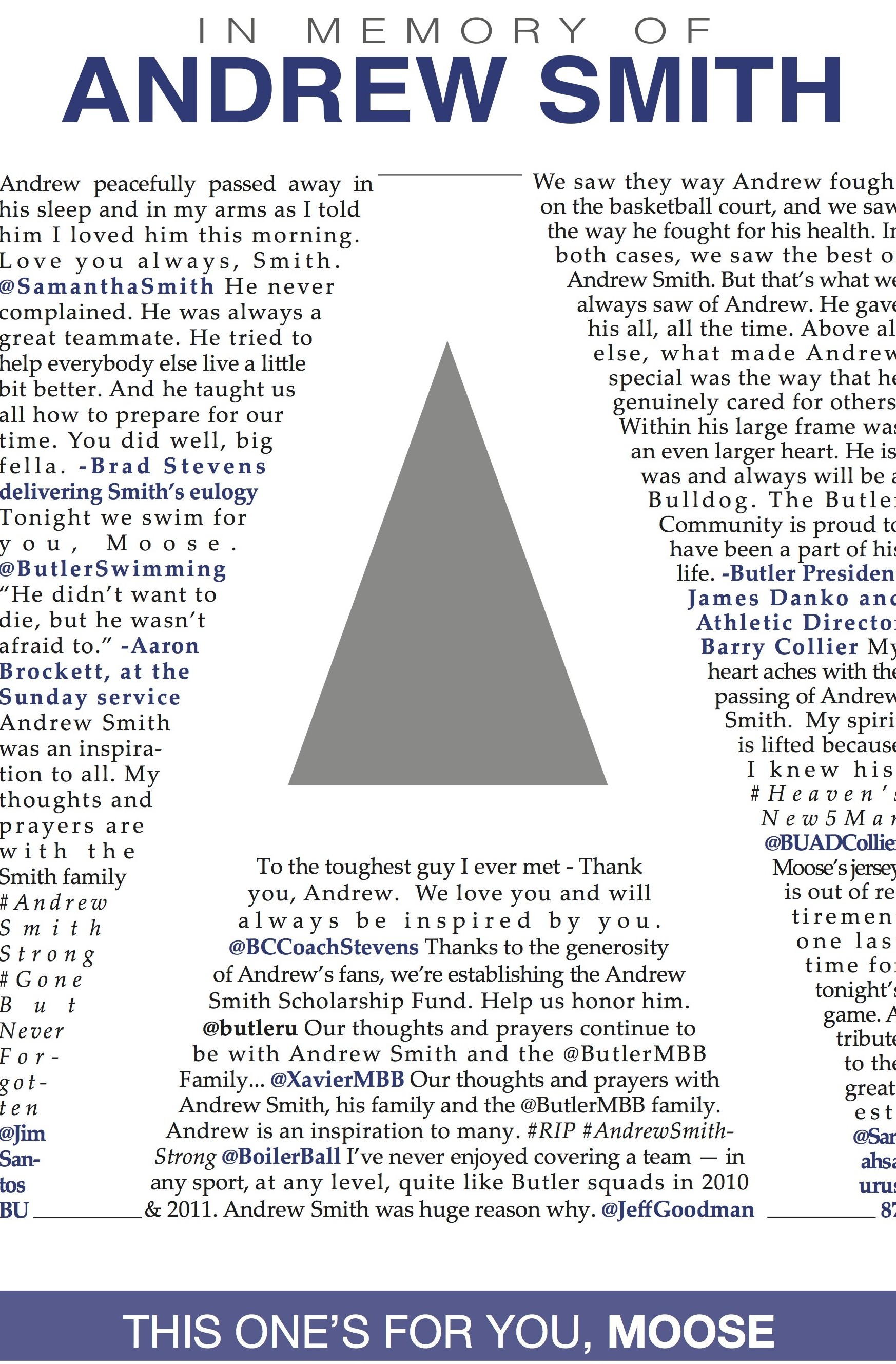 Andrew Smith was a hero on the court, to the fans in the stands and at home.  He tallied 1,147 career points. He was a hero under a national spotlight–a member of the Butler men’s basketball team during their chase for an NCAA championship in 2010 and 2011.

Heroes do not fall or falter. Breaks in stride are intentional, a fleeting stammer of feet against the boards of the court before grasping the ball and stretching tall with grace toward the basket.

We are the fans, wrapping around the sidelines and spanning to the far walls of Hinkle Fieldhouse, clinging to every breath and rhythm of the game, every high and low. Arms outstretched for every free throw and crashing toward our sides as the ball arcs down.

As fans we rise and fall in the stands, a mirror of the highs and lows of the season. Stand and gather. Our heroes are on the court.

We are the spectators. Unable to interfere should a player stagger to the floor, collapse inside the paint. That in itself contains a beautifully strange comfort.

Gifted with a sense of invincibility, athletes lift themselves off the floor and rise.

A young man woke up one morning and found himself staring into the face of cancer. Off the court, we, the fans, gather to support a hero when they fall. Blood drives, a bone marrow registry, the annual “Stay Positive Day.” Smith was diagnosed with cancer just three years after appearing in a national championship game.

There was no referee to call foul, no timeout to recover.

In games, we find ourselves fascinated by athletes’ displays on the court. The ferocity with which they play. Their confident drift down after surging to tip the ball into the net. Navigating and weaving, in and out around obstacles.

In sports, we are allowed to be moved by the grit of our heroes on the court. But perhaps more inspired by their fight off the court.

Inspiration can be found in a hospital. Smith endured intense bouts of chemotherapy, radiation and a medically-induced coma. His heart stopped beating for 20 minutes.

As fans, we seek heart.

The player who resisted crashing down though battered by blows,  Smith gave the greatest display of courage–the fight and the heart in which he fought with on and off the court. The way he moved on the floor of Hinkle, no one ever saw cancer coming.

Maybe that is what hit us the hardest.

All athletes can be blind-sighted by obstacles off the court. It is part of the human condition and it is why we love them.

But not every struggle or athlete has the power to inspire the way Smith did. There was a certain grace to how he battled cancer. The same grace with which he played on the court.

Basketball was an extension of who Smith was. There is a beauty in sports, an appeal to the human state of mind that makes it impossible to regard basketball as just a game he played.

Students donning “Stay Positive” shirts, the opposing team doing the same. It is found in the square of the AS44 patch on Butler jerseys. A gold 44 pinned to the lapel of a coach’s suit.

All of it are parts of Smith’s legacy. Moments of greatness are hard to see on the court and harder to recognize in life.

His legacy unfolded before our eyes and will continue to be seen, embedded within the Butler Way.

On the court, it is spectacular to watch. The kind that draws crowds to Hinkle and creates a nationwide following in search for a Cinderella story.

Off the court, heart is defined by the person who owns it.

As fans, we love Andrew Smith for the heart displayed in games.

As people, we love Smith for the heart he gave in 25 years of life.