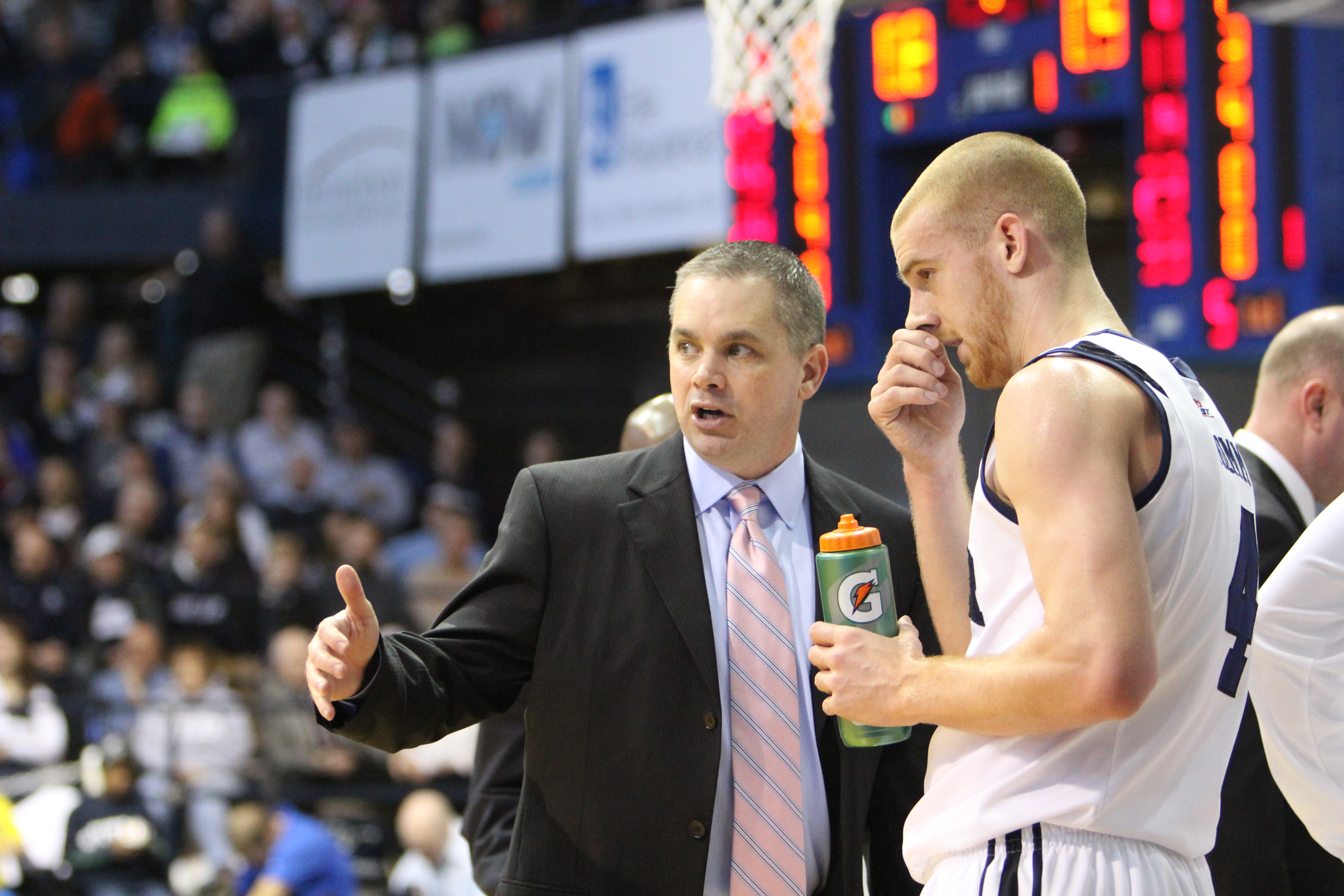 Memories of the Butler men’s basketball team making Cinderella runs to the NCAA championship games in 2010 and 2011 will live forever in the minds of Bulldogs fans.

But since that time, Butler has experienced two conference changes and, now, three coaching changes.

Experts say that such rapid changes bring the stability of the program into question and that recruiting and long-term success may be affected.

Jay Bilas, ESPN college basketball analyst, said the move to the Big East coupled with a pair of head coaching changes may cause the future to seem unclear.

“A program like Butler who wasn’t playing in a big program like that before, it was certainly a step up in game-by-game competition,” Bilas said. “To not just have the coaching change from Brad to Brandon but to now have your new coach out and an interim in, it gives everyone a feeling of uncertainty.”
Butler’s first conference move came in 2012, when they moved to the Atlantic-10 Conference from the Horizon League. After a year in the A-10, the Bulldogs moved for the second time in as many years to the Big East Conference.

Dan Dakich, an ESPN college basketball analyst and former Indiana University player and coach, said consistency has always been a Butler trademark. He said with an increase in competition, consistency may no longer be the status quo.

“That’s what Butler had kind of always been, through Barry Collier, Thad Matta and Todd Lickliter,” he said. “It’s really hard for Butler to have all of this.

Players leave, but the conferences thing has made it more difficult. The Horizon is a lot different than being in the Big East where you have to be really good two or three nights a week.”

Amid the changes, Collier stands by the decision to move to the Big East.

“Butler made the decision to move to the Big East based on being comfortable for the next 50 years with that,” he said. “When an employee goes on medical leave, that doesn’t change a 50-year decision.”

When Butler made the announcement that it was leaving the Atlantic-10 Conference in March 2013, Brad Stevens was at the helm. In July 2013, Stevens departed for the NBA’s Boston Celtics. Miller was appointed to take Stevens’ place.

While Butler struggled, Bilas said it is not fair to compare Miller to his predecessor. Multiple factors plagued the Bulldogs last season, including an injury to Roosevelt Jones. Jones averaged 10 points per game during his sophomore season, and made national headlines for his buzzer-beater versus Gonzaga on national television.

Butler made it to back-to-back national title games in 2010 and 2011. Collegian file photo

“Brad Stevens is one of the great coaches in the game,” he said. “To have Brandon come in and be expected to match Brad in every respect I don’t think is not particularly fair or realistic. He was hamstrung out of the gate when Roosevelt Jones got hurt. When you take away what I would consider their best player, I think a lot of coaches aren’t going to look as good as they would otherwise. I think Brandon and his team would’ve looked a lot better if Roosevelt Jones was in the lineup the whole year.”
Regardless of who is on the sidelines, one thing is for certain: Butler will take the floor for its first exhibition game of the season on Nov. 1. The players are confident they will be able to succeed.

Junior guard Kellen Dunham will be playing for his third head coach in as many seasons. He said despite the coaching changes, all three coaches have all maintained the same values.

“Even though we’ve changed, all of them have Butler values,” he said. “That’s been great for our team and the leadership has helped with the changes. We shouldn’t use it as an excuse if we don’t do so hot.”

Butler has a history of overcoming the odds. Holtmann said the team will rely on that instinct as the season gets underway.

“Our guys are a resilient bunch, and we’re going to lean on that this year,” he said.

He said the team is chomping at the bit to start preparing for the season.

“Our guys are ready to begin working,” he said. “They’ll be ready in a couple weeks to play games, but right now they’re ready to practice.

Bilas said the amount of success the team experiences this season will be based on how the team bands together in the midst of adversity.

“Sometimes you get together and things can go really well, or if you have a few bad things happen and you lose a few games, people sometimes lose belief,” he said. “It’s happened before. It could work out just fine, and it could be a problem. It all depends on how everybody responds. The players don’t have to change their skill sets without Brandon there, but they have to change their mindsets. They have to be a lot closer.”

Dakich said the loss of Miller can be motivating or debilitating, and which way the pendulum swings depends on how the team’s leaders respond.

“It can do one of two things, based on the leadership of the team,” he said. “It can send a team reeling right from the get go, and it’s over. Or, if you have strong leadership on the team and guys that play for one another, it can be a motivating thing.”

Collier said he has seen strong leadership by the players within the first several team practices.

“The three practices I’ve been to thus far would indicate that there’s a very strong leadership within the team,” he said. “I’m pleased with how they’re approaching the season.”

Dakich said leadership is not just contained to the players on the floor.

“It’s going to take some real leadership by everybody,” Dakich said. “By Brandon, by the players, and by Barry Collier.”

Dakich said the team is talented enough to be successful, and that it is an opportunity for them to surprise some people.

The duration of Miller’s absence may have longer lasting effects on the program than just this season alone. Bilas said if the team were to struggle again this season, they may lose momentum they have recently gained.

“If he’s back relatively soon, I don’t think they lose a lot of traction,” he said. “These issues, getting used to a new conference, are going to take a little time. But in today’s game with the changes going on in college athletics, you certainly don’t want to lose all the ground that’s been gained in the four to five years leading up to this.”

One of the most prevalent areas which could be affected long term is recruiting.

Dakich said the question moving forward is whether or not they can continue to get commitments from the best talent available.

“The question moving forward is are they going to get good enough players that they are able to compete at that level two or three times a week,” he said.

“Everybody likes the Horizon League, but it’s an entirely different deal. Butler was playing from ahead in the Horizon League. Now, they’re competing against schools that have every advantage and probably more than them.”

Butler is no stranger to having high-level talent on the floor. However, Dakich said the talent it takes to compete in the Horizon League differs from that in the Big East.

“Butler’s had it in the past, obviously. (Gordon) Hayward, Shelvin Mack and Matt Howard were the three best players as any team in the country. They’ve just got to make sure they do that more consistently now.”

“Relationships are everything,” he said. “Brandon Miller in the state of Indiana has an unbelievable set of relationships. Obviously he’s extended that over the years because he’s become the head coach and reached into other areas and has a great coaching resume. Kids are recruited early by an assistant coach and the head coach. If the head coach leaves, it can obviously change promises or any commitments that were made.”

Denison said in today’s world, there are more people involved in the recruiting process than ever before. Nonetheless, the most important voice the recruit will hear is that of the head coach.

“You’ve got lots of people involved in this circle that surrounds the recruit and the school that he is going to, and the head coach is the biggest of all in the kid deciding whether or not to come,” he said. “There are two major factors in this thing. Number one the prospect, and number two who the head coach is. If either one of those changes his mind or changes his ways, obviously the commitment, the relationship and the decision can be compromised.”

Dakich said Butler will have to work to keep those players who committed under the pretense that Miller would be the head coach.

He said it will be up to Holtmann and the assistants to continue to market Butler.

“The assistants are going to have to do a good job selling and being honest about what’s going on, and you just do your job,” Dakich said. “But it’s very difficult. It’s hard to get good players when it’s stable, and much more difficult when it’s not.”

Collier said the brand of basketball Butler has established will be enough to keep players interested, regardless of who is patrolling the sidelines.

“I think that there is so much positive for student athletes to gain from being a part of our program, that while the decision remains with each one of them, that there’s an understanding that this is medical and no more, no less,” he said.
Arthur Levin was a Butler season ticket holder from 1973-2009, and said he missed only a few basketball games during the span. As he has watched changes unfold within the program, he questions whether or not the Bulldogs continue their winning ways.

“I’ve got an open mind,” he said. I certainly hope so, but let’s say I have doubts creeping in. They are based on the fact that fans are pretty flighty. They like a winning team. The question is, ‘Will Butler continue to win?’”

He also said he thinks fans deserve to know the status of the program.

“I can’t think of anything that would be so serious that you wouldn’t want to share it with the public,” he said. “After all, there are 10,000 people that come to the basketball game and pay big money. Don’t they have a right to know what is happening to the program? There are seven or eight thousand season-ticket holders who pay big bucks. Don’t those people have the right to know what direction the program is going or whether Brandon is coming back?”

Levin said he thinks the answers will come out eventually. He said when and how it comes out could have major implications.

“If it’s a serious medical problem, Butler could gain some sympathy for it, like the Colts did with Chuck Pagano. If it’s something else, it will eventually come out and embarrass the program. I would get it out in the open, put my own spin on it, and go from there.”