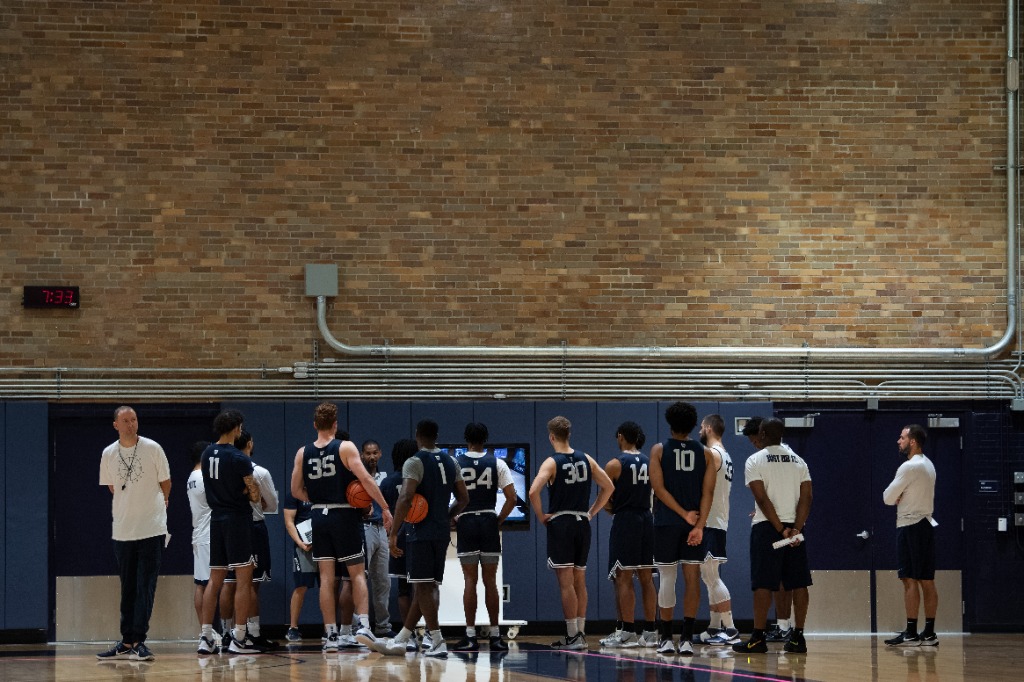 The Butler men’s basketball team during one of their summer practices on Aug.4, 2021. The men’s team adds four freshman to their roster this year. Photo courtesy of Butler Athletics.

While Thompson was limited to playing in only 14 games the 2021-22 season, in the games he did play it was clear how valuable he is to the team. Despite playing in a little over half of the team’s total games, he still led everyone on Butler in assists with 66 on the season. He is a very experienced player who has been a part of teams who have made runs in the NCAA Tournament. He is also a solid defender who commits to playing defense 100% of the time. He is Butler’s best playmaker and is also great at finishing around the rim.

Harris was Butler’s best offensive player this past season. He led the team in scoring at 12.9 points per game as a freshman, shot over 40% from three and 84% from the free throw line to lead the team. He is an excellent outside shooter who showed flashes of being a solid rim finisher and passer, while also being second on the team in steals. He also showed an ability to come up big when it mattered most when he scored 21 points in Butler’s 70-69 win over Xavier in the Big East Tournament. Harris already does a number of things well and is only going to continue getting better.

Myles Tate | 6’0” sophomore guard
Tate had a good freshman season for the Bulldogs, with averages of 6.7 points per game and 2.3 assists per game, while also being one of only two Bulldogs to play in all 25 games. He had a number of big games as well, including a 22 point game where he shot five-for-eight from three versus Seton Hall on Jan. 2. He and Chuck Harris seem to have really good chemistry together and it’s going to be very fun to watch this backcourt grow over the next few years. Though he will miss the beginning of season with an ACL tear, his impact on the team this year should not be overlooked.

Golden was a major part of what Butler did last year, and he will undoubtedly do the same this season. He started and played in 24 of the 25 possible games as the team’s starting center and overall did a good job holding his ground defensively against most bigs while also punishing smaller ones on the offensive end. He is a very strong and physical finisher at the rim, while also having a soft touch. He is a good free throw shooter in general, but especially for a big, and he also does a good job moving well at his size defensively, and uses it to consistently be in the right position.

Nze was the Bulldog’s most versatile player last year and brings a ton of different skills to this year’s team. He led Butler in rebounding last season at almost eight rebounds per game and in total blocks. He averaged 11.4 points per game while shooting 49% from the field. He is a good passer for his position and also is a versatile and switchable defender — which will allow Coach Jordan to experiment with a number of different lineups.

David was another Bulldog who unfortunately missed a ton of time due to injuries. He only played in 11 total games and didn’t play very much in the games that he did suit up for. However, he did have some nice moments including when he scored nine points on three of four shooting from three in a loss to Georgetown.

Bolden is a consistent 3-point shooter with range well beyond the college 3-point line. He led the team in 3-pointers made last season with a total of 59, including going six of nine with a total of 20 points in Butler’s loss to Indiana. In addition to his shooting prowess, Bolden is an experienced veteran who is a solid rebounder, defender and playmaker. He commands a lot of defensive attention, which can open up the floor for his teammates.

Hodges is unfortunately another example of a Bulldog who missed a ton of games, playing in only nine total on the season. Because of his inconsistent availability, his numbers from this past season don’t accurately depict what he can do. He is a very athletic finisher, with the ability to dunk well above the rim. He is also a prolific defender, solid playmaker and shooter. Once he fully heals from his left knee injury this year, his numbers will likely look much more like they did during his junior year at East Tennessee State where he was a First-team All-Southern Conference selection.

Myles Wilmoth | 6’9” sophomore forward
While Wilmoth’s base numbers of 1.7 points and 2.6 rebounds don’t stand out at all — he definitely showed flashes at times. He is the most likely recipient of the extra minutes left after Jakobe Coles’s departure. He has good size for a forward at 6-foot 9-inches and also has outstanding athleticism. He definitely has the chance to be a solid finisher and rebounder at the least if given the opportunity.

Mulloy did not play much during his sophomore year, averaging only 6.6 minutes per game. With fellow big Jakobe Coles’ departure to TCU, there is a chance that Mulloy can play a bigger role for the Bulldogs this season. He gives the team great size, and the ability to back up Golden at center.

Parker played in only three games for the Bulldogs last season, and hit one of three shots from the field for a total of three points. He has veteran experience and also has pretty good size for a forward at 6-foot 6-inches. If Parker is able to get more playing time this season, there is a chance he will be able to provide good 3-point shooting value in short spurts.

Groce had a fantastic career at Eastern Michigan University capped off by a sensational senior season where he led EMU in both scoring and rebounding at 15.2 points and 6.9 rebounds per game, while shooting 53% from the field and 72% from the free throw line. He will give the Bulldogs an experienced veteran forward who can add additional rebounding and inside scoring to the team, while also mentoring the younger forwards on the roster.

DJ Hughes | 6’6” freshman forward
Hughes is coming off a memorable senior season at Lawrence North where he averaged 13.5 points and a team leading 7.5 rebounds while shooting over 66% from the field on a team that finished with a record of 28-3. He will add additional wing depth to a roster with a good number of them as well as providing efficient low volume offense and good rebounding at the small forward and power forward positions.

Jayden Taylor | 6’4” freshman guard
Taylor had a very successful high school career capped off by a fantastic senior season. He averaged 25.5 points, 5.5 rebound and 1.2 assists while shooting 50% from the field, 37% from three, and 78% from the free throw line, leading Perry Meridian to their first winning season in six years. He gives Butler good size as a combo guard and also has real potential to be able to score from all three levels.

Thomas had a great senior season at Brownsburg where he averaged 21.6 points, 5.7 rebounds, 3.1 assists and 1.6 steals per game while shooting 38% from the 3-point-line. He gives Butler a knockdown shooter who can play multiple positions and also can potentially provide value in playmaking and on the defensive end.

Lukosius brings a unique experience to this team in the fact that he has played multiple years of professional international basketball. His 2019-20 season with Dragons Rhondorf was his best professional season. He posted averages of 14.8 points, 4.8 rebounds and 2.8 assists per game while shooting 47% from the field, 38% from three and 91% from the free throw line. He gives Butler a lot of experience for a freshman as well as someone who can play multiple positions and can potentially be a low volume three level scorer.