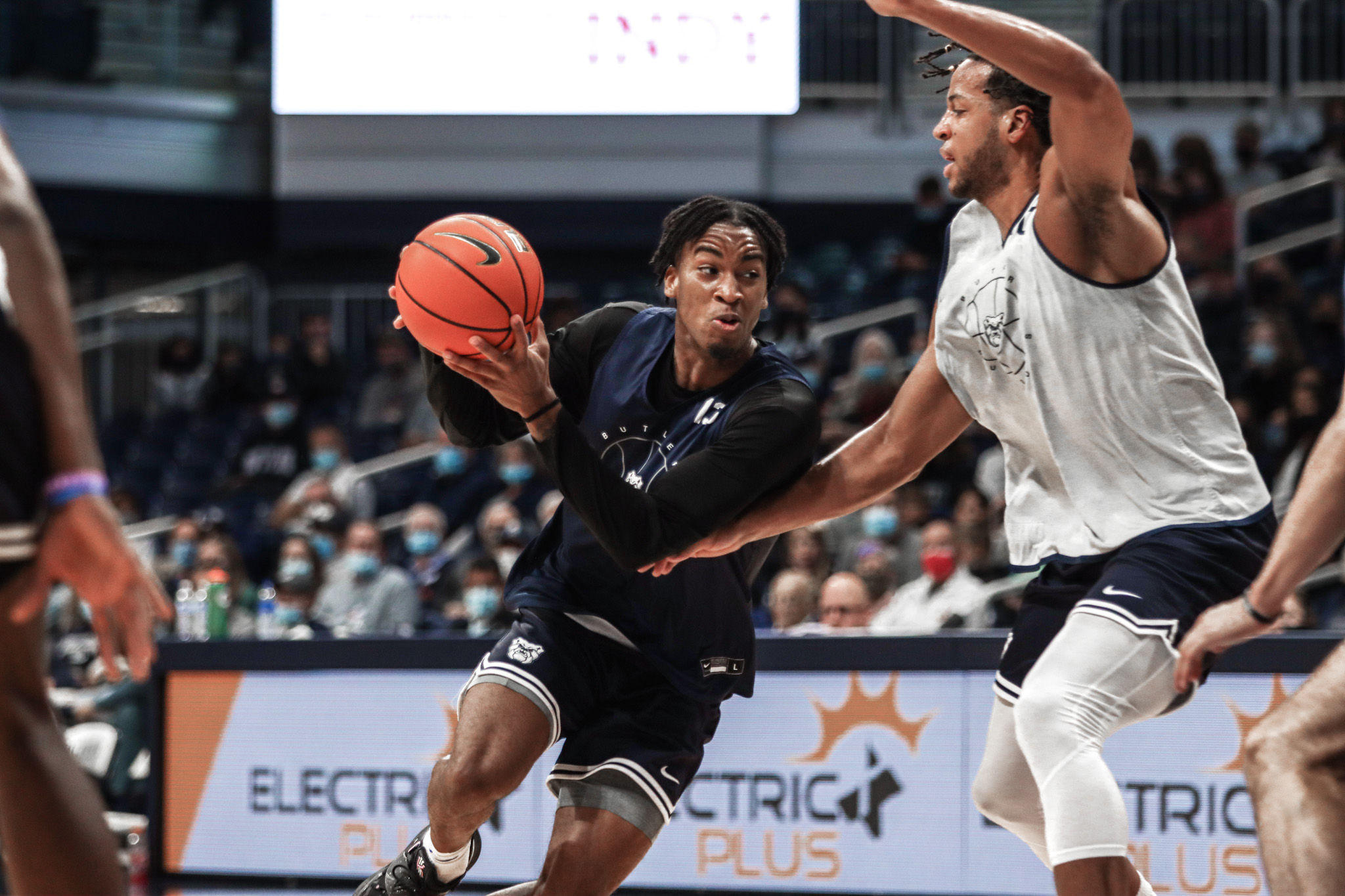 Heading into the 2021-22 college basketball season, the Big East is shaping up to once again be one of the top conferences in the nation. Villanova leads the pack, earning a preseason top-five national ranking and still seems to be the team to beat, but not by a large margin.

Following UConn in the preseason coaches’ poll was Xavier at third. Butler was predicted to finish sixth.

The conference as a whole is eagerly awaiting a return to a somewhat normal season. Before the season starts, let’s take a quick look at what the conference will look like this year.

The teams are listed in order of their projected finish in the conference standings according to the preseason coaches’ poll.

Jay Wright’s eventful summer as an Olympic coach was highlighted by a gold medal, but he received even more good news when Collin Gillespie and Jermaine Samuels both decided to take an extra year and return to college basketball. Gillespie was picked as the Big East Preseason Player of the Year, while Samuels and junior guard Justin Moore were selected to the All-Big East Second Team in 2020-21.

Villanova also has another fifth-year player in Dhamir Cosby-Roundtree, who is coming off of a year long layoff as he recovered from lingering leg injuries. Cosby-Roundtree’s health will be a concern for the team, but if he plays — he can be the same force he was down low for the national championship team in 2018. The Wildcats easily look like the best team in the conference and will look to defend their regular season conference championship once again.

Freemantle and Scruggs both enter the year as preseason All-Big East First Team selections, with Scruggs being a unanimous decision. Fremantle will return as one of the best big men in the conference and will get a reliable front court partner in Iowa transfer Jack Nunge. Nunge is coming off of a season-ending knee injury last season after two years of being a fan favorite for the Hawkeyes. Xavier will also return a large portion of their key contributors from last season and have their sights set on making a run at the Big East championship.

St. John’s loses many of their key players from last season, but compensates for that loss by acquiring an abundance of transfers. Aaron Wheeler and Joel Soriano highlight that group, as Soriano was one of the best centers in the Atlantic 10 conference last season at Fordham and is projected to be a starter for the Red Storm.

Wheeler was a breakout candidate for Purdue after a promising freshman year but has not had the career many expected him to. However, he is still an athletic specimen and an outstanding athlete who has an endless highlight reel of explosive plays. Wheeler will join St. John’s as a junior after three years as a Boilermaker. Reigning Big East Freshman of the Year Posh Alexander and the 2020-21 Big East scoring leader Julian Champagnie will be the catalysts for St. John’s in a very promising year.

The Pirates will definitely miss the 2020-21 Big East Co-Player of the Year in Sandro Mamukelashvili. However, they will return their second and third leading scorers from the past year in Jared Rhoden and Myles Cale. Rhoden, now a senior, was a member of the preseason All-Big East First Team.

Seton Hall will also add a few interesting transfers, as Jamir Harris was one of the most prolific shooters in the country last season at American University, averaging the most 3-pointers made per game in the nation on his way to averaging 20 points per game. Alexis Yetna also comes in from USF and can be a reliable big man to give head coach Kevin Willard excellent and physical minutes. How well the transfers integrate into the team will determine the success of Seton Hall this season.

Butler is amongst the top in the country in returning players from last season. Of the players who received meaningful minutes last season, only JaKobe Coles — 17.7 minutes per game in six games played — has left the team. Aaron Thompson, Bryce Nze, Jair Bolden, Bo Hodges, and Christian David all opted to return for one more year as fifth-year seniors.

Chuck Harris is coming off of a promising start to his career which earned him a spot on the Big East All-Freshman team and is the only Bulldog to receive preseason recognition as an honorable mention. Harris is the first freshman to lead Butler in scoring since Tony Warren in 1979-1980. Butler will be one of the oldest and most experienced teams in the conference and will attempt to use continuity and development to surprise those who expect LaVall Jordan’s squad to repeat last year’s production.

Providence’s Nate Watson will enter the season a member of the preseason All-Big East First Team and projects to be one of the best centers in the conference. Though he led the team in scoring last season, the Friars’ best player was undeniably David Duke Jr., who is now in the NBA. Duke’s production will be hard to replace. He was second on the team in scoring with 16.8 points per game last season, just barely behind Watson, but was hands down the go-to scorer for the Friars while leading the team in assists with 4.8 per game.

However, junior Jared Bynum was an excellent backup point guard last season and should step right into the starting lineup. Watson is a matchup nightmare and was named to the preseason Kareem Abdul-Jabbar Award watchlist, given to the nation’s best center. His production will be there, but trying to replace Duke will be the biggest challenge for the Friars.

After finishing second in the conference, Creighton loses its top five leading scorers from last season and the entire starting five. Division II graduate transfer Ryan Hawkins, who at 6-feet 7-inches tall, is a tremendous sharpshooter, is an interesting new piece for the Blue Jays. Hawkins averaged over 20 points per game at Northwest Missouri State and will test his skills in the Division I game.

Head coach Greg McDermott will also bring in a McNeese transfer in KeyShawn Feazell, who should provide depth at power forward. Backup center Ryan Kalkbrenner is the top returning scorer from last season at just 5.9 points per game. After a great season in 2020-21, a step back is expected for the Blue Jays with so many key pieces gone.

Marquette will lose a significant amount of key players from last year and will return just three. In addition to that, the team will begin the year with a new head coach, Shaka Smart. Smart looks to find success with the Golden Eagles after an unsuccessful stint at the University of Texas. As one of his first moves as head coach, Smart brought in Darryl Morsell from Maryland, who could be the most impactful transfer player in the conference.

Morsell is coming off of a Defensive Player of the Year campaign in the Big Ten Conference and was one of the best two-way players in the nation a season ago. Along with Morsell came the former Atlantic 10 Freshman of the Year in Tyler Kolek as well as Oklahoma transfer Kur Kuath and Clemson transfer Olivier Maxence-Prosper. Marquette’s starting lineup could be a true toss up and could also change frequently throughout the season due to their lack of experience.

Patrick Ewing’s squad shocked the country by going on a surprise run to win the Big East Tournament and earned a bid into March Madness. Unfortunately, the Hoyas will lose their top five scorers from last season and only return two players who received significant minutes. Ewing will get a big new addition to the team, however, in the preseason Big East Freshman of the Year, Aminu Mohammed.

Mohammed is a former McDonald’s All-American and two-time Gatorade Player of the Year and should immediately be one of, if not the best, players for the Hoyas. Georgetown will also receive another key freshman in Ryan Mutombo, the son of Hoya legend and former NBA star Dikembe Mutombo. Mutombo stands at 7-foot 2-inches and could start right away. Georgetown will rely heavily on their freshman this season for the first time since signing one of their most hyped recruits of all time in Mac McClung in 2018.

Losing Charlie Moore will hurt, but the Blue Demons will return one of their two leading scorers and arguably their best player last season in Javon Freeman-Liberty. DePaul will bring in a number of power five transfers like Jalen Terry coming in from Oregon and Tyon Grant-Foster choosing to become a Blue Demon after one year at Kansas.

DePaul is coming off of another rough season and finished last in the Big East in 2020-21, but will look to turn things around with a promising group this season. The Blue Demons could surprise many teams who choose to overlook them with more talent this year. This year will also be the first season for Tony Stubblefield, who replaces Dave Leitao as head coach.