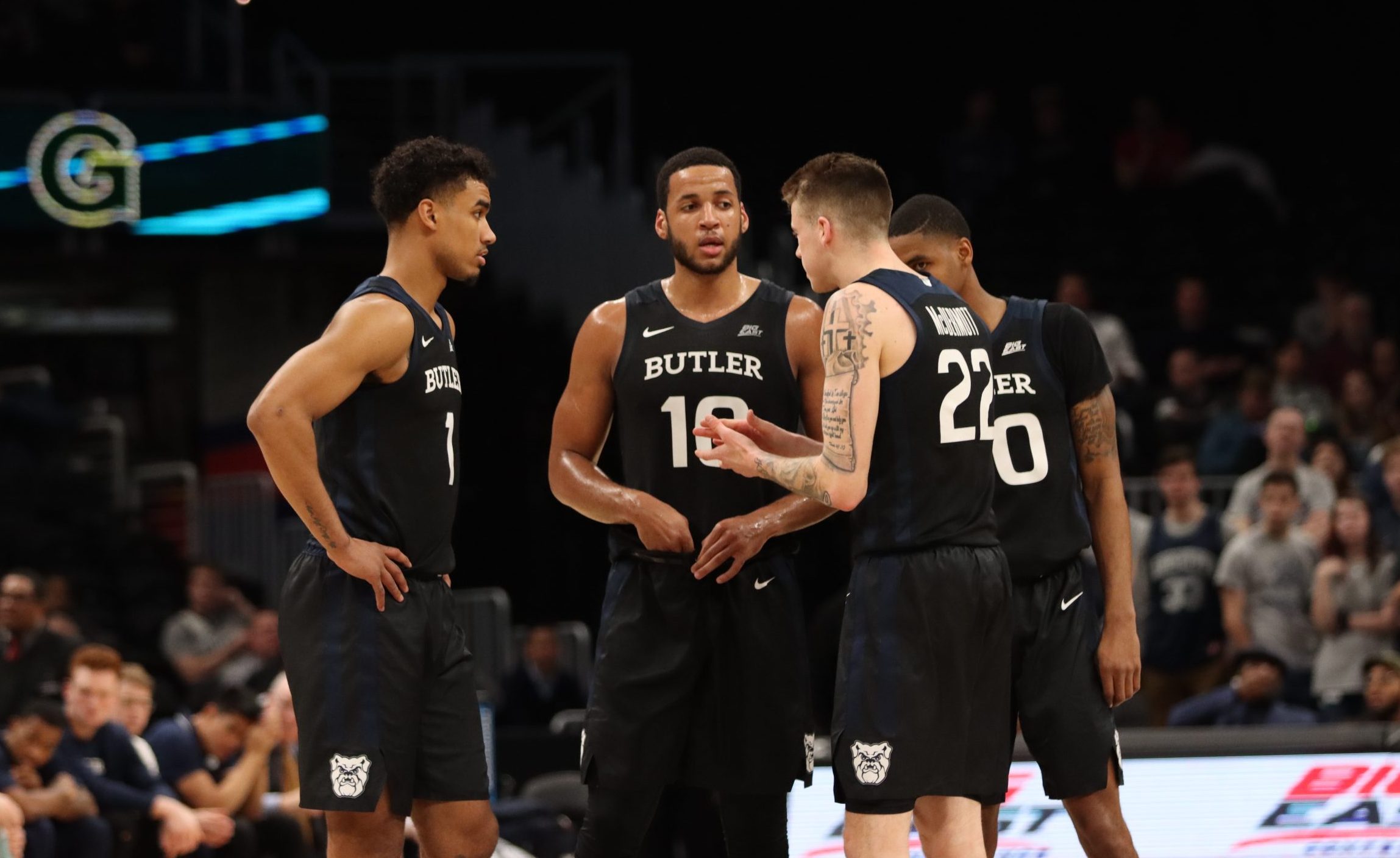 Butler huddles during a game this season. The Bulldogs host Xavier on Feb. 12 and Georgetown on Feb. 15. Xan Korman / Collegian file photo.

The last week of Butler men’s basketball has been one of extremes. After defeating the 10th-ranked team in the country on a buzzer beater at home, the Bulldogs, looking for their first great road win of the season, lost by 19 points – their largest margin of the season – to a team then outside the top 25.

Put it all together, and Butler finds itself 19th in this week’s AP Top 25 poll, the exact same place it was seven days ago. While the team is undoubtedly still in a fine position, time is certainly running out for the Bulldogs to make any potential run toward the top of the conference standings.

In this week’s Butler basketball reset, let’s take a closer look back at the past week, the recent trends, where things stand now and what lies ahead:

The Bulldogs began the second half of Big East play last week looking to rebound from a rough 65-61 home loss to Providence. They also had their best defender and ball distributor Aaron Thompson back after three missed games due to a left wrist injury. First up was a Feb. 5 home matchup against the 10th-ranked Villanova Wildcats. Villanova’s top two scorers combined for 57 points, but the Bulldogs got their most well-rounded offensive attack of the season – including a career-high 18 points from Bryce Golden – and after 39 minutes of high-level basketball and a nearly 20-minute weather delay, the score was tied at 76. With time expiring, Kamar Baldwin knocked down a stepback three to lift Butler over Villanova 79-76.

What followed that high was a disheartening low. Butler traveled to Milwaukee to square off against Marquette on Feb. 9. After a strong first 10 minutes, Butler’s offense fell flat. Baldwin and Bryce Nze combined for 37 points on 64% shooting, but the rest of the team scored just 20 points on 22% from the field. Despite just 17 points from Markus Howard, his lowest total in Big East play, the Golden Eagles defeated the Bulldogs 76-57. Butler’s 57 points was its lowest mark in Big East play and its second-lowest total all season.

A win over Marquette would have pushed Butler into a three-way tie for second place in the Big East standings. Instead, the Golden Eagles are in that position, while the Bulldogs find themselves in a two-way tie for fifth in the conference with a 6-5 Big East mark. Butler is four games back of 10-1 Seton Hall with just seven regular season contests remaining.

As mentioned, Butler remains at 19th in this week’s AP poll. From this time a week ago, the Bulldogs have slipped one spot in the coaches poll, two spots in the NET rankings, and eight positions at KenPom. Butler’s 23rd rating at KenPom is its lowest since Nov. 16.

On Feb. 8, the NCAA Tournament selection committee released a bracket preview which showed Butler as a No. 4 seed in the East Region, and No. 15 overall. That was prior to the Bulldogs loss at Marquette.

In Big East play, as Sean McDermott goes, Butler goes: The redshirt junior’s two games last week were a complete 180 of each other. Against Villanova, McDermott scored a team-high 21 points on 7-of-8 shooting, including a perfect 3-of-3 from beyond the arc. Butler’s game against Marquette was just McDermott’s second all season without a made field goal. He finished 0-of-5 from the field, including 0-of-3 from deep, with two points – both coming from the free-throw line.

McDermott has had a few games in recent weeks where he’s simply not shot the ball well at all. Butler lost those games by their two largest margins this season. The senior and the coaching staff need to figure out a plan for him to get involved more even when he’s not shooting well.

A 3-point shooting trend: Last season’s Butler team was often over-reliant on good 3-point shooting to win games. While that hasn’t been as much the case this season overall, the numbers do show a big difference in perimeter shooting between wins and losses.

In the Bulldogs’ conference victories, they’re shooting just shy of 40% from beyond the arc. In their losses, that number is just under 24%. That 16 percentage point difference is certainly attention-grabbing. And even if you take out Butler’s 1-of-14 3-point performance against Providence, there’s still a nearly 13 percentage point gap. Make no mistake, this Butler team can win without great perimeter shooting, but there’s undoubtedly a trend building at this point.

Bryce Nze: This time last week I wrote that the best from Nze, who was averaging 10 points and 7.25 rebounds in his last four contests, could be yet to come. While the best may still be ahead, Nze continued to impress last week. The redshirt junior scored 12 points against Villanova and 14 at Marquette on a combined 11-of-17 – 65% – from the field.

Over Butler’s last six games, Nze has knocked down two-thirds of his field goal attempts and is averaging 11 points per contest. Big East coaches have talked about how well Butler plays through Nze. The Bulldogs will need him to keep up his strong play moving forward.

Jordan Tucker: It looked like Tucker could be a big offensive spark off the bench at Marquette, as the junior forward scored seven points in his first six minutes of action. But he didn’t score again the rest of the way, finishing with 3-of-12 from the field with seven points. In the Bulldogs’ game against Villanova last week, Tucker played 23 minutes but didn’t convert a single field goal, finishing with just two points.

After posting double-digit point totals in four of Butler’s first five conference games, Tucker has only scored 10-plus points in one of the six games that have followed. Tucker doesn’t need to score 15-plus points for the Bulldogs to be in a good position offensively, but when he and McDermott both aren’t making shots, it significantly limits Butler’s offensive options.

The Bulldogs return to Indianapolis for their first week with two home games during Big East play this season. On Wednesday, Feb. 12, Butler will host the Xavier Musketeers. This will be the first matchup this season between these the Bulldogs and Musketeers, who are 5-6 in Big East action and 16-8 overall. Xavier is on a three-game winning streak with victories over Seton Hall, DePaul and Providence. The Musketeers are 44th in the NET rankings and 46th at KenPom.

In its second game of the week, on Feb. 15, Butler will attempt to sweep the season series against Georgetown. Playing without Thompson, the Bulldogs overcame an 11-point halftime deficit to defeat the Hoyas 69-64 in the nation’s capital on Jan. 28. McDermott finished with a game-high 25 points. Georgetown has gone 2-1 since then, with wins over St. John’s and DePaul and a loss to Seton Hall. The Hoyas are 52nd at KenPom and 53rd in the NET rankings.