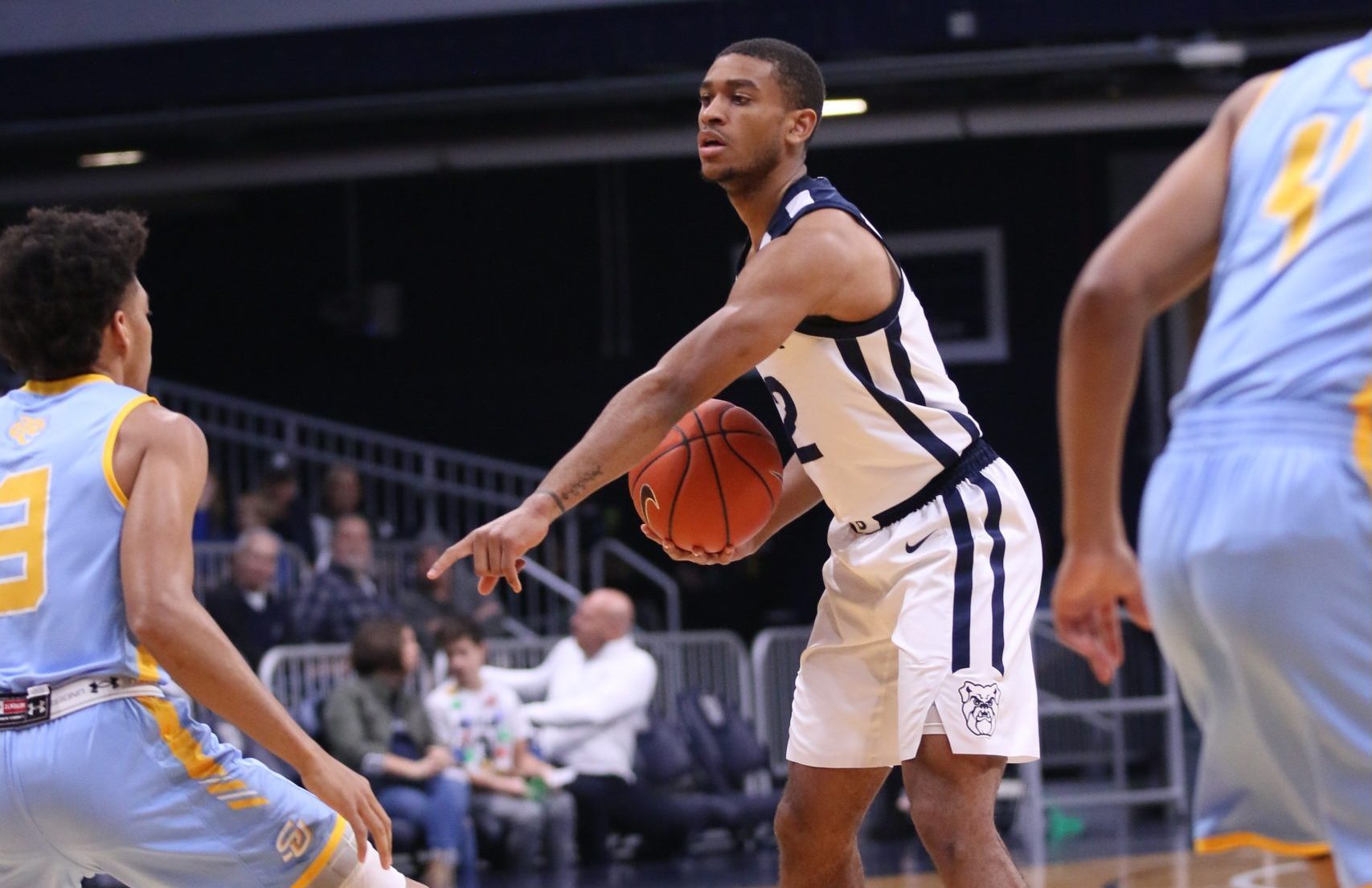 Aaron Thompson directs the Butler offense during the Bulldogs’ victory over Southern on Dec. 14. Thompson has missed Butler’s last three games due to a left wrist injury.

A great facilitator. A high-level defender. The guy that makes them go.

A player who makes everyone around him better.

The first three descriptors are from opposing Big East coaches. The last is mine.

From the fourth game of LaVall Jordan’s tenure as Butler head coach — in November 2017 — until less than two weeks ago, there was just one player who’d appeared in every single Bulldogs’ starting lineup: Thompson. That run ended on Jan. 24, when the junior guard missed Butler’s game against Marquette due to a left wrist injury suffered at Villanova on Jan. 21.

Since Thompson’s injury, Butler has won two of its three games. This Butler team can win without Aaron Thompson. That’s one way to look at it.

Here’s another: Aaron Thompson’s absence narrows the number of paths to victory for the Bulldogs tremendously. The margin for error is much smaller. And in the Big East, even the smallest of margins can make all the difference.

Butler’s first game this season without Thompson, one of the best defensive guards in the country, happened to be against the team with the nation’s leading scorer, Markus Howard. Not ideal timing.

Against Marquette on Jan. 24, Kamar Baldwin and Henry Baddley helped limit Howard to an inefficient 8-of-27 from the field, and Baldwin scored 19 points in the second half to force overtime before tallying 10 more points in the extra five minutes. Butler won a wild game in overtime 89-85 to stop a three-game skid.

The Bulldogs got an extraordinary performance from Baldwin. The senior tied his season-high with 31 points.

Against Georgetown on Jan. 28, it was Sean McDermott’s turn for a huge game offensively. The redshirt senior made it clear he’d broken out of a recent shooting slump, knocking down 9-of-12 field goal attempts, including seven 3-pointers, which tied his career high. After outscoring the Hoyas 37-21 in the second half, Butler left the nation’s capital with a 69-64 victory.

McDermott finished with 25 points, his most since his 26-point performance against IUPUI in the Bulldogs’ season opener.

Against Providence on Feb. 1, no one was able to play the hero. Baldwin tried, scoring nine points in the first 14 minutes of the second half to help Butler tie the game with 6:40 to play. But this time the magic ran out. The Friars’ knocked down a clutch 3-pointer — something the Bulldogs couldn’t do all game — with roughly five minutes remaining, and that was that. Butler lost at home 65-61.

Five Butler players — Baldwin, McDermott, Bryce Golden, Bryce Nze and Jordan Tucker — finished in double digits, four of them surpassing their season scoring averages. But without Thompson, a handful of fine, but not great, offensive performances wasn’t enough. And therein lies the problem.

The Bulldogs were missing their anchor on both ends of the court, and it showed.

When Friars coach Ed Cooley walked into the Butler media room postgame, the first player whose name he mentioned was one who didn’t take the court.

“When Butler’s missing a kid like Thompson…” Cooley began less than 20 seconds into his opening statement.

“Not having Thompson on the floor to facilitate, it takes away from their offensive efficiency,” Providence’s coach said in reference to a question about Butler’s season-worst 1-of-14 performance from beyond the arc. “When he’s healthy and the ball is moving [opponents] have to have eyes on all three of those guys [Baldwin, Tucker and McDermott], where Thompson is just a great facilitator. And he’s super tough.”

The ripple effect of Thompson’s absence against Providence that Cooley described is the proof of his impact on this team.

With Thompson sidelined, Baldwin is forced into a vastly increased role running the offense as a ball distributor in addition to taking on higher-level defensive assignments. It’s an awful lot to ask for Baldwin to do that while also scoring at a high level.

“It takes away his natural gift of scoring,” Cooley said.

With Baldwin as the only real guard in the game for the Bulldogs for much of the time, the Friars were also able to focus more attention on McDermott and Tucker, preventing open threes and forcing the catch-and-shoot forwards to drive toward the basket, often resulting in fouls.

“They were really glued to Sean and Jordan,” Jordan said postgame. “So it was hard to free them up.”

The game thus turned into an interior battle, which Butler won, but barely. After out-rebounding the Friars by 18 in Rhode Island, the margin was just +3 at Hinkle Fieldhouse. Providence was more ready for the interior battle this time, because they forced it.

That’s a lot easier to pull off without Thompson on the floor.

This was not the first time Thompson’s absence had a pretty obvious impact on the outcome of a game.

Against Seton Hall on Jan. 15, Thompson played just three minutes in the second half due to foul trouble. After scoring 40 points in the first 20 minutes and leading by 10 at halftime, Butler sputtered offensively without Thompson down the stretch, shooting 30% from the field in the second half.

“When you watch them, obviously McDermott and Tucker … and Kamar Baldwin [is] as complete a guard as there is in the country,” Pirates head coach Kevin Willard said postgame. “But I really think Thompson’s the guy that makes them go.”

And that was just on the offensive end.

On the defensive end, the conference’s second-leading scorer, Myles Powell — whom Thompson had been guarding — scored 19 points in the final 20 minutes and got Thompson to foul him on a 3-pointer for the Butler guard’s fifth of the game.

“If you don’t neutralize Aaron Thompson he’s going to get you,” Willard said. “Because he’s also a high-level defender.”

From Howard to Powell to Georgetown’s Mac McClung and Villanova’s Collin Gillespie, the Big East has some of the best offensive guards in the country. There’s no one better at limiting players like them than Thompson.

Having Thompson out of your equation is like taking a part out of a foundation. Can the building still stand without that part? Yes, it’s certainly possible. But everything it usually supports is suddenly more vulnerable, and there’s little room for weak links.

For an opponent whose goal is to knock down the building, that missing piece is enormous.

“Not having him is so critical,” Cooley said, pausing then for a moment. “So, so critical.”

Aaron Thompson is sixth on Butler in points per game. He’s also sixth in rebounds per game. But anyone looking primarily at those numbers when judging Thompson doesn’t understand his true value to this team.

Thompson’s true value is not typically visible in his final stats. It’s in the final stats of everyone around him.

And that’s why he’s Butler’s most important player.