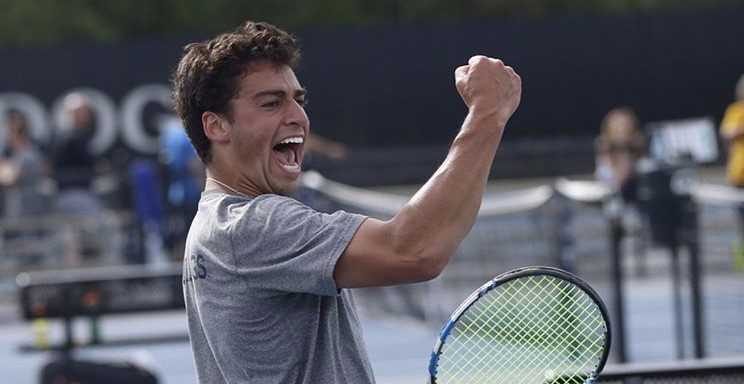 Ari Gerstein walked into the office of former men’s tennis coach Parker Ross with a nerve-racking question. He was nervous about Ross’s response to a request to study abroad, knowing that in many cases, athletes never get the opportunity.

Training schedules, team building, off-season preparations and other responsibilities that come with being a student athlete often eliminate any chance.

Yet, none of these things deterred Gerstein from at least attempting to ask. For him, there was something to gain by going abroad. Ross could see this. To the surprise of Gerstein, he was given permission to train elsewhere for the fall 2018 semester.

“Most coaches have a hard ‘No’,” Gerstein said. “I got really lucky that I was able to convince my coach to let me go [abroad].”

As a sophomore, Gerstein was part of the team’s very first Big East championship in 2017, posting a 21-13 record in singles his second year at Butler.

Now a senior, he’s helping Butler improve on their 2018 record. The Bulldogs are sitting at 15-6 so far this year with five matches remaining, while they finished 14-7 last season.

Gerstein was 2-0 in singles this season before suffering an undisclosed injury that has forced him to miss the last eleven matches.

Former doubles partner Aviv Ben Shabat said Gerstein plays a key role in the Butler program as a strong willed player who many of his teammates can look up to.

“I had the honor and fun playing with him and achieving such great results in our career at Butler,” Ben Shabat said. “Great teammate and great friend, always looking to help to others off and on the court.”

After getting permission from Ross to go abroad, Gerstein began to research locations to study right away. He wanted to go somewhere warmer, like Rome or Madrid so he could train outdoors.

Eventually, he settled on Lingnan University, located in Hong Kong, China. Gerstein said he picked Hong Kong because he wanted to experience a completely new culture. There was so much to offer, with new foods, art, sights to see and more.

Gerstein signed up for classes similar to what he does at Butler, taking classes on finance and information systems.

“I also just took a general Hong Kong history class just to kind of learn more about the area I was living and studying in,” he said. “Students there I feel are really smart but I think they study less until they have an exam coming up and they’ll kind of cram for it.”

Gerstein said all-nighters are common for Chinese students. When they aren’t studying, they do what normal college kids do — hang out with friends, play video games, and grab a quick bite to eat.

“I think [the activities] were things a lot of college people do but to more of an extent than what we do here,” he said.

In his time away from studies, Gerstein reached out to train with players from China’s junior national team, as well as a local academy coach, and other exchange students from both the U.S and France. It wasn’t structured training, but it was an enjoyable experience for him to play against new talent.

“There are structured academies that I could’ve paid to go play and train,” Gerstein said. “But what I did was just hit with a group of five or six guys and I played a few tournaments while I was over there just to stay in shape and make sure I could still compete at a high level.”

Each time Gerstein goes out to practice, he has a focus on something he wants to improve upon. In Hong Kong, the primary focus was the development of his backhand shots.

“I’m always working to try and improve my weaknesses, whether it’s there or here,” he said.

Gerstein said playing against other opponents gave him competitive experience trying new things in an environment that did not keep records or stats.

While playing against opponents, Gerstein would serve up conversation starters.

“I always had a nice conversation with them just to learn more about who they were, what their culture and backgrounds were like,” he said. “With the Hong Kong guys it was nice to pick their brains and ask them questions about cool things to do in Hong Kong.”

Conversations such as these allowed Gerstein to build friendships with locals in China as well as other players from across the world.

By building his own training schedule, he had more flexibility to do other things he wanted while abroad, such as traveling and spontaneous trips to different parts of Asia.

One of Gerstein’s favorite memories was taking a 300-mile motorcycle trip through the Ha Giang mountains in Vietnam and staying with local families.

“The scenery was the most beautiful of my entire trip,” Gerstein said.

They would eat with the families and play games with their children, despite the fact that they spoke very little English.

Following his return, Gerstein looked back on his experience, admiring the fact that he was able to represent Butler’s athletic program even beyond the United States. Some players in China, while they may not have known about Butler, had come to him to ask questions about playing college athletics in America.

“I definitely found it to be a very unique experience,” Gerstein said. “And an opportunity that I really will cherish.”

Butler men’s tennis head coach Daniel Pollock was hired in August 2018 before Gerstein returned, but has said the senior has readjusted to the team and system well.

“Ari is a great example of a student-athlete,” Pollock said. “He takes his academic success very seriously and brings a strong work ethic to practice on a daily basis.”

Gerstein said he believes his semester abroad was his favorite at Butler, despite not being on campus. After this experience, Gerstein hopes college athletic programs will consider allowing student athletes to study abroad and train.

“I think that between your cultural exposure, your growth independently, just maturing in general, being that far from home,” he said. “It’s a great experience and it’s really unfortunate that most student athletes don’t get to.”