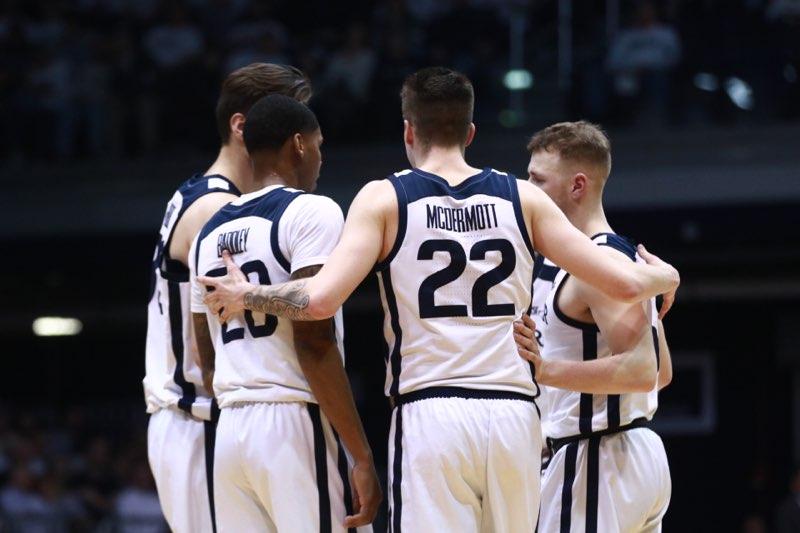 The Butler men’s basketball team huddles up during its win over DePaul on Feb. 16. Butler is now 15-11 overall and 6-7 in Big East play. Photo by Jimmy Lafakis.

The Butler men’s basketball team picked up a 91-78 win over DePaul in Hinkle Fieldhouse, trailing for a mere 27 seconds in the process. Butler is now 11-1 against the Blue Demons since joining the Big East. Here are three takeaways from an intriguing victory.

When the Bulldogs go 4-for-14 from deep in the first half, it almost always leads to major problems. However, despite missing seven of their first nine 3-pointers, the Bulldogs were able to generate 44 points of offense in the opening 20 minutes and 91 in the contest. They made 11 straight 2-point field goals to open the game and got to the free throw line 25 times, a major weakness all season long and especially in Big East play. Butler knocking down 57 percent of its threes after halftime was simply an added bonus.

The Bulldogs launched a total of 61 3-pointers between this game and the overtime loss at St. John’s, connecting on only 33 percent of them. Butler still managed to score 164 points in the two games, significantly higher than its season average of 73. The Bulldogs’ NCAA Tournament hopes could very well rest on their ability to go on the road and come away with a victory in a game where they shoot under 35 percent from deep. This game makes that scenario seem much more realistic.

2. The defense got bailed out by the offensive barrage.

Even an average defensive performance from Butler would have ensured a comfortable victory considering what the Bulldogs were able to do on offense. Instead, they had one of their worst showings of the season. The only team to shoot higher than DePaul’s 54.9 percent in Hinkle was Marquette. More concerning still, the Blue Demons connected on 53 percent of their 3-point attempts, a mark only bested by Georgetown. If that wasn’t enough, Butler committed 19 fouls and sent DePaul to the free throw line 21 times.

The Bulldogs have made a habit of winning the 3-point line all season long. In their last six games including this one, they’ve only done so twice. As a team that already struggles to defend the paint, Butler cannot afford to start losing on the perimeter as well. For the Bulldogs to steal a game at Marquette or Villanova, they have to guard at a much higher level. In the win at Georgetown, their initial defense was tremendous but they couldn’t end possessions with rebounds. Against DePaul, the exact opposite happened. Either scenario spells trouble if it persists over multiple games.

3. The Bulldogs dominated the glass.

DePaul entered as the best rebounding team in the Big East, averaging 12 offensive boards per game. The Blue Demons got exactly one extra possession in the first half and finished with four offensive rebounds, which speaks to the incredible job Butler did on the glass. Meanwhile, the Bulldogs got 11 offensive boards of their own and turned them into 14 second-chance points. Butler also won the overall rebounding battle by eight while talking six more shots than DePaul.

For the Bulldogs, whose 33 rebounds per game are tied for 301st in the country, to control the glass against an opponent inside the top 50 nationally in rebounding is an impressive achievement. It should not come as a surprise that Bulldogs recorded 18 assists, their highest total since Jan. 16, in a game where they rebounded the ball exceptionally well. The faster Butler gets the ball up the court, the more efficient its offense is. That entire process starts with securing rebounds.