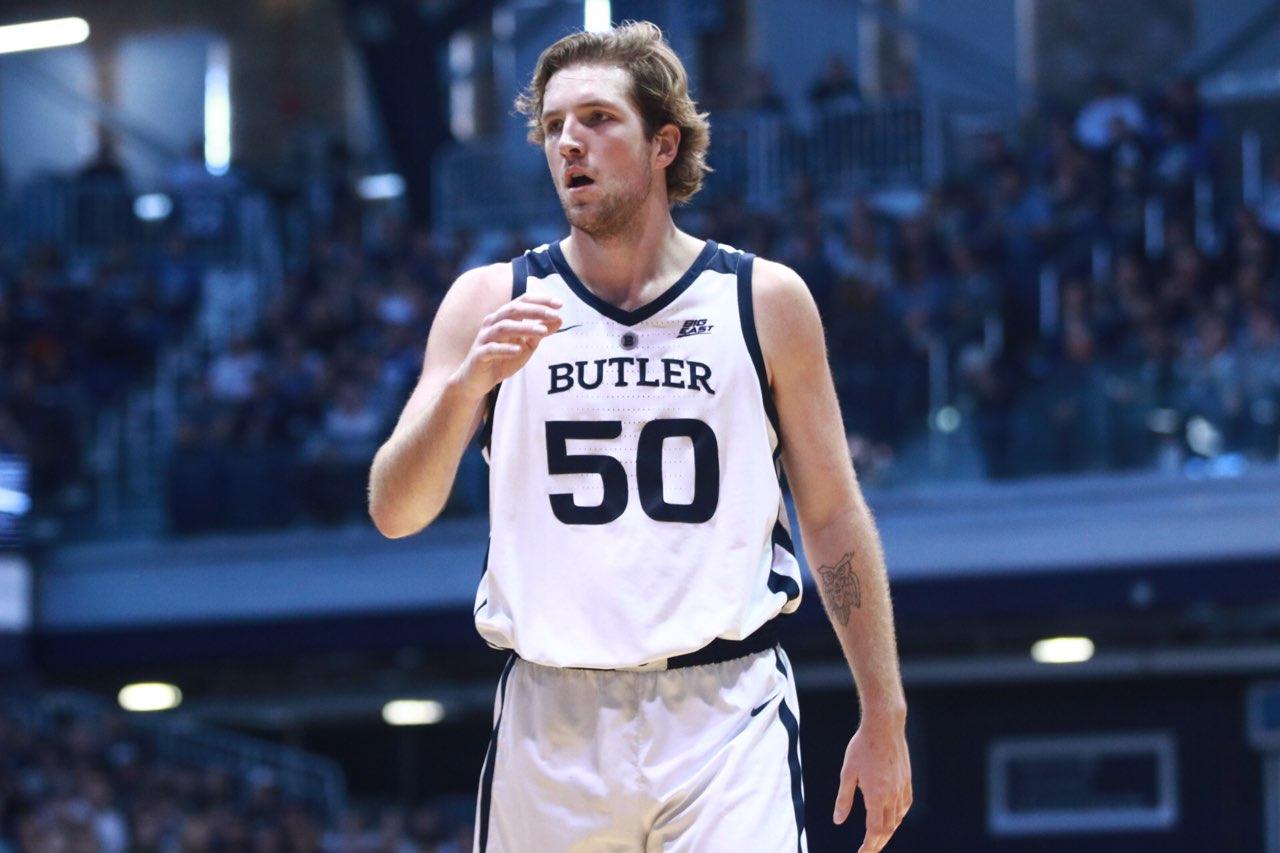 Joey Brunk looks up the court during Butler’s 84-69 win over Creighton on Jan. 5. Brunk scored 13 points in the contest. Photo by Jimmy Lafakis.

The Butler men’s basketball team responded following a rough start to conference play, defeating Creighton 84-69 at home on Jan. 5 to pick up their first Big East win of the season. Here’s a look at 10 key quotes from after the game.

On the game overall: “We weren’t very good the first half, and Butler was. It’s as simple as that. We had some open shots that we missed but they also forced us into 10 turnovers, which I thought, if you want to point to one difference in the game… They had 20 points off turnovers at halftime. That’s a tough number to overcome.”

On Nate Fowler and Joey Brunk: “I think the combination of their two bigs, Fowler and Brunk, is a good combination. They kind of bring a different thing. Nate hadn’t made a three all year, so he saved all three of them for us.”

On Kamar Baldwin: “I’ve always loved his game. I love his poise. He plays with such a good pace. He’s really hard to speed up. I think that’s a sign of a great guard, when you can’t get him to go at a speed that he doesn’t want to go at.”

On his team’s performance: “I’m just proud of a good team win. Obviously we needed to get back on the right side of things. You never know sometimes how you’re going to get there in terms of what you think you can be. But as long as you get there. And I think today, you caught a vision of what this group can become. Now it’s going to be about consistency.”

On facing Creighton: “Obviously Creighton’s really good offensively. We were worried about the 3-point line, and guys did a really good job of getting out to shooters. And they missed some open ones too, we didn’t get them all right, but the effort was there.”

On his changes to the starting lineup: “I just think… at the point where we were. Just a different energy and leadership. I thought [Paul Jorgensen] and Nate [Fowler] in particular … they were just kind of struggling confidence wise. To just change it up and let them settle down. … The conversation was it doesn’t really matter who’s starting, who’s finishing, as long as we are all doing our part and playing the right way.”

On his wardrobe malfunction: “It was a call I disagreed with, and I didn’t want to get too animated, so I squatted. And upon that movement I felt and heard a sound. And I thought of Ed Cooley right away, so I’m going to text coach Cooley.”

On building confidence as a team: “Me and the whole team, we’ve been in the gym getting shots up after practice. … It’s just a confidence thing. We’re just continuing to trust in it…”

On coming off the bench for the first time this season: “I think it kind of just made me wake up and realize I need to come every day with a lot of energy, which I just wasn’t bringing. And I brought my energy today, and it felt good just being out there and playing with … all my teammates.”