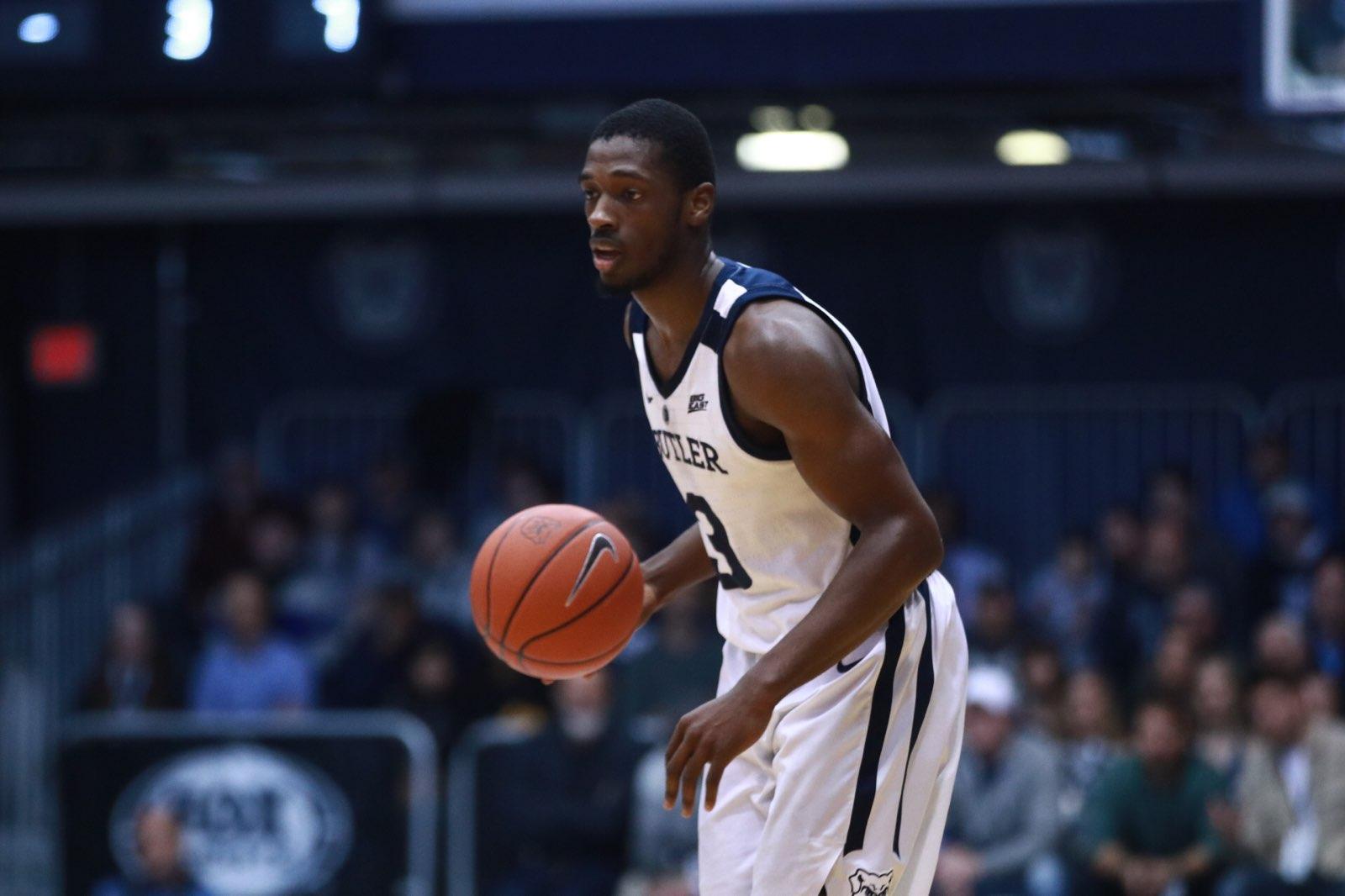 Kamar Baldwin surveys the floor during Butler’s game against Creighton. Baldwin scored a season-high 28 points in the win. Photo by Jimmy Lafakis.

The Butler men’s basketball team picked up its first Big East win of the season, defeating Creighton 84-69 at Hinkle Fieldhouse. Butler never trailed and led for nearly 38 minutes. Here are three takeaways from a much-needed victory.

1. The lineup change did exactly what it was supposed to.

Inserting Henry Baddley and Joey Brunk into the starting lineup could not have gone much better from LaVall Jordan’s perspective. Butler’s defense was excellent from the opening tip, holding the Bluejays to seven points in the first nine minutes and jumping out to an early 12-point lead. Nate Fowler came in and hit his first two 3-pointers of the season while playing with an intensity that hadn’t been there all year. Brunk and Baddley combined for 18 points and were key contributors on the defensive end as well.

The lineup change also rejuvenated Kamar Baldwin, who scored 18 first-half points and had his best game of the season. Baldwin finished with 28 points on 11-of-18 shooting, seven assists, and only one turnover, a remarkable stat line. Even if Jordan decides to go back to his normal starting five against Seton Hall, the shakeup achieved its goal. Fowler got his confidence back and the team’s demeanor improved dramatically. Baldwin breaking out of his slump was an added bonus. Jordan deserves an immense amount of credit for understanding his players and how to get the best out of them.

The Bluejays, who came into the game ranked third in the nation in 3-point field goal percentage, missed six of their first seven attempts from behind the arc and went 3-for-13 from three in the first half. Heading into the break, Butler was shooting 20 percentage points better than Creighton thanks to a 7-of-16 performance. The Bulldogs did plenty of things well to hold a 19-point lead at halftime, but nothing was more important than their ability to control the 3-point line on both ends of the floor.

Creighton made its first two shots from deep in the second half, the Bulldogs did enough to end with a 37-26 advantage in 3-point percentage. Against a team that relies on the three as much as the Bluejays, simply staying even with them from behind the arc usually results in a victory. Butler dominating the 3-point line made the difference between a close win and the 15-point win the Bulldogs ended up with. After two incredibly shaky games guarding the perimeter, Butler was outstanding against the most dangerous shooting team it’s faced to date.

3. The Bulldogs played like they knew what was at stake.

Staring at the possibility of an 0-2 start in Big East play with the next three games on the road, this game was going to play a large role in shaping the rest of Butler’s season. A loss would have put the Bulldogs’ NCAA Tournament aspirations in serious jeopardy. The win moves Butler to .500 in the conference and suddenly makes winning a game or two on that road trip seem like a realistic possibility.

There is no such thing as a must-win game this on Jan. 5, but this was about as close as it gets, both from a record and emotional standpoint. Butler heads to Seton Hall feeling much better about itself and without an immense amount of pressure. Jordan said he thought his team pressed too much in the Georgetown game after what happened at Florida. The Bulldogs found a way to channel their frustration into a positive intensity against the Bluejays. It’s still only one win, but what an important win it was.