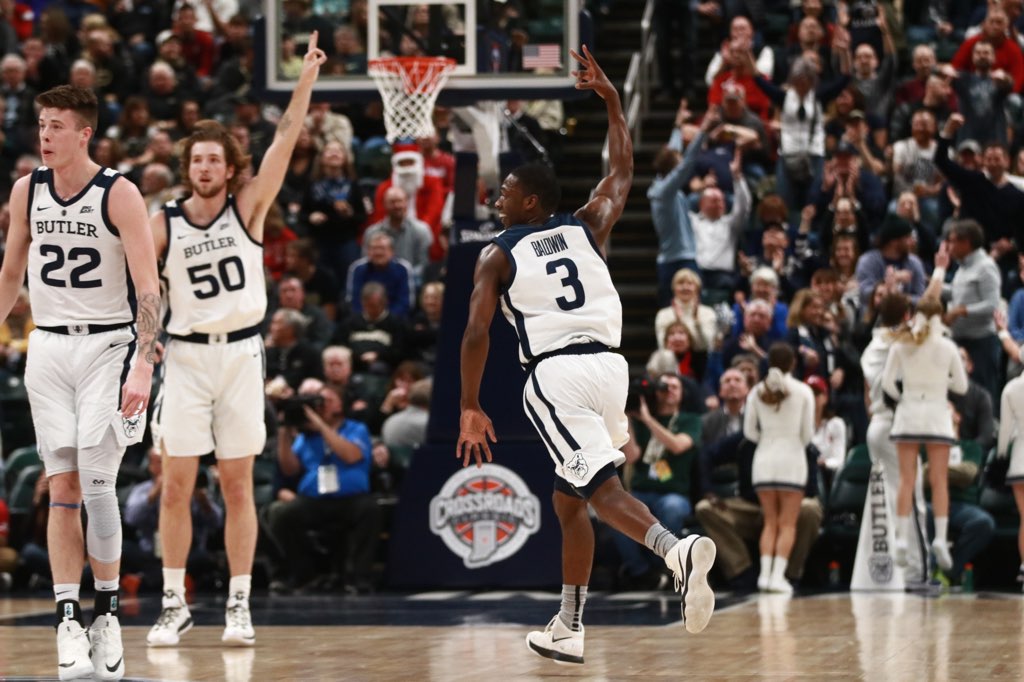 Kamar Baldwin celebrates a three pointer in Butler’s loss in an instant classic against Indiana, 71-68.

The Crossroads Classic is an event that is Indiana basketball at its purest. The highly anticipated event has been on a national stage every year, and it has led to some amazing moments.

Like in 2012, the Bulldogs took down the top-ranked Hoosiers.

To this day, the name Alex Barlow sends shivers down the spines of all IU fans #CrossroadsClassic pic.twitter.com/GOYhRfxhA6

Even though the stage was big, no stage is too big for this good boy.

And the people in the stands were as high-profile as the game.

And the trash talking between Butler and their in-state rivals has been going on all week.

My son upon seeing Indiana’s warmup pants, ‘Why are those men wearing those clothes?’ 😂 Exactly. Worst uniforms in sports

Part of the storyline on the Bulldogs side was the availability of Duke transfer Jordan Tucker. He started his time on the court with a bang.

Jordan Tucker is the #Butler all-time leader in 3-point percentage:
1.000.

Well that couldn’t have started better for Tucker!

And after the first half, Butler fans felt pretty good. It was nearly the epitome of Butler basketball. A grinder that was destined for a photo finish.

HT: #Butler leads IU, 38-34. Strong half overall for the Dawgs but the major adjustment at the break will likely be keying in on Juwan Morgan, who has 18 to lead the Hoosiers. #GoDawgs

And while eyes were focused on future NBA player Romeo Langford, Hoosier senior big man Juwan Morgan was a matchup nightmare for the Dawgs.

Juwan Morgan has 24 points with 12 minutes left, and is a threat to reach the all-time Crossroads Classic scoring record of 34 set last season by … Juwan Morgan. #iubb

It left a pretty sour taste in Butler fans’ mouths.

How upset am I right now? Currently contemplating taking off all red ornaments on our Christmas tree 😡 #GoDawgs

While looking at the stats, Butler’s inability to get to the line proved to be a potential difference maker.

Does Butler only have 2 FTA all game? Absolutely ridiculous

At the end of the day, this was an instant classic that will definitely be remembered when these two matchup two years from now.

What A Great Game

But to assume the Bulldogs played poorly because they lost would be an incorrect guess.

But for this week, Bulldogs fans will have to take a breath.

The sky is not falling, Bulldogs fans. Indiana will be a tournament team, and a good one at that. Now, it’s time to recuperate and focus on the remaining of the nonconference schedule before the Big East grind begins.

Butler will tune up for their road match at Florida in a couple weeks with a game against Presbyterian College on Tuesday from Hinkle Fieldhouse.