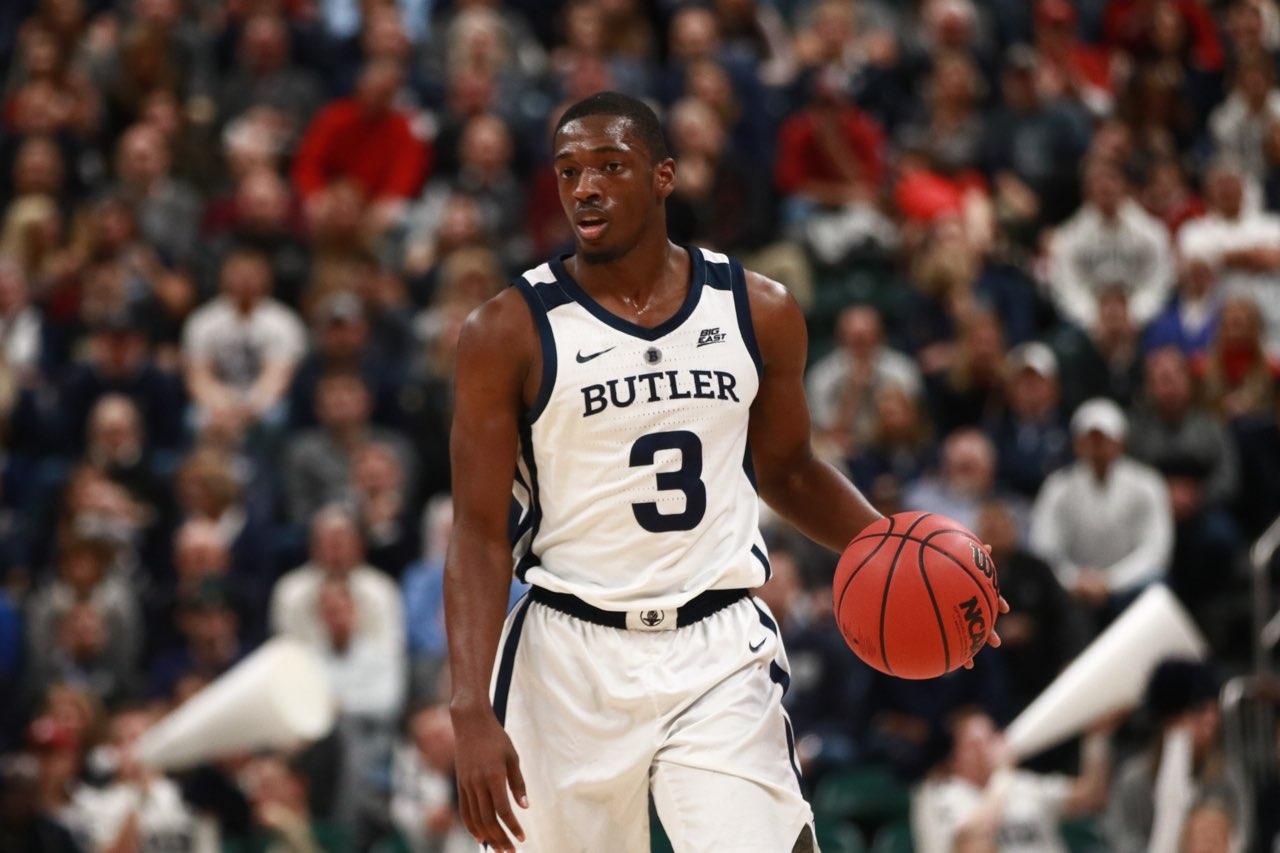 Kamar Baldwin brings the ball down the court during Butler’s 71-68 loss to Indiana. Baldwin scored 16 points in the contest. Photo by Jimmy Lafakis.

Facing off against the No. 25 team in the country, the Butler men’s basketball team led for nearly 35 minutes at Bankers Life Fieldhouse. But in the end, it all came down to one final shot, as a deep 3-pointer from the Hoosiers’ Rob Phinisee at the buzzer pushed Indiana to a 71-68 win over the Bulldogs in the Crossroads Classic on Dec. 15.

Until the final three minutes of the game, Indiana never held the lead. Butler jumped out to an early advantage in the first half and held it for the first 20 minutes of play.

Kamar Baldwin led the Bulldogs with nine first-half points, and Jordan Tucker made his Butler debut, knocking down a 3-pointer on his first shot to put his team up 20-13 midway through the first frame.

Despite a few challenges by Indiana, including an 8-0 run, Butler entered halftime with a four-point lead. The Bulldogs hit five first-half 3-pointers, but were outshot from the field 52 percent to 44 percent, thanks in large part to the Hoosiers’ Juwan Morgan, who tallied 18 points in the first twenty minutes.

Butler opened the second half on a positive note, knocking down its first four field goal attempts and outscoring Indiana 11-5 in the first four minutes. But behind hot 3-point shooting, Indiana slowly cut into the Bulldogs’ lead, and with eight minutes remaining trailed by just three points.

With 3:54 to play, the Hoosiers tied the game and with 3:05 remaining, they took the lead. After trading baskets in the final minutes, Indiana took control of the ball with just 18 seconds left. Indiana was unable to get the ball to Morgan or Romeo Langford, so with the clock expiring, Phinisee threw up a shot from roughly 25 feet, a shot which went in to seal a stunning victory for the Hoosiers.

Despite the loss, Jordan and Butler players said there were still plenty of positives to take away from the game.

“I think we played pretty well as a team,” Butler forward Sean McDermott said. “We stayed locked in. In the huddles we were as connected as I think we’ve been all season. … I thought overall we played a really good game and it came down to a final possession, and [Phinisee] made a tough shot.”

Morgan, meanwhile, broke his own Crossroads record with a 35-point performance, which included four 3-pointers.

With Butler’s loss and Indiana’s victory, the two teams now have identical 5-3 records in the Crossroads Classic.

The Bulldogs return to Hinkle Fieldhouse for their next contest on Tuesday, Dec. 18 against Presbyterian. Tipoff is slated for 8:30 pm.