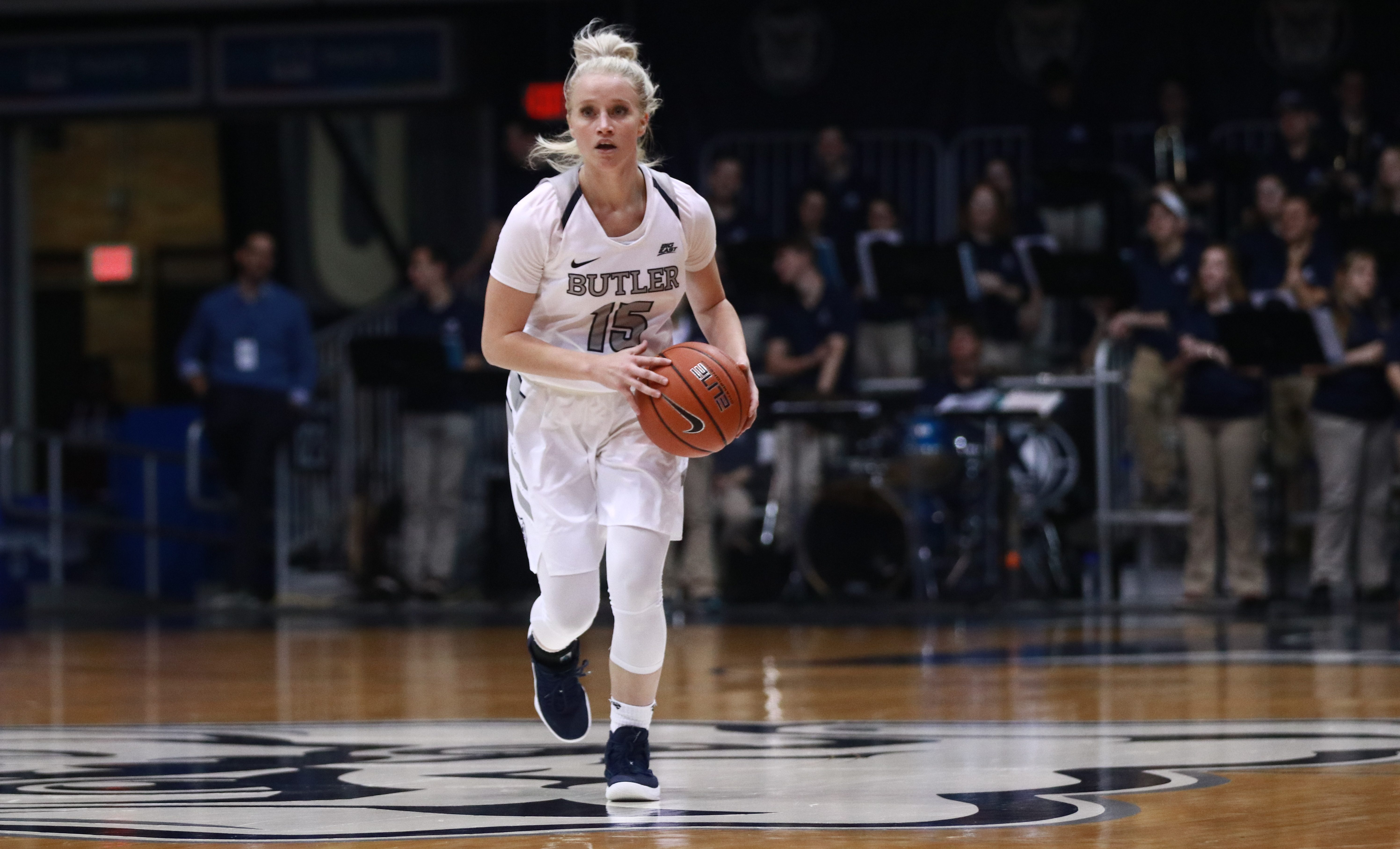 Whitney Jennings brings the ball down the court during the Butler women’s basketball team’s 86-65 win over Murray State on Nov. 13. Jennings led the Bulldogs with 24 points in the contest. Photo by Jimmy Lafakis.

Led by Whitney Jennings’ efficient 24 points on 10-of-13 shooting and Tori Schickel’s 18 points and 10 rebounds, the Butler women’s basketball team defeated Murray State in a high scoring affair, 86-65, on Nov. 13 and Hinkle Fieldhouse.

Jennings was inefficient last game — scoring only four points on one-of-six shooting — and if she didn’t have a natural scorer’s mentality, that performance could have infected her attitude. But that’s not her style, said head coach Kurt Godlevske.

“Great players have a long-term memory issue and short-term memory issue,” Godlevske said. “They forget that next shot, she just believes she’s going to make every shot. I believe it, we just tell her to shoot it.”

As unordinary and unsustainable as 86 points  — the second-highest total in Godlevske’s Butler coaching career — may seem, this game set the precedent for a new and expected normal.

“We want to play fast, it gets us more easy buckets. Plus, it’s easier to get the ball into Tori, Godlevske said. “It allows our guards to get their feet set and shoot it. We want to play as fast as we can.”

Despite Godlevske’s preference for speed, there were times where Murray State’s defense slowed them down to a screeching halt. Midway through the first quarter, Murray State was leading 15-11, and in the third quarter the Racers went on a 8-0 run to narrow the lead to 17.

“The first five minutes really sped us up,” Schickel said. “They did to us what we wanted to do to them. After the five minutes, we started pressing and doing the same thing.”

Both times, Godlevske whistled for timeouts and relied on experience to flip the script.

“We hadn’t worked on [the 1-2-2 zone] yet in practice. It was just something I drew up,” Godlevske said. “We’ve done it in the past, and that’s the benefit of having an experienced team.”

In both instances, the gamble on experience proved effective. Following the timeout in the first quarter, Butler went on a 11-4 run, forcing four turnovers. After Butler’s timeout in the third quarter, Murray State fumbled two turnovers and scored zero points. In total, Butler forced 23 turnovers, turning them into 27 points.

“To our kids’ credit, they understand defensively what they had to do. That was the big difference, they got after them defensively. We started forcing turnovers.”

The Bulldogs’ next game is Saturday, November 17, at 2 p.m. at Hinkle Fieldhouse, against Western Illinois.