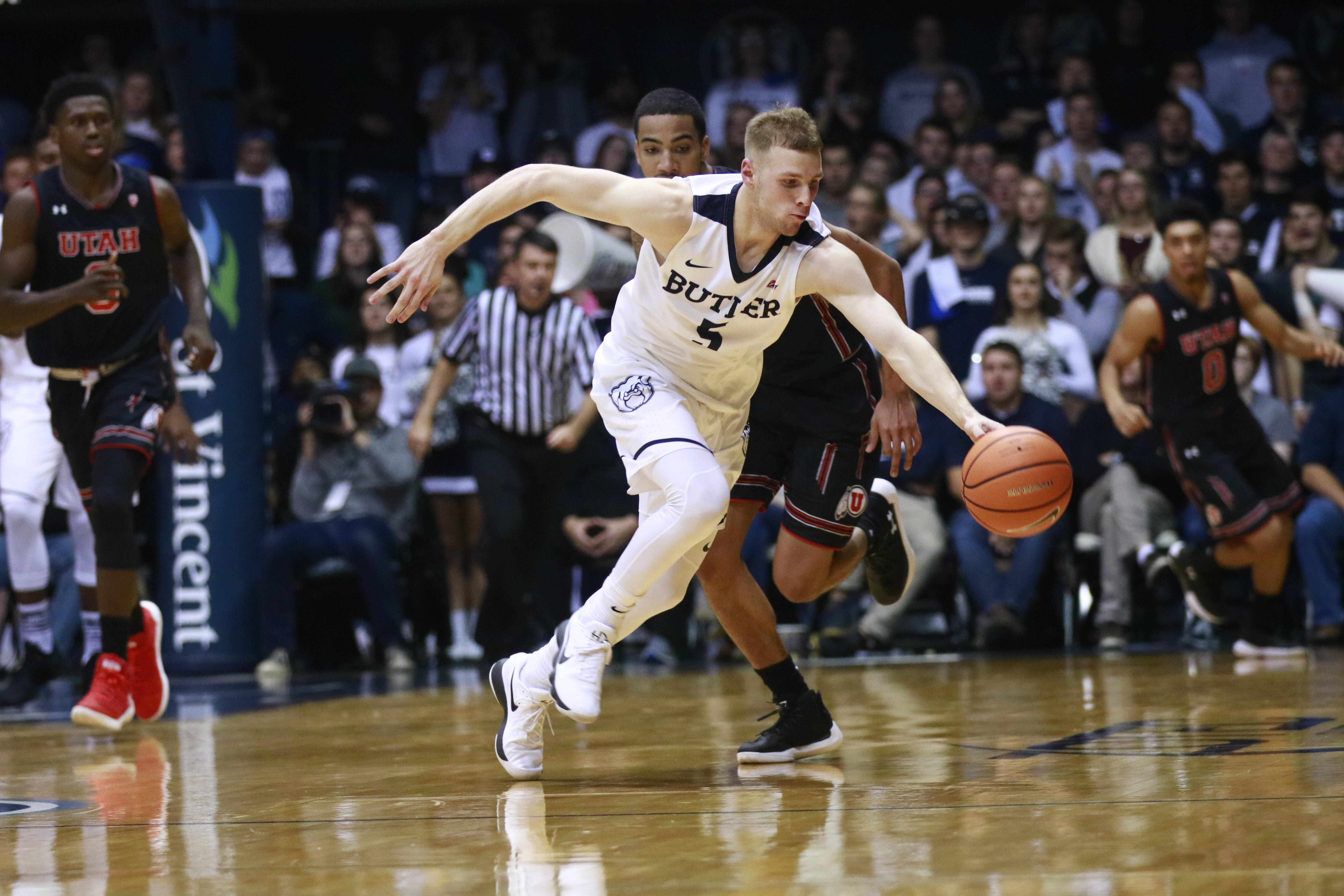 Paul Jorgensen brings the ball down the court following a steal during a game last season. Jorgensen could serve as a key secondary scoring option for the Butler men’s basketball team this season. Jimmy Lafakis/Collegian file photo.

Coming off a second-round appearance in the NCAA Tournament last season, the Butler Bulldogs need to answer five questions to succeed this season.

Junior guard Kamar Baldwin is no stranger to making adjustments on the basketball court. His freshman season, he played off the ball next to Tyler Lewis. His sophomore season, he switched to primary ball-handler and doubled his assist total. Now that Kelan Martin graduated, Baldwin will play on the ball and be tasked with the primary scoring role.

One reason for Butler’s success last season was that Martin complemented scoring with efficiency to become the school’s second all-time scorer. For Butler to reach its offensive ceiling, Baldwin will need to be a scorer, yes, but a highly efficient one at that.

On the court, efficiency is important, but off it, smaller improvements are just as essential. In the weight room, Baldwin added 20 pounds this offseason. He also has been more vocal in practice.

Baldwin is not the only player tasked with replacing Martin, but he is the only one who will suit up in the first semester. Sophomore forward Jordan Tucker is the other. Tucker, who sat out last season due to NCAA transfer rules, becomes eligible at the perfect time: the Crossroads Classic in December.

Before transferring to Butler, Tucker was a consensus top-100 recruit. He committed to Duke, but played only 14 minutes and scored six points. So he transferred to Butler, where an opening at the starting four position seemed to sprout at the perfect time.

In many ways, Tucker is molded perfectly in the form of Martin — a knockdown shooter who can pummel you on the inside. Although, by the time he does become eligible, nine games will have been played and rotation locked. If the team goes on a winning streak, or if Sean McDermott becomes more than a perimeter shooter, it will be hard squeezing Tucker into the starting role he was looking for when he transferred to Butler.

If he does not garner minutes at the Crossroads Classic, the next three games could prove helpful. Those games are separated by 11 days and are an ideal time to shake the rustiness off against Presbyterian, UC-Irvine and Florida. Tucker’s talent is hard to deny, and he will find a role somewhere in the rotation. Whether he comes off the bench or can grab a spot as a starter remains up in the air.

Sophomore guard Aaron Thompson showed a positive trend of taking 14 3-pointers in the final 17 games — although he made just two. That total pales in comparison to his first 14 games, when he shot just one. If he continues the trend of taking more threes into the coming year, then Butler’s scoring attack will be diversified.

Because he plays most of his minutes alongside Baldwin, Jorgensen and McDermott, his role in the starting lineup does not necessitate shooting. But, it would help a team that is losing 33 percent of its 3-point output.

In Butler’s flow of offense last year, Martin scored, Baldwin passed and Wideman dunked. Out of the three, only Baldwin remains. Wideman will be hard to replace. While senior center Nate Fowler was one of the highest-percentage scorers last season, keep in mind the sample size was limited.

Joey Brunk, a former four-star recruit, should tackle some of the minutes in the wake of Wideman’s departure as well. He is quicker than Fowler, but unlike the latter, has yet to see crunch-time minutes. With Tucker out until second semester, Brunk will get his opportunity to prove his worth early.

Baldwin should replace Martin, but trying to solve who fills in as the secondary scoring option is a little more complicated. Redshirt senior guard Paul Jorgensen might be the easiest assumption.

A knockdown 3-point shooter, Jorgensen has also played point guard in high school and at George Washington. The biggest rebuttal to his case is that he has not been consistent — going through a rough patch in conference play last season. The secondary scoring role will need to be a consistent player who can step up against talented competition.

The next option would be McDermott, the redshirt junior. The forward is a 3-point specialist who is reminiscent of a stick-figure drawing of Martin — same height, but 25 to 30 pounds lighter.

Last season, McDermott played both forward positions, but the offense rarely orbited around him. This season, LaVall Jordan figures to utilize him in the same role, with more plays scribbled for him. Not the inconsistent shooter of Jorgensen, McDermott gravitates defenses toward his shooting ability, opening the court for his teammates. He averaged over seven points per game last season with 43.1 percent 3-point shooting.