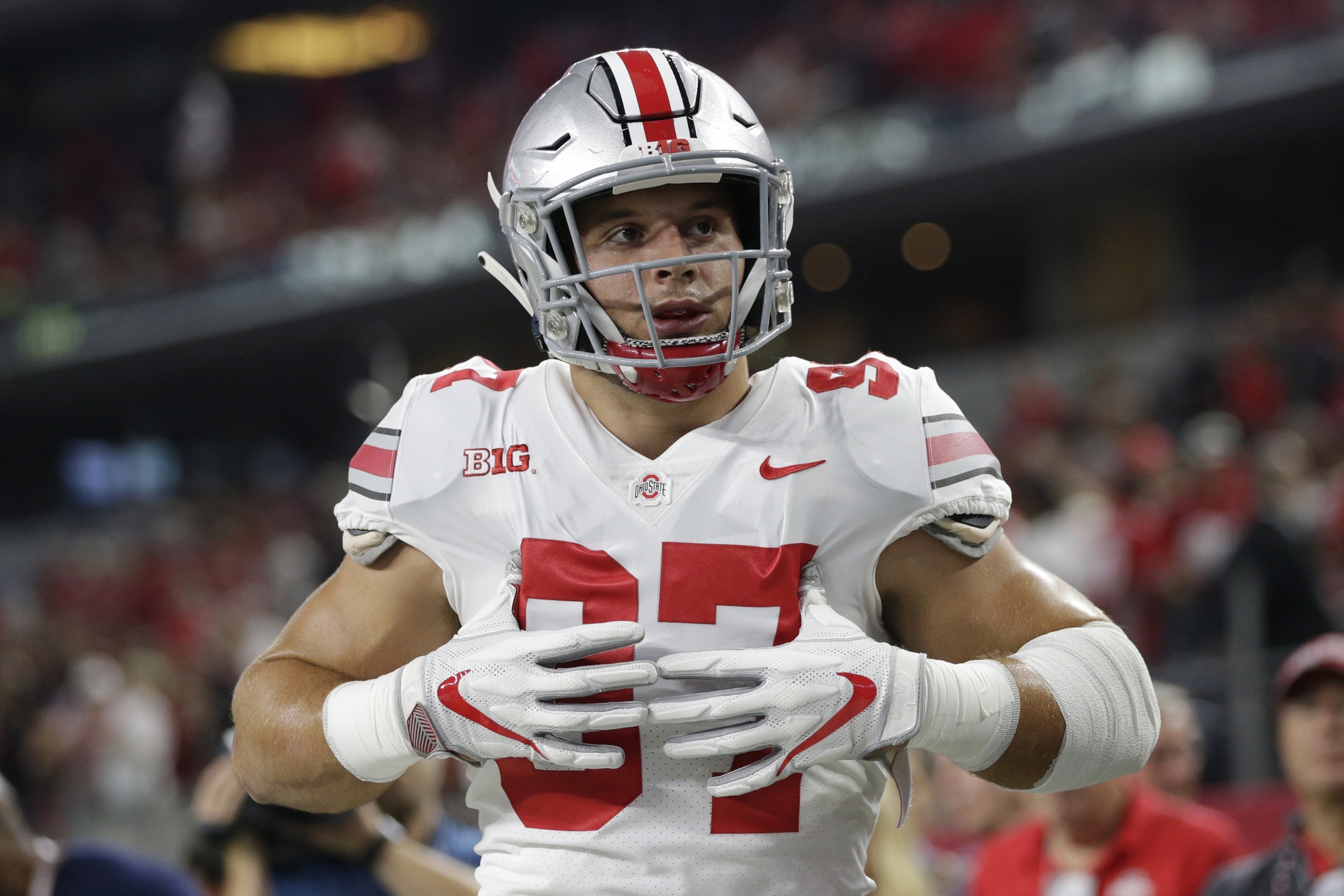 Nick Bosa announced he was leaving Ohio State to prepare for the NFL Draft. Photo by Tim Heitman/USA Today.

Nick Bosa was a communications major at Ohio State, but even he could do the math.

On Oct. 16, the university announced Bosa was withdrawing from school to recover from a core muscle injury and prepare for the 2019 NFL Draft. He’s a consensus top-five prospect and has a legitimate shot at going No. 1 overall.

With the injury expected to sideline him for the rest of the regular season, the best possible scenario had he stayed at Ohio State would have been Bosa returning for the College Football Playoff and leading the Buckeyes to a national championship.

Worst case scenario, Ohio State fails to make the playoffs, and he suffers another serious injury in a meaningless bowl game. That injury pushes him to the middle of the first round, and he’s never the same player again. Millions of dollars go down the drain.

Instead, Bosa decided to save his body when he can benefit from it financially. He evaluated his options and knew the risk was too great.

From Bosa’s perspective, winning a national title would be terrific. But being healthy enough for an NFL contract can set his family up for generations. He didn’t quit on his teammates; he exercised common sense.

The lack of criticism hurled at either of them speaks volumes about the way elite “student-athletes” are viewed. Nobody said anything because everyone knows Simmons and Bosa weren’t in college to get a degree.

Or, as former Buckeye quarterback Cardale Jones tweeted in 2012, “We ain’t come to play school.”

The $1.06 billion of revenue brought in by the NCAA in 2017 makes it incredibly difficult to believe it actually puts the “student” before the “athlete.” Players are tired of watching the NCAA prioritize its own economic interests ahead of their physical, educational and emotional well-being.

There’s no easy way to pay college athletes. It’s a complex issue with a mountain of questions that need to be answered to make it work.

Maybe Bosa stays at Ohio State if he’s receiving some sort of compensation besides a scholarship and stipend. But that’s not the point.

Bosa saw the inequality and had no problem solving it: personal health and future millions are greater than more physical damage and a potential national championship.

Based on the general reaction to Bosa’s departure, it’s clear most people have figured it out too.

Urban Meyer wasn’t mad about losing his best player. Sad sure, but not mad. He was directly affected and gets it.

“Nick Bosa, and [brother] Joey, the Bosa family. From day one they walked on this campus, they’re great people, they’ve done so much for us so we all love him to death and wish him well,” Meyer said at his weekly press conference.

Ohio State’s players understand. Fellow defensive lineman Chase Young tweeted his support of Bosa. Former teammate Sam Hubbard called him “one of the best teammates and competitors I’ve been around.”

One of the best teammates and competitors I’ve been around. Know this was a tough decision, but made the right one. Good luck bro🤙🏻 @nbsmallerbear https://t.co/GPVcaPGw2Y

It appears the NCAA is the only one who doesn’t get it.

The first step to solving a problem is admitting one exists. If the NCAA is serious about its players being “student-athletes,” it needs to recognize that the current system isn’t working. Bosa is just the most recent college athlete to realize how flawed things are.

We are at the point where elite college athletes like Bosa view their time in school as an investment in a future career, not a chance to further their education.

The NCAA has two choices. One, acknowledge the fact that college sports are a business. That means allowing players to profit off their likeness and letting them sign endorsement deals. Open up the floodgates and give players a piece of the NCAA’s billion-dollar pie.

Two, embrace the revolutionary concept that being in college is actually about getting an education. Don’t let players skate through with fake classes and hold coaches accountable when their teams aren’t cutting it academically. Stop playing midweek games that force players to miss at least a day of classes. Pretend like the education is actually more important than the sports.

There will be logistical and financial consequences, but that’s the price the NCAA has to pay for the system it created.

More and more players are going to sit out bowl games and leave school early until the NCAA steps in. Something has to give.

Let’s hope the NCAA can figure out the inequality before it’s too late.