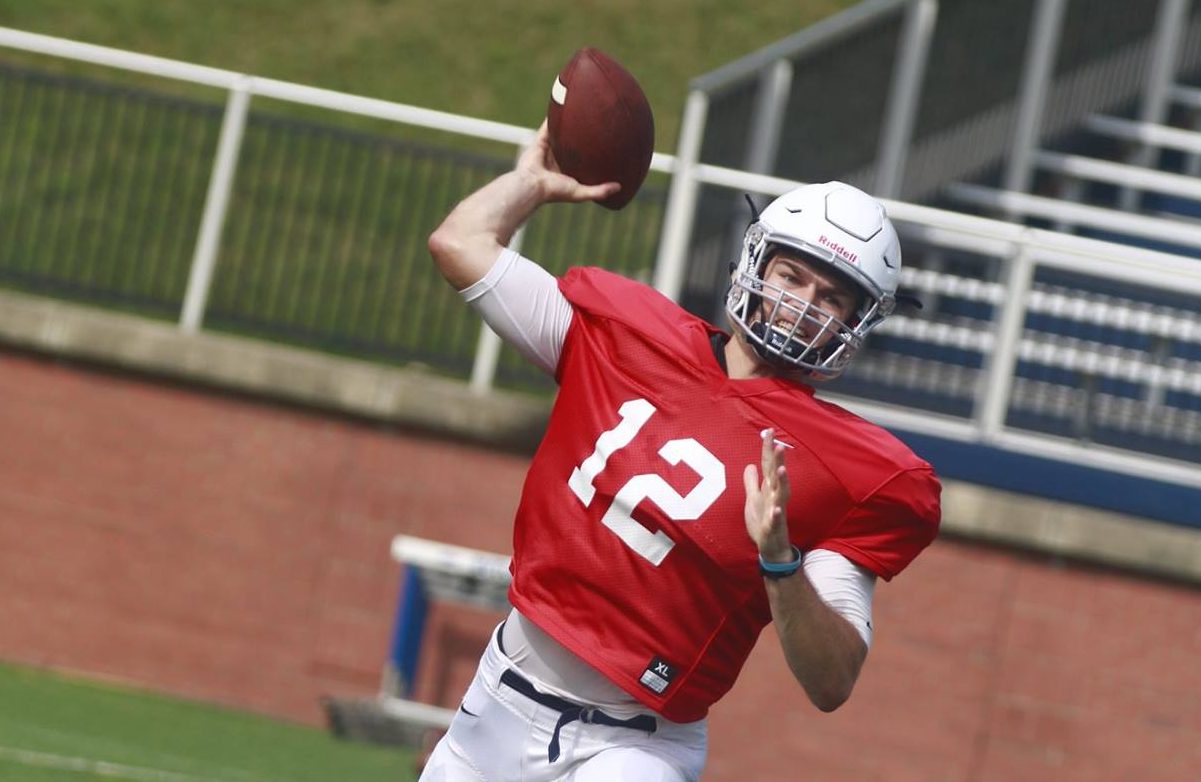 Will Marty makes a throw during practice. Marty and defensive back Dalton Rogers have formed a tight friendship and embraced their roles as leaders. Jimmy Lafakis/Collegian file photo.

Competition in practice is not something that is taken lightly by Marty, Rogers or the rest of Butler’s football team.

At a given practice, the level of care can be heard from the stands. When Marty nearly threw an interception, an “oh no” came from an unidentifiable player on the sideline, so dramatized it could’ve convinced someone that a train had come off of its tracks.

When another offensive player fumbles on the other side of the field, a stream of “no, no, no” was unleashed by a teammate.

In spite of the competitive environment that Marty and Rogers have been thrown into, the two have managed to maintain a relationship off the field that transcends football.

“We’ve got a respect for each other that I think is really special,” Marty said. “I think we can all feel it and you can’t fake it either.”

The two have grown closer by virtue of a common devotion to the program and everyone that it encompasses.

“I definitely think that we grew a lot closer this summer and this year just by how much we invested in not only each other but also the people downstairs in the locker room,” Rogers said. “And I think our relationship really came together just on the line of our commitment to leaving this place even better than when we came here.”

Rogers said that their relationship took off last season, Marty’s first as a starter, because of the passion that each has for the team.

Marty said that the daily grind towards a common goal has brought them together.

“We’ve both been through the same thing together as we’ve grown,” Marty said. “It’s been pretty special and it’s tough to explain if you’re not in a football locker room and you’re not devoting 40 hours a week to just play one [game] and then you’re doing that every single week of the year. So it takes a lot of work. And you really just learn to just love the people that learned to buy in and you know what they go through and they know what you go through.”

Marty’s and Rogers’ relationship has also been strengthened by a Bible study run by members of the team for years.

On Wednesday nights, a group of players can be found praying together and exchanging bible verses.

Sean Horan, a former linebacker, passed the tradition onto Marty, who said it provides a benefit on and off the field.

“You’ve got the physical side, you’ve got the mental side of football and school and then there really is that spiritual side as well,” Marty said.

Rogers, also part of the Bible study, said it has helped forge deeper connections with his teammates, Marty included.

“You could say your deepest darkest secrets, discussing through those things,” Rogers said. “And being able to make a real-life connection with somebody who might be going through the same thing is super special and I think is definitely something that can grow a connection between two people.”

That sort of connection is what’s most valuable to Marty about being part of the team.

There is a saying on the team that “iron sharpens iron.” Only by way of each player playing their absolute sharpest in practice can they in turn sharpen their teammates.

Having this sort of relationship allows both of them to bring a mutual respect to the practice field. This mutual respect allows each to bring their fully sharpened “iron” at each other without sacrificing respect.

Senior receiver Pace Temple preaches this ideology and expects his teammates to do the same.

“I think that you’re not going to get better unless you’re going your best,” Temple said. “Every game. We’re going as hard as we can, so you need to do that in practice.”

Temple said that Marty and Rogers adhering to this makes for better practices.

“They’re always constantly going at it, a little chatter back and forth,” he said. “But what I really think it brings out is their appreciation for each other, you know, they both know that guy across the ball is going to give his all in practice against me right now.”

Marty said their relationship impacts how he performs in practice.

“Dalton and I are so close that we have that bond, we have that brotherhood bonding us together that I’m going to go after him even harder just because I want to beat him that much more,” Marty said. “And he’s going do the exact same thing at the end of the day.”

Rogers said this bond allows them to help each other improve. If he can point out to Marty when he’s going to do certain things, Marty can prevent himself from telegraphing them in the future. The ability for each of them to gain perspective from the other side of the ball helps the team as a whole.

The ultimate goal for Rogers in practice has shifted from improving to helping others improve.

“I want to get better and I want to look good in practice, but at the same time, my main priority is to help Will and to help the offensive players because on Saturday when we line up, we’re all in blue or we’re all in white,” he said.

Temple said that you can easily see the transition when they step off the field.

“They’re great buddies, they’re always joking around with each other and having fun,” Temple said. “You don’t see what you see on the field in the locker room. It’s one of those things where right when they get to that tunnel, that competitiveness is out of the way.”

Will Marty and Dalton Rogers may only be on the same team 11 times a year, but they are teammates all year long.