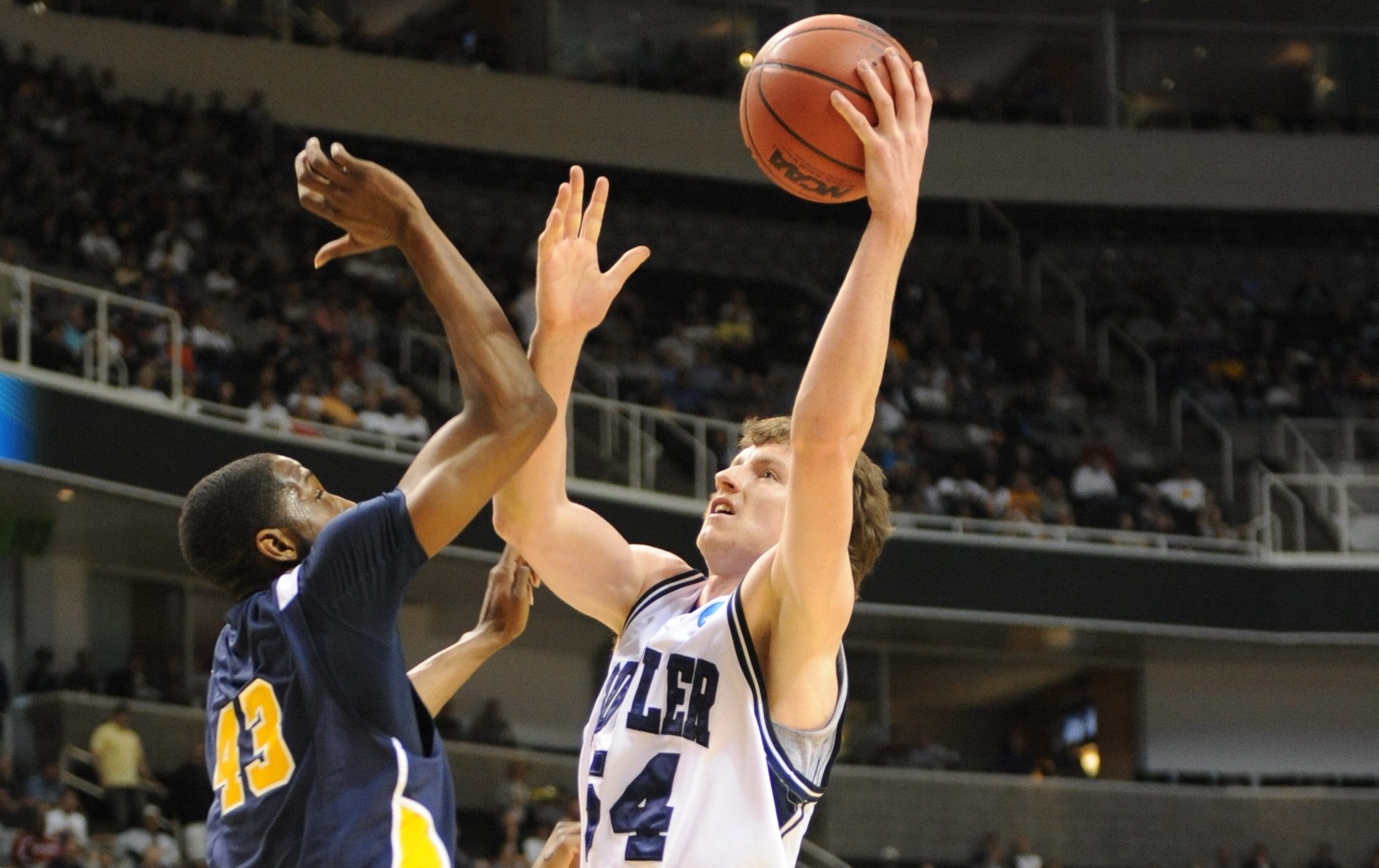 Matt Howard puts up a shot. Howard played in two national championship games during his four years as a Bulldog. Collegian file photo.

Matt Howard is finally comfortable. At his house in Connersville, Indiana, Howard is on his porch, reclining in a chair. His phone is tilting up, capturing a reflection of his stoic look. The neighborhood sounds are muffled, quiet — just the way Howard likes it.

Last season, Howard played for Hapoel Tel Aviv in Israel. In 2014, he received his first multiple-year contract from Strasbourg IG of the French LNB Pro A League.

Before embarking on a professional career, Howard played four years at Butler, which included two NCAA championship game appearances. Howard’s scrappy, win-at-all-cost, mentality inspired Bulldog fans. The Cinderella story gravitated him all the way to an interview with Charles Barkley on TNT. There, he was not exactly comfortable.

“It’s not interesting,” Howard says about fame. “It’s not really that interesting… you know I could go to the store, or go to dinner. There are some guys like that where they are going to be interrupted… I don’t know what level of money makes it worth that.”

Every July, Howard drops by a Butler fan party in Rushville. For all intents and purposes, he is the main attraction. The party rarely gets to host former star athletes. This July, a 60-year-old man hobbled over towards Howard.

“I felt so bad when you messed up your ankle,” Howard recalls the man saying.

“I kept thinking, what is he talking about?”

Then the dots connected. The superfan thought Matt Howard, scruffy beard and all, was actually Boston Celtics star Gordon Hayward. At the time, Hayward was still recovering from a devastating leg injury suffered in the first game of the NBA season.

Howard figured the fan wasn’t wearing his prescription glasses, which led to the confusion.

“Which is really bad for Gordon I think,” Howard jokes.

Like Hayward, Howard is battling through a leg injury, a stress fracture which stymied his summer. The stress fracture injury is a silver lining of sorts, opening up time for his wife and son. Now, he is back in his hometown, doing physical therapy one to two times a week to see if basketball is in the cards next year.

That’s a quick turnaround from last season, considering he practiced in Israel once a week for the game at the end of the week. The injury hindered his basketball career but welcomed serenity into his life.

While the injury was a silver lining for Howard, it inclined Hapoel Tel Aviv to let him walk after a year of Howard averaging 6.3 points and 4.1 rebounds.

Instead, they inked Jamal Shuler, an American guard, for their final non-Israeli spot. With the most free time he’s had in seven years, Howard is thinking about life after basketball.

Taking a charge means sacrificing your body for your team, something Howard did often at Butler. Part of Howard wants to sacrifice his playing career for his family. A jolt of another life follows.

Taking care of his son, Micah, is first and foremost. He just turned two.

“We’ve put [Micah] through a lot,” Howard says. “He’s flown more than I think a majority of people ever have.”

Having played basketball his whole life, Matt wants Micah to follow in his footsteps. Still, he supports him in everything he does, and “will get over it,” if his son doesn’t end up playing basketball.

Basketball is a family business, so it’s no secret or surprise Matt wants his son to be a ballplayer. Look no further than Howard’s brother, who is a basketball referee. He pokes fun at Howard every so often for the three charges he once took in a game. Every time he sees that referee on television, he brings him up to Howard.

That playful joy about basketball embodies the love coursing through the veins of the Howard family.

More than anything, Howard finds solace in his own skin. He loves spending time with his family, which is something that he only did for an estimated three and a half to four hours of the day last year.

His wife, Brittney, stayed home in Israel while Howard was playing. She took care of their son, whose development was speeding along.

“It’s not an easy life to go over there and be away from your family,” Howard says. “Especially when I’m traveling.”

In Europe, friends were hard to come by. Swift roster turnover barred players from forming relationships beyond business casual.

“I ran into some [players] where they didn’t want to get attached because most contracts are one year,” Howard says.

After seven years in a variety of cultures, adjustments became accepted.

“I learned how to adapt,” Howard says, “and be comfortable in being alone, being with fewer people around.”

But Howard’s first season was thrown into the flames of the ebbs and flow of European lifestyle and basketball. His team, Olympiakos, captured the Euroleague championship in 2011.

Except Howard didn’t experience the win. He was cut midway through the season. Not only that, he was cut off entirely.

And when you consider that NBA players can play for all of five seconds and still glean a shiny diamond-studded ring, European basketball seems like a fiery business in comparison. Howard was wary of the harsh reality, though, charred by the embers himself.

“When teams in Europe cut you off, you’re fully cut off,” Howard says. “They got nothing to do with you after that.”

He never truly expected a ring. He never was a part of any balloon-falling ceremony at the start of the new season and the ring certainly didn’t pop up at his doorstep.

Fluent in only English, Howard had a tough time getting used to a language barrier. The language difference was the line that Howard had a hard time crossing to form relationships.

Howard picked up on bits and pieces of French which teammates were able to understand. Although it was elementary-level French, he likened it to a 4 or 5-year-old’s.

As a result of the language barrier, Howard’s best friends in Europe were ironically from Indianapolis, based at an Eli Lilly location in Europe.

Adjustments were necessary outside the basketball court, too. Howard’s wife, Brittney, noticed the toll Howard’s injuries have taken on him, telling him he doesn’t move like he used to.

He didn’t bounce off the ground as smoothly for dunks and didn’t slide as quickly to guard smaller players, parts of his game that have deteriorated with age. Those realities led to thoughts of life beyond basketball.

“At the end of the day, I want to do stuff with my son and not be limping around,” Howard says.

Still, his love for the game is like a family picture: impossible to throw away. It harrows and lives on through memories that seem ever so present, yet exist in the past.

Those memories live on through fans who admired his ‘never give up’ attitude, like Zach Eaton, a junior at Butler University.

“He had the most grit, he wasn’t worried about being flashy,” Eaton says. “He was the ultimate team player and a player everyone looked up to. His legacy here, will always be one of the greats.”

His post-career could bounce a myriad of ways. Howard is at a crossroads, although he hints he’s at the tail-end of a decorated basketball career.

Howard has traversed four countries and made memories some couldn’t even dream of. A country buff, Howard spent substantial downtime checking out monuments.

His calling, as a three-time Academic All-American, is a post-career passion that he can pour his blood and guts out for, like taking a charge.

One would think coaching would be the perfect segway to more basketball. Not so fast. Howard never really gaged coaching as a viable career.

Keep in mind a world-class coach, Brad Stevens, is a phone call away. And while dialing a number and asking for a job from Stevens is feasible, it’s not a path Howard necessarily wants to wander down.

“I think it’s possible,” he says. “I wouldn’t ask him unless I was 100 percent sure that was something I was going to do.”

Howard’s father, Stan, didn’t have any insider information that would indicate Howard’s next step is coaching but perceives basketball is a hard thing to give up.

“I’ve never heard him express a desire to do that, but I wouldn’t be surprised if he stayed connected to the game somehow,” he says.

Coaching fosters considerable publicity, and it’s not all good.

The younger Howard pointed to Thad Matta, former Butler and Ohio State head basketball coach, as a cautionary tale of how quick your boss can turn on you even after 13 seasons of success. Matta, after all, was the winningest coach in Ohio State history, until two seasons out of the NCAA Tournament left him jobless.

Howard seems to prefer stability, which is what gravitates him to Merrill Lynch, a job he says is within the realm of possibility.

The Lacy School of Business requires 320 hours of internships and 2 internships, a program Howard went through in his four years here. He interned for Merrill Lynch and networked with a financial advisor, who he stayed in contact with.

“I am still talking to [the financial advisor] to see if that opportunity is going to work,” Howard says. “I think that’s where I’m at right now. I think it’s a transition summer.”

A transition summer which determines whether Howard will be carrying a suitcase or dribbling a basketball.

Stan offered the same sentiment, and says his son has a multitude of options.

“He’s thinking of staying here stateside, he has several opportunities, he just hasn’t narrowed it down,” Stan says.

Matt Howard rocks up from his chair and slides open the screen door, echoing noise throughout the neighborhood.

Right when the door creaks open, Micah shouts with joy, “Daddy, daddy, daddy!” The two year old is crawling around, smiling from ear-to-ear.

Playing with his son, Howard is in his element.