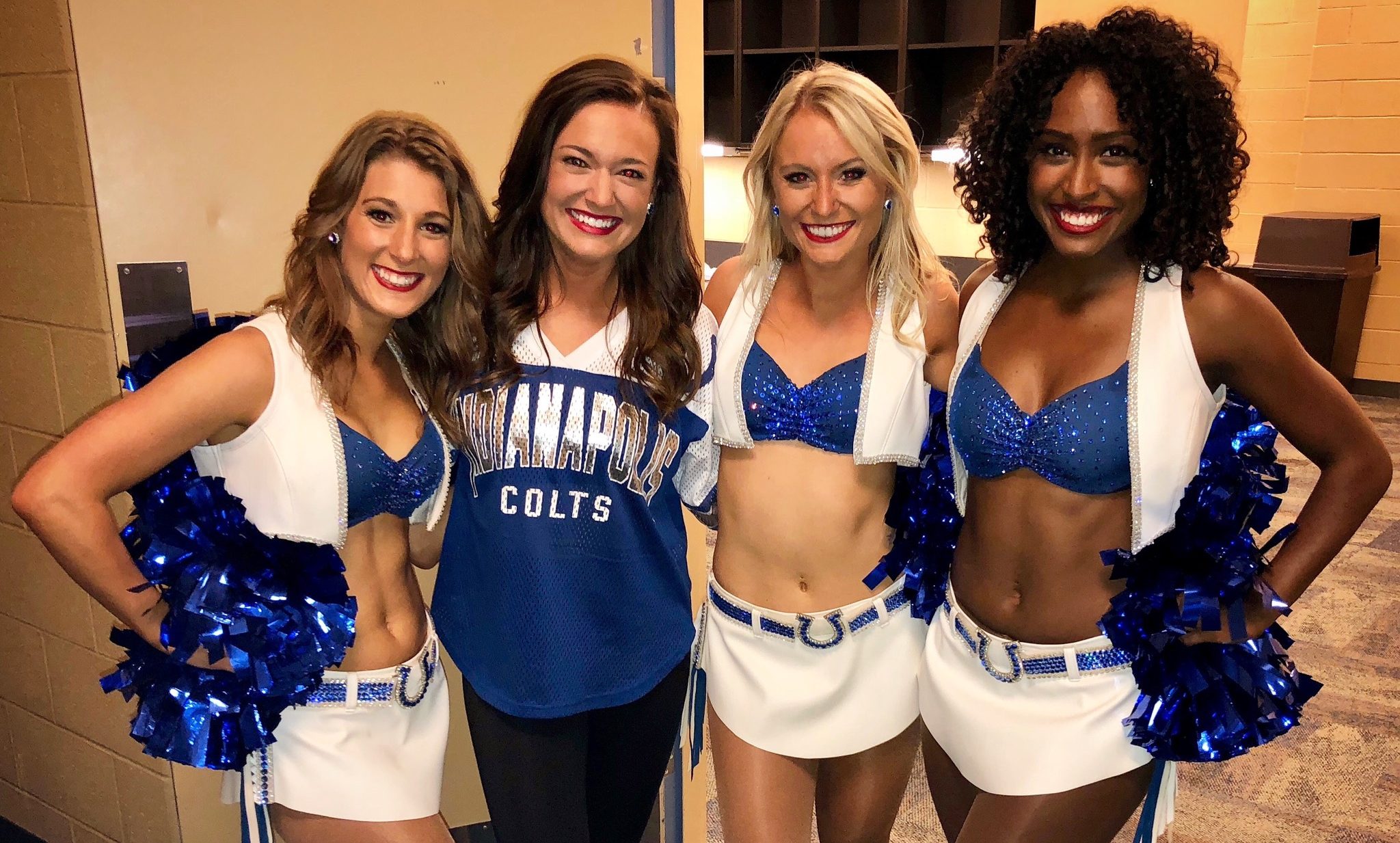 At the end of a practice during the 2016-2017 season, Butler University dance team’s coach Cassia Dean called her team over to present them with an offer.

“If you’re interested in tryouts for the Colts cheer team, stick around after practice,” Dean said.

Dean was a member of the Purdue dance team during her collegiate career. After she finished college, she went on to become a Colts cheerleader, where she was a member for four years and a team captain for two. Watching her Purdue teammates’ success with the Colts inspired Dean to tell her dance team athletes about the opportunity.

Alliyah Beeks, a senior at Butler, was part of the small group of dancers that stuck around to listen to Dean.

“I always knew Alliyah had huge potential in the sport,” Beeks said. “Her mom was an NFL cheerleader, so when Alliyah showed interest in wanting to be a member of the Colts cheer team, I was super excited. I knew she would excel at it.”

During tryouts, each dancer learns a routine they have to perform for a set of judges. At the end, there are 50 athletes left. This group goes through heavy assessment on their dance technique, interview skills and their knowledge of football. Once that concludes, 26 are left.

Beeks tried out for the team after she finished her senior year and has been a member of the team since. She says Butler not only had a great impact on her transition from collegiate to professional dance but also on her daily life.

As a member of the College of Education at Butler, Beeks was a human movement and health sciences major and believes the program benefited her in many ways.

“I took a ballroom dance class as one of my College of Education electives while at Butler,” Beeks said, letting out a small laugh. “I would’ve never taken something like that if it wasn’t a part of my major, and I absolutely loved it. I want to take adult ballroom dance classes once I’m done with the Colts. It’s a different area of dance than what I’m used to, but helps continue on my passion for dance.”

When it came to the athletic side of her transition from Butler to the Colts, Beeks touched on the different game day schedules. The Colts games are almost always scheduled for Sundays, making it easy to follow. Butler’s basketball games tend to vary week-to-week with different times and different days.

“Sometimes I’d have a class the night of a game,” Beeks said. “As a team, we would have to plan around who was available that night. It got difficult sometimes.”

This past year, two more Butler grads joined Beeks as members of the Colts cheer team. When Dean gave the same speech to her team the following year, Sarah Sharpe and Caroline Kuremsky were among the group.

“I love a good planner,” Sharpe said. “And it’s much easier to balance your time once you get the hang of it.”

Sharpe learned a lot from her undergraduate years at Butler, but her biggest takeaway was to maintain doing what you love. Learning to balance her time between her undergraduate schooling and dancing helped her make the transition to the graduate program and the Colts cheer team.

The Colts cheer team practices twice a week, typically for four hours at a time. Eight-plus hours of practice a week and devoting weekends to games adds up pretty quick.

The Colts practice schedules are not that much different than those at Butler. The only big difference is the time commitment to game days. Similar to the dance team, the Colts cheer team runs through all their routines at practice to make them perfect.

“Sarah was gung-ho for the idea from the moment I mentioned it to her,” Dean said. “I’m not surprised she’s doing so well with managing her time. She absolutely loves it.”

Caroline Kuremsky has a different story about her Colts cheerleading beginning. She is currently balancing her life between teaching fourth grade and dancing with the Colts. Although Kuremsky could not be reached for the story, Dean was able to speak about her former dancer’s decision to be a professional cheerleader.

Dean said Kuremsky was a bit nervous about trying out for the team. She was unsure if she could balance her time between being a teacher and a professional dancer, but Dean stepped in and gave her a push in the right direction.

“I was also a teacher, so I understood why she was having trouble figuring out what she wanted to do,” Dean said. “In the end, she went through with the cheer-teacher duo and hasn’t looked back since.”

Dean took a lot of the information she learned from being a Colts cheerleader and applied it to her coaching position at Butler.

“Butler is a smaller school, but dancing at Hinkle is a big deal,” Dean said. “These women live up to the high standards of dancing at a place that iconic.”

Beeks said she hopes to inspire others to pursue professional careers in sports in the same way her mother inspired her to become an NFL cheerleader.

“Our target audience with the Colts cheer team is kids,” Beeks said. “I learned a lot from Butler’s student teaching program about entertaining and teaching kids. Hopefully we inspire them to continue what we started here.”