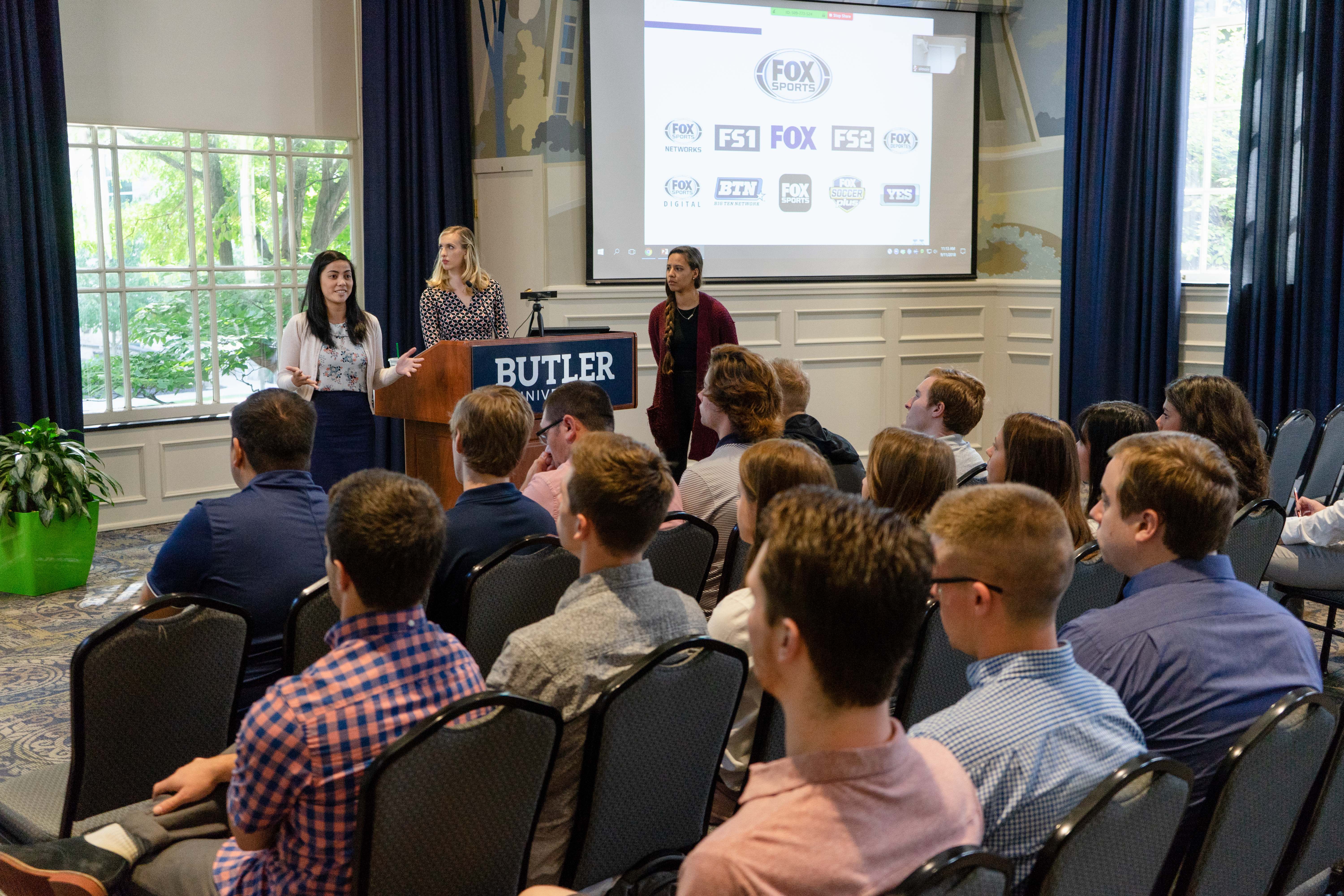 Inside Robertson Hall, the Johnson Room’s walls are adorned with familiar campus imagery: A mural of Hinkle Fieldhouse at the front, the Holcomb Observatory to one side, and Atherton Union opposite it prevents anyone in the room from forgetting they’re at Butler.

The students gathered in the room on this day, however, were there to discuss something that extends beyond the confines of Butler’s campus.

On Sept. 11, representatives from Fox Sports stood at the front of the Johnson Room in Robertson Hall, engaging with students.

These students, enrolled in the Fox Sports Practicum class, will be working with Fox to create a marketing campaign for the 2019 Women’s World Cup.

Approximately 40 universities participate in the program called Fox Sports University. Each are assigned a different topic or event to focus on. Taught by professor Ryan Rogers, this is the first year Butler has offered the course.

They were looking for universities that were both academically and athletically prestigious. They also work closely with the Big East Conference, of which Butler is a member. Both of these factors played a part in getting chosen.

Asercion said that Fox Sports is committed to education and giving students opportunities because they were once in their position.

“A lot of our employees and executives wouldn’t be here today without the education that we have and we know how important it is to go to college and getting experience to network and meet people,” Asercion said.

The class has already started researching different aspects of past World Cups, pouring over viewership trends from past World Cups and determining why people might or might not tune in. The class is also heavily discussion-based.

“We all like each other and we all want this for each other, and we can’t do it without each other. And that’s a fact,” said Chelsea Groves, a junior sports media major and student in the class. “And we have a great person leading this class. But, at the same time, it’s so student-run and [that’s] the beauty of it.”

What sets this class apart from a more traditional course is how experiential it is.

Groves said one of the reasons that the class is alluring is simply the Fox Sports name.

“Just the word ‘Fox’ stood out to me so much and I immediately thought of that as real-world TV experience and I just knew that they’d be incorporated in that directly and that is something that stood out to me and that grabbed my attention immediately,” Groves said.

The entire class is one team, all working together towards a common goal. Within that team, they are broken into smaller groups.

If Fox Sports chooses to execute ideas inspired by the class, they plan to include the students in the activation process.

Jacob Marcheschi, a junior sports media major enrolled in the class, said he thinks they have to do even better than what they think that they’re capable of.

“There’s that added pressure — that added incentive as well to make it 100 percent great and then add that extra 10, 20, 50 percent to… put it over the top and make sure that it’s the best thing you can do,” Marcheschi said.

Marcheschi didn’t start the class with much previous knowledge of international women’s soccer, but said he thinks the challenge will make for a better experience.

“It’s going to be good to give us that experience and make us realize that it’s not always going to be the Super Bowl or the World Series or the NBA Finals that we’re working on,” he said. “It could be something completely outside of our comfort zone.”

Groves said she thinks the course will be a challenge, but that is what excites her.

“Our eyes are big every single day with excitement because we want and like the challenge and we’re up for it,” she said.

As the 16 students in the room were surrounded by an abundance of Butler images, they were reminded to dream bigger than the university.