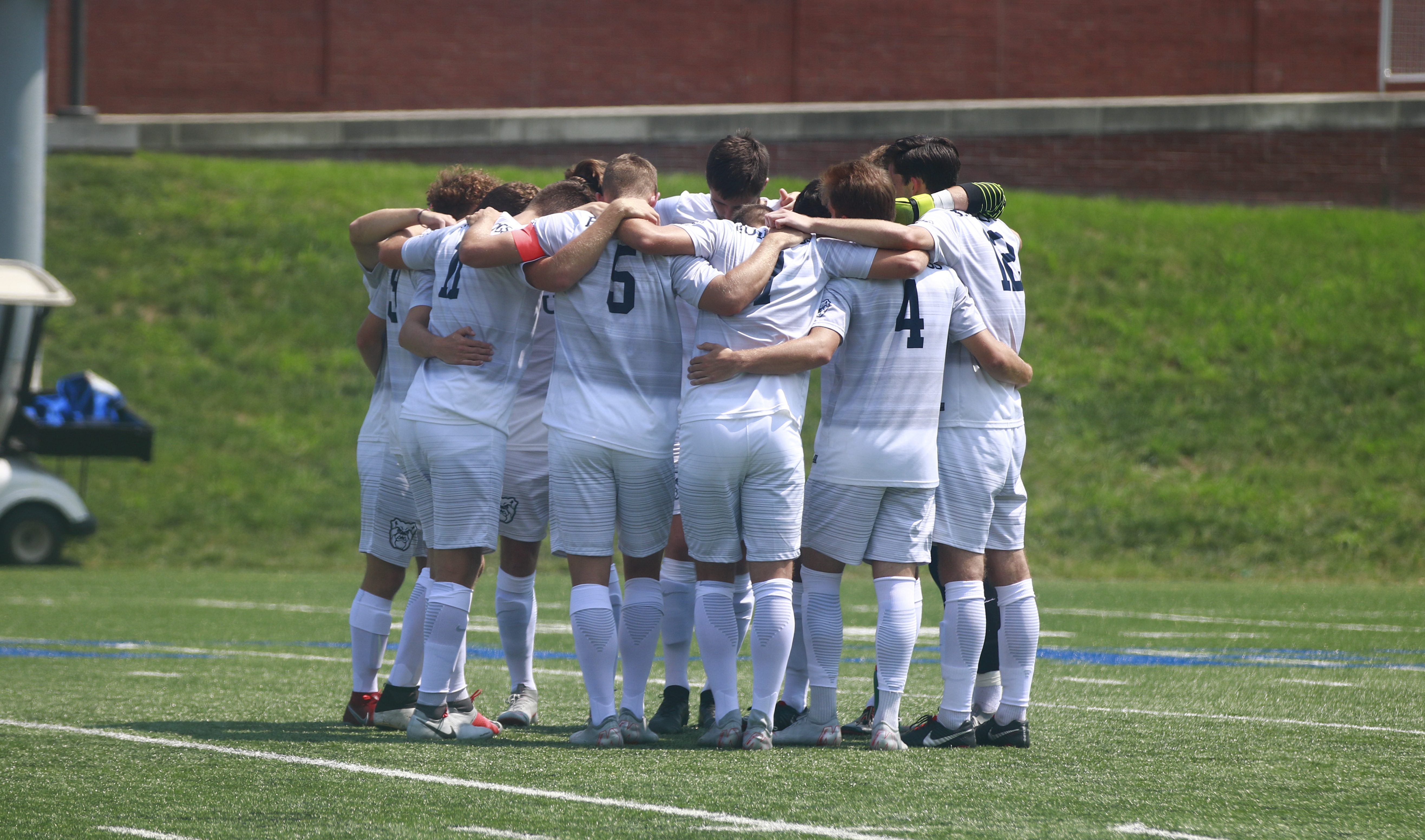 The Butler men’s soccer team huddles up before an exhibition game against the University of Charleston. The team will travel to No. 16 Western Michigan on Aug. 30 for their next game. Collegian file photo.

After a trip to the Sweet 16 in last year’s NCAA Tournament, the Butler men’s soccer team heads into the 2018 season as the reigning Big East regular season champions.

An array of young talent coupled with veteran leadership and led by head coach Paul Snape, make up the Bulldog roster that was ranked No. 9 in the preseason United Soccer Coaches poll. They were picked to finish second in the Big East Conference this season.

Seniors Jared Timmer and Joe Moulden were named to the All-Big East first team along with junior forward Brandon Guhl. Guhl was also named the preseason Big East Offensive Player of the Year and is on the watchlist for the MAC Hermann Trophy, awarded to the nation’s top collegiate soccer player.

Joining a seasoned, veteran core is a highly regarded group of incoming freshman. Nine is clearly the official number of this version of Butler men’s soccer. This class of nine freshman was the ninth ranked recruiting class for 2018 and is a big reason why this team is ranked ninth heading into the season.

“The key is to be able to work to fuse these kind of talents, mentalities and perspectives all together as well,” Snape said.

After Butler’s opening contest at No. 4 Akron, it is clear the freshmen will make a big impact this season.

Louie Bulger, originally from Tokyo, scored the team’s first goal of the season as he started alongside four other freshman against the Zips. Accompanying him in the lineup were Jack Haywood, Eric Conerty and Gabriel Gjergji.

This young group makes the future look bright for the men’s soccer program, and Snape acknowledged those possibilities, but the ninth-year head coach has a different focus for his new players.

“I don’t want them to think it’s about three years or four years from now,” Snape said. “We have to live in the present moment. It’s really important that we are focused on right now because if you don’t have a good season right now there is no guarantee you’ll have a good one next year. We are really excited about this freshman class, but I’ve got to make sure it’s about right here, right now.”

Gjergji, from Vicenza, Italy, played his high school soccer at Montverde Academy in Florida. He started in goal for the Bulldogs and seems to be the replacement for last year’s Big East Goalkeeper of the Year, Eric Dick. Dick, who is now playing for Major League Soccer’s Sporting Kansas City, was a United Soccer Coaches first-team All-American last season.

Goalkeeper is not the only vacancy left from the 2017 roster. The Bulldogs lost senior midfielder and captain Eric Leonard. Leonard was a major part of Butler’s success despite season-ending injuries to Timmer and Marco Charalambous.

Specifically, Leonard and Dick created a legacy, according to Snape. Not only did they leave their mark on Butler soccer because of their talents, but also because of their leadership and will to win.

“Eric [Dick] was one of the hardest working players in all of college soccer,” Snape said. “And Eric’s [Leonard] will to win was incredible. We lost that incredible desire and determination.”

Isaac Galliford and Lewis Suddick are also no longer with the Bulldogs after choosing to return to England. The duo was, in many ways, a double headed monster that led the offensive attack along with Guhl. The European duo combined for nine goals and 15 assists in 2017. The three of them were responsible for 22 of Butler’s 31 goals last season.

In 2016, the last time he played a complete season, Timmer led the Big East with nine assists. Filling the playmaking shoes of Leonard, Galliford and Suddick is a tall task, but a playmaker of Timmer’s caliber in the middle of the field is a plus for Snape.

Talent isn’t the question for Butler this year. The talent is recognized both on the conference level and the national level. But after the early season loss to Drake University, Snape said he wants to work on the intangibles that are crucial for a highly ranked team.

“We have to be able to deal with adversity,” Snape said. “Even if we are playing really well, there is going to be adversity out there on the field. We didn’t do that last night [against Drake]. That’s my job as a leader to prepare our boys for adversity and right now we’ve got a lot to improve in that area.”

The Bulldogs schedule does not get easier going forward as they head to Kalamazoo, Michigan, to face top-25 opponent Western Michigan on Aug. 30.

“The message going forward is that these polls mean nothing,” Snape said. “It’s about winning games. We get ranked because we win games, you don’t win games because you’re ranked.”