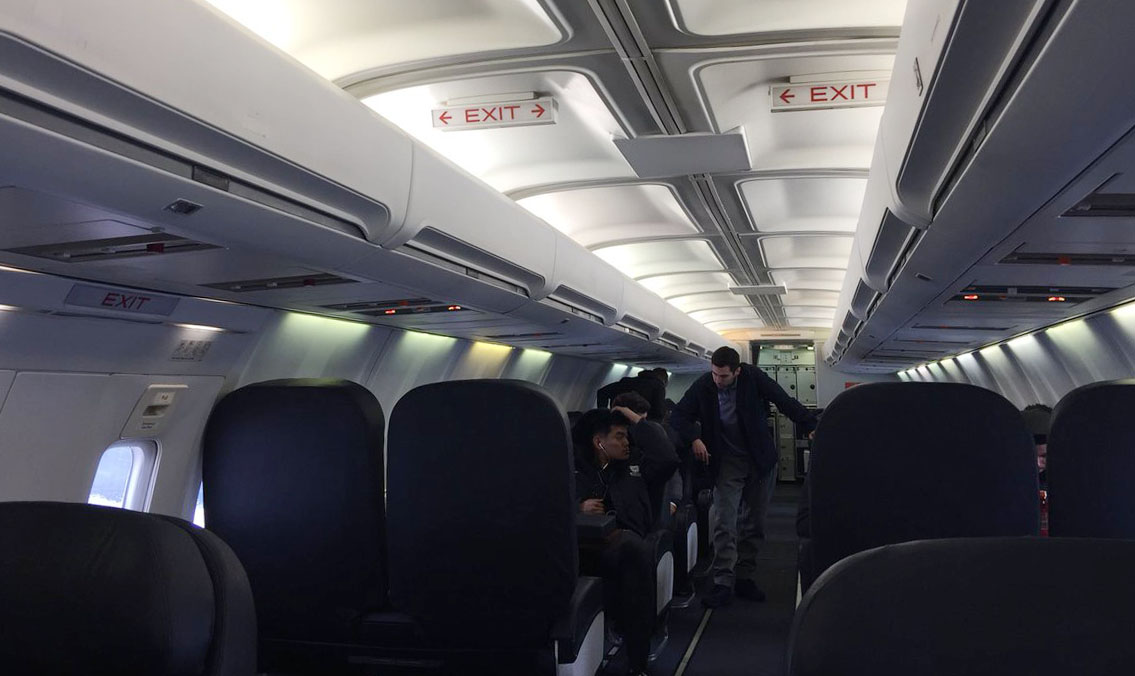 Between finding transportation for 70-plus football players and flights forced to make emergency landings, there is a lot that goes into coordinating and scheduling games for Butler athletic teams. However, it isn’t uncommon for travel plans to get sidetracked.

Flights get rescheduled, classes are missed, and sometimes, teams even leave in the middle of a game to catch their flight.

Primed to defeat No. 6 Texas A&M Aggies, the Butler softball team was dominant during the Texas A&M Invitational earlier in February. With a nine-run lead in the first inning, Butler had a good chance at victory. The Bulldogs, however, were unable to secure a win over their top-10 nationally ranked opponent.

Butler didn’t collapse on the field, but instead were rushed off in the bottom of the third inning.

With a flight to catch, the Bulldogs had no choice but to leave their 9-6 lead behind, calling the game a no-decision. Stats from the game would be erased, and to the casual observer, the game seemingly would have never happened.

“They try to make the flights as late as possible in case stuff like that happens but not always can it be like that,” senior infielder Alyssa Lach said. “So, you kind of just have to see that we’re an outdoor sport and we’re used to it.”

While ineffective in this case, precautions among Butler’s sports teams are generally taken to avoid travel issues.

“We always monitor that, and that’s for any team — even conference teams coming in here,” head coach Scott Hall said. “How long does it take to get to the airport if we have a rain delay? Here’s when we have to be done. There’s no bickering about it. That’s a lot of money to miss a plane.”

Five years ago, Butler’s longest commute as a member of the Midwest-based Horizon League was almost 400 miles north to Green Bay. Now as part of the Big East conference, coaches accommodate for trips to schools like Seton Hall and Providence, both of which are located on the East coast.

“The difference now is TV dictates so much of our games and our timing,” Brandon Crone, coordinator of men’s basketball operations, said. “We don’t know ahead of time when we’re playing until basically the season hits.”

When preparing to travel to New York for the 2018 Big East Tournament, the men’s basketball team ran into issues.

They received an email from the team’s transportation company which stated their original flight was in jeopardy due to an incoming storm.

The plan was to fly on a Wednesday to avoid missing classes, Crone said. Instead, Crone spent between 7 a.m. and 12 p.m. on Tuesday rearranging travel plans so the team could leave Indianapolis that night.

Crone is in charge of scheduling for the team and coordinated the time change with everyone involved. This included head coach LaVall Jordan, two associate athletic directors, the bus and charter companies, and the hotel.

“We pulled the trigger and got it done,” Crone said. “Told the people to start packing.”

While this issue was resolved before the plane left the ground, the team has not been so lucky in the past. Last season the Bulldogs’ plane lost cabin pressure returning home from St. John’s.

“We were at about 35,000 feet, and it went pitch black, cold everywhere, and the masks came down, and we went into a straight descent,” Crone said. “Many of our players and staff thought the plane was crashing.”

The plane made an emergency landing in Pittsburgh and the team stayed overnight in a hotel. They took a bus back to Indianapolis the next day.

Oddities aside, teams at Butler have the same goals in mind when traveling: making sure there’s enough time for the game and how much class athletes are missing.

“The number one factor is how to miss the least amount of class,” Crone said. “A lot of times we try to get where you’re practicing on campus, so you’re not having to fly to a place earlier.”

For football, missing the least amount of classes means sometimes leaving around 3 a.m. the morning before game day.

Each player is responsible for carrying his own uniform and anything else they might need. So, getting 70-plus people through security is not easy.

“With that big of a group of people, it just doesn’t move fast,” Joe Cheshire, the team’s defensive coordinator, said.

The team has to submit a list of everyone flying six months in advance, but the list is subject to change. The team is responsible for paying the fees this incurs.

“We’ve been real close to a point where we’re running off the field, shower as fast as possible, get on the bus and roll.” Cheshire said.

Other teams, like Butler volleyball, have an entirely different set of challenges.

Volleyball uses a travel format in which the Big East teams work together to travel to and from competitions based on their geographic location.

The Big East pairs together schools that are closest to each other geographically. This is to shorten travel times and to make sure teams are only traveling to an area once in a season instead of multiple times. In this format, one pairing will travel to play another pairing within a day or two.

Paired with Xavier, head coach Sharon Clark said the most difficult partnership is Creighton and Providence.

“The only really difficult one for us is Creighton and Providence because that’s a lot of flights to fly from here to Providence where there’s no direct from Providence to Creighton,” Clark said. “So, that’s six segments that we have to fly just in one weekend.”

Aside from this pairing, the team typically flies to the first location, buses to the next, and flies back to Butler from the second location.

“It’s kind of hard having to miss like a class or two on Friday but other than that, the bus trips are pretty easy,” senior middle blocker Bri Lilly said.

Scheduling competitions efficiently is a difficulty the team often faces.

The volleyball team is also no stranger to rushed flights. During their last season, the team’s 5 p.m. flight was changed to a 10 a.m. flight for one of their games.

From dropping everything in the middle of a softball game to catch a flight, to rushing over 70 football players through airport security, there are countless hurdles that teams encounter.

“You’re doing it all on the fly,” Crone said. “And trying to make the best decision for everybody.”