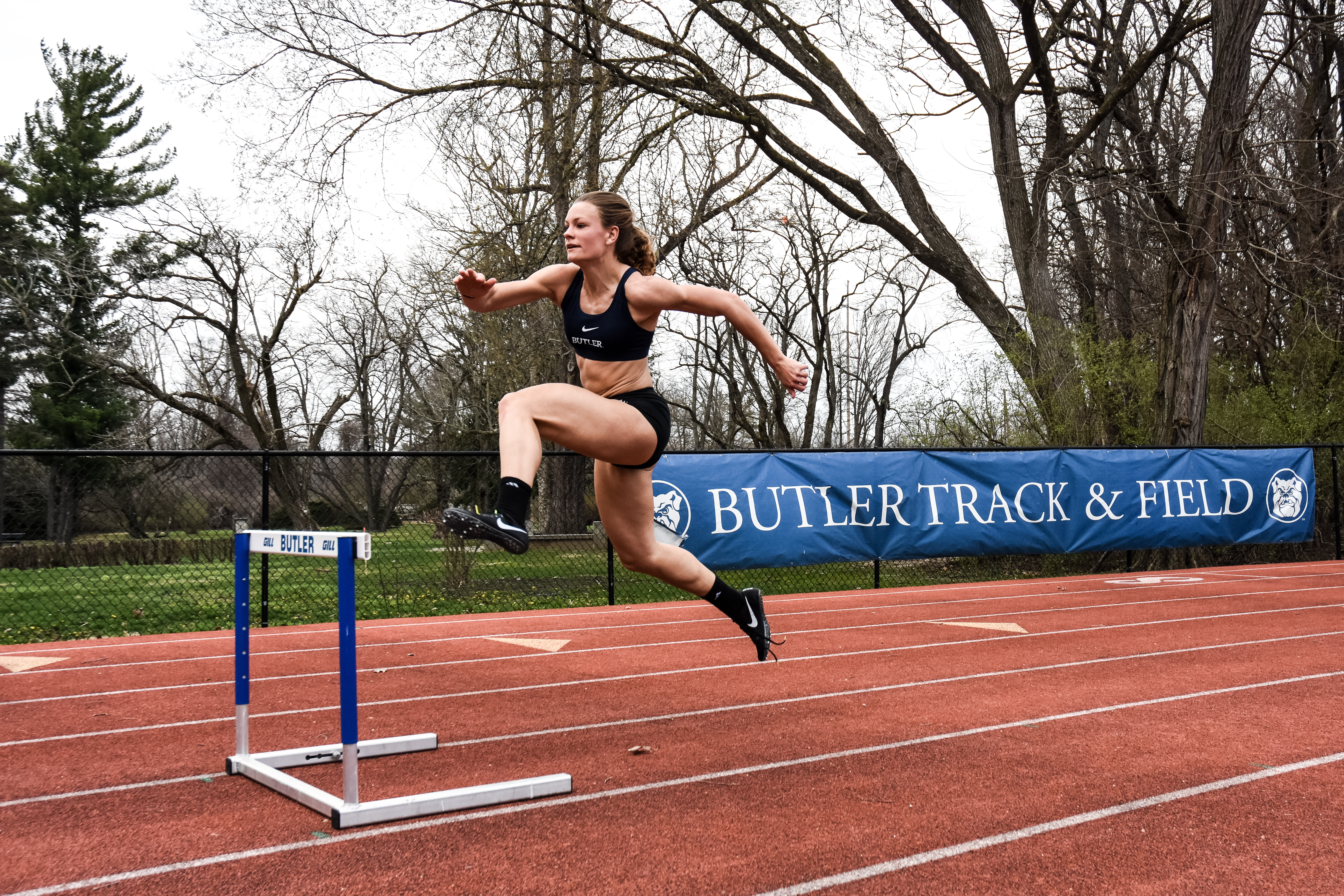 Allie Vogeler jumps over a hurdle during practice. Vogeler holds the school record for the 400-meter hurdles. Photo by Peter Larson.

Ask any college track athlete what their least favorite event is. Sprinters will say it is the 400 meters. Distance runners will say the same. Too long for sprinters and too short for distance runners, the 400-meter race is one of the most physically and mentally challenging events in track and field.

Now try adding 10 hurdles spaced 35 meters apart to the 400 meters, and you have an event that almost no one wants to run.

Butler junior Allie Vogeler runs 400-meter hurdles willingly, and she is breaking records while doing it. This year, she has not only broken her own records, but also the school’s — holding the program’s fastest times in the 400-meter hurdles and 200-meter sprint.

“When you see somebody competing at a high level and running well in a championship event, that’s just the tip of the iceberg that comes out of the water,” Butler head coach Matt Roe said. “What’s really underneath is 98 percent of the work, which most people don’t see. What we see is kind of the process, and her process is just outstanding.”

The 98 percent that people are not seeing is an injury Vogeler has been battling since freshman year.

Unsure what the injury is, assistant coach Robby Burns and Vogeler define it as a muscular imbalance. Though the injury has lingered throughout her collegiate career, it has been most bothersome as of recent.

“The 400-meter hurdles is such a brutal event,” Vogeler said. “It’s a lot of impact on your feet, like landing. It’s just a gritty race to sprint for 400 meters and still clear hurdles.”

It’s just another challenge, and Vogeler does not even talk about her injury — Burns was the one who brought it up first.

“She wants to be at every practice and wants to do every single rep and wants to do as much as everybody else on the team plus some,” Burns said. “She had to be patient with it and trust that her body would figure itself out and right the imbalance.”

The imbalance does not agree with her work ethic and it has resulted in frustrating days, practices and races.

Vogeler refuses to take practice time for granted. So, being patient is not something that comes easily.

“There’s no magical moment necessarily in our sport,” Roe said. “It’s really a series of moments and she’s always ready and always prepared. So, when there is a big moment, she’s ready because she treats all the little moments like they’re big moments.”

Vogeler capitalizing on practice time is all due to her love for the challenge. The little moments are part of the uphill climb, and she is determined to reach the top.

“There’s always something else to look forward to in the next hurdle, the next barrier to finish and I really like the endurance race,” Vogeler said. “I just like to challenge myself. I’m always here for the grind. I love to have something that I can just sink my teeth into and push myself to do better.”

She is never satisfied, even after running a school record and lifetime best in the Raleigh Relays at the end of March. After her race, Vogeler texted Burns saying she “had more in the tank.”

“She’s very tedious with how she wants to approach a race like the 400-meter hurdles,” Burns said. “She wants to know exactly how the race is going to unfold before it unfolds. That could be a blessing or a curse, certainly, but at the end of the day she gets in the blocks and she’s determined to beat everybody in front of her.”

Burns took her aside and they had a conversation to distract her from the championship.

“I told her she was going to kill it and she was ready to go,” Burns said.

That’s exactly what she did — Vogeler became a Big East 400-meter hurdle champion.

“The biggest barrier for me is learning what amount of pain you’re comfortable with,” Vogeler said. “And how much you can really push yourself under pressure.”