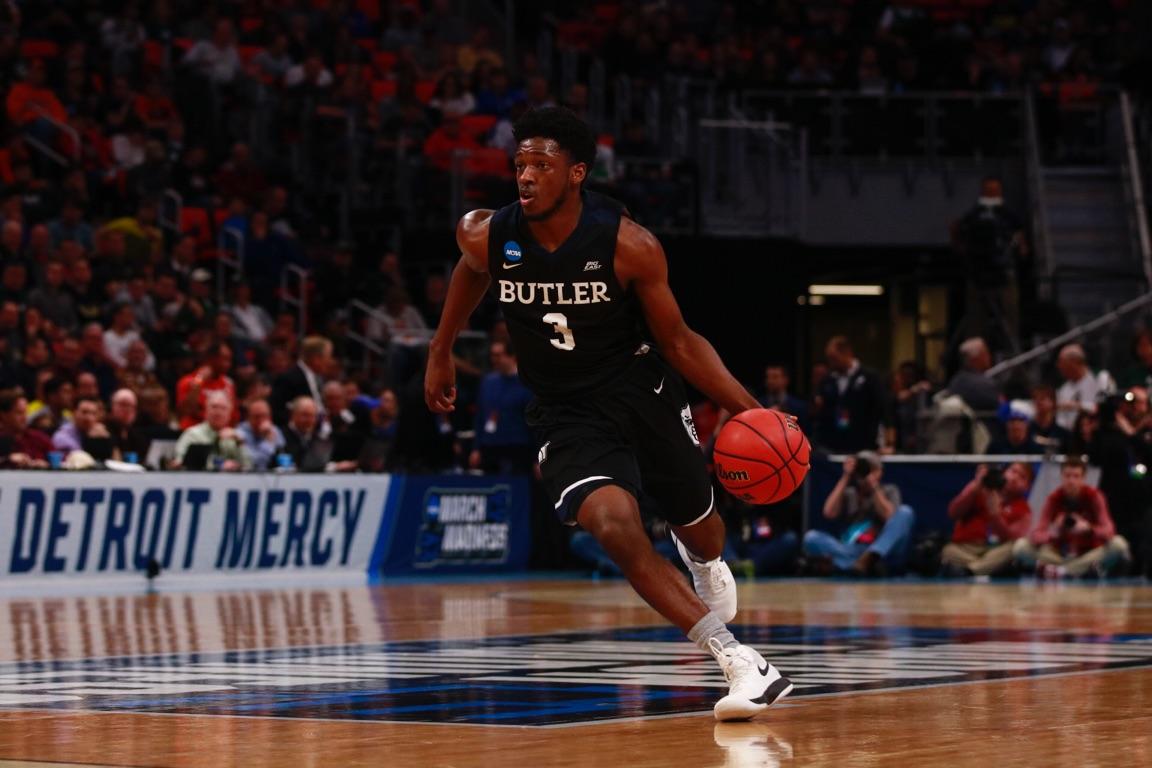 The Butler men’s basketball team is moving on in the NCAA Tournament thanks to a 79-62 victory over the Arkansas Razorbacks. Butler held a 21-2 lead before the Razorbacks rallied to get back in the game. The Bulldogs made enough plays down the stretch to hold onto their lead and won an NCAA Tournament game for the fourth season in a row. Here are three takeaways from a very promising performance.

1. That was pretty… until it turned gritty.

There was nothing gritty about the start of this game. Butler’s 21-2 run to open proceedings was simply pretty. The Bulldogs’ first five baskets were all scored by different players and seven of the first 10 were assisted on.  They didn’t commit a foul for almost 7 minutes. On the defensive end, Arkansas only converted on one of its first 11 shots. It was the perfect start, but it didn’t last for long. A 10-0 Razorback spurt followed by another 16-0 run completely erased Butler’s advantage and gave Arkansas a brief lead with just under four minutes left before halftime.

“We knew it was going to be a 40-minute game,” coach LaVall Jordan said. “We got up big early and we knew they had a run in them and we had to hold on and get it back. But guys had a really good demeanor about them and we made good decisions late when it mattered.”

Squandering a 19-point lead is obviously concerning, but the Razorbacks are too good offensively to shut down for extended periods of time. Butler scored 11 of the final 13 points in the first half to take a five-point lead into the break. They maintained control in the second half and were the better team over 40 minutes. Things could’ve unraveled after Araknsas’ runs, but the Bulldogs kept their composure and grinded out the win. They found a way to get it done and that’s all that matters in the end.

2. The 3-point line made the difference in this game.

Butler held Arkansas, who shoots over 40 percent from deep as a team, without a single 3-point make for the opening 8:38 of this contest. By the time the Razorbacks connected from beyond the arc, the Bulldogs had already made four threes of their own. Arkansas was 3-for-10 on 3-pointers in the first half and 4-of-18 overall. Butler, on the other hand, made six threes in the opening 20 minutes and shot 42 percent from deep for the game.

“We talked about it in pregame, just run them off the line and try to make them make tough twos,” Kelan Martin said. “And I think we did a great job of that. They missed some open shots as well.”

For the Bulldogs to win this game, they needed to prevent the 3-point line from being a massive advantage for the Razorbacks. Butler managed to turn it into a major positive for them, which hasn’t happened often this season. There were some open looks, but LaVall Jordan’s team did a really good job defending the arc overall. Their efficiency from three on offense was an added bonus. Winning the 3-point line is crucial to a deep run in March Madness for the Bulldogs.

3. Is the second time the charm?

As a reward for their victory over the Razorbacks, Butler gets another showdown with the Purdue Boilermakers in the Round of 32. In their matchup in December, Purdue grabbed an 82-67 victory that wasn’t as close as the score makes it seem. The Bulldogs committed 17 turnovers and shot 11 percent from three in the first half of that game. Major adjustments need to be made if Butler is going to pull off this upset.

However, the Boilermakers will be missing a massive piece in center Isaac Haas, who is done for the tournament with a fractured elbow. Purdue is a completely different team without Haas and figures to be much more perimeter-oriented as a result of his injury. Butler only knocks off Purdue if they take advantage of Haas’ absence inside and defend the perimeter like they did against Arkansas. Even without Haas, the Boilermakers are an outstanding team. This will be a massive task, but it did just get a great deal easier.

“I think our mentality doesn’t change,” Jordan said about his team’s next opponent. “It’s not like they’re going to play four guys. They have other players that are really good. We’ve got to be prepared for them.”