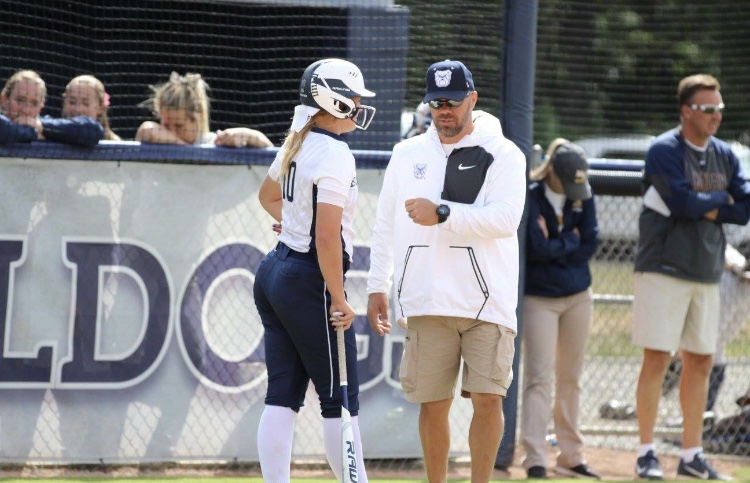 Maddie Moore meets with coach Scott Hall before going to the plate. Moore is in her first season as a Butler softball player. Photo courtesy of Maddie Moore.

Maddie Moore didn’t know exactly what college was. Most fourth-graders don’t. But she knew college softball when she saw it. Sitting next to her dad in the bleachers, she could see the players and the contrasting blue and white of the Butler uniforms. She could hear the crack of the bat and the cheers from the dugout.

“It was the chemistry and the atmosphere,” Moore said. “I was so blown away by all the older girls.”

She also noticed the Butler coaches didn’t behave exactly as she had expected.

“When I was little I [thought], ‘Oh, they probably yell at them all the time,’” Moore said. “But after I saw the interactions they had [with] their players, I remember [thinking], ‘Oh my gosh, they seem really nice. They seem like they care about you a lot.’”

After that game, the Noblesville native returned home. She pulled out her journal she wrote in every day, and jotted down two simple sentences.

“Today I went to my first Butler softball game with my dad. One day I will play softball at Butler and be a buldog.”

She spelled Bulldog wrong, forgetting that second L. For Moore, it’s just another reminder of how young she was when she decided where she was going to play in college.

Last November, Moore’s mother found the same journal entry. This season, the freshman shortstop will follow through on a promise she made nine years ago when she plays for Butler softball.

Was going through old things today and found this note that I wrote in 4th grade… crazy how things happen ? pic.twitter.com/f5hMP4Asxb

Moore said she never really looked back on everything that has happened since until her mom showed her the letter.

“When I saw that note, I was [thinking], ‘Oh my gosh, all the games I’ve played, the emails I’ve written to coaches, the camps I’ve been to… it’s all paid off,’” she said.

Moore tweeted a picture of the note along with the caption, “Was going through old things today and found this note that I wrote in 4th grade… crazy how things happen.” That tweet received nearly 700 likes in addition to roughly 40 retweets.

Prior to the team’s first series of games this past fall, Moore put the Butler uniform she’d admired as a young girl on for the first time, sending a selfie to her parents. Then she saw her name on the lineup card at shortstop. She was nervous, shaking even, as she ran out to the field.

“Then one of the seniors came up, and she put her arm around me, and she said, ‘You’re OK. You’ve played this game your whole life, just go do it,’” Moore said. “After the first inning or so, I was calmed down. I knew [the players and coaches] had my back.”

In the crowd, Moore’s parents were watching their daughter’s journal entry come to fruition.

“It was just the culmination of all the years of getting up early, going to travel games, and all the hard work,” her father, Matt Moore, said. “To see her dream come true was pretty cool.”

Roughly five months later, the team is 10 games into the spring season, and Moore is off to a hot start at the plate. In five games, she’s hitting .455, good for second on the team.

“I love her athleticism and her instinctual decisions,” Butler head coach Scott Hall said. “She’s just got a good softball IQ [and] is very fluid in the infield.”

Hall said his shortstop just has to work on adjusting to the college level.

“She’s just got to speed up her clock a little bit, and trust her abilities,” Hall said.

Moore began when she was only about five years old. It was t-ball then, but by the time she was eight, she was playing on a travel softball team. She played on a travel team of some sort for roughly the next 10 years, most of those years with now Butler teammate Claire Gilliland.

Moore’s and Gilliland’s fathers were their coaches for several years. Even when sacrifices had to be made, Moore continued playing.

“Whenever my cousin [was] having a birthday party, or a birthday party my friend would have, I couldn’t go,” Moore said. “But my parents really held me to my commitment. Now, I understand why. Back then I [didn’t].”

Despite the sacrifices she had to make, Matt Moore said his daughter never wavered in her love for softball and dedication to improving.

By the time she was an underclassman at Noblesville High School, the slick-fielding infielder began the college recruiting process, with Butler at the top of her list.

“My freshman year, every travel tournament I’d go to, I sent about 10 to 15 emails to different schools,” Moore said. “Butler was always my No. 1. I always sent an email to Coach [Scott] Hall.”

Attending multiple Butler camps and working with Hall only reinforced this was the program she wanted to be a part of.

“Between my sophomore year and now I’ve changed my swing completely,” Moore said. “It was a stressful time, but he never made it stressful for me.”

At a camp run by her high school coach, Moore also received one-on-one instruction from Hall, who asked her to come down to Butler’s campus for an unofficial visit.

“I just wanted to be a Bulldog,” she said. “The uniform I saw and everything, and Coach Hall was a big reason too. I was thinking, ‘OK, I want to play for him.’”

A few months later, she would get the chance to guarantee that she would play for Butler. After a strong sophomore year of high school play Moore received the phone call she had been hoping for.

Hall called her house phone and made an official offer. Moore knew exactly what her answer would be.

But her mind was made up, and roughly two weeks later Moore made the call back to Hall to accept the offer.

Moore kept close tabs on her future team, which won the Big East championship her junior year and reached the conference tournament her senior year. During study hall periods when the Butler softball team was playing, she’d frequently have the game stream pulled up on an iPad while working on homework.

She was ready to be a Bulldog. And now she is.