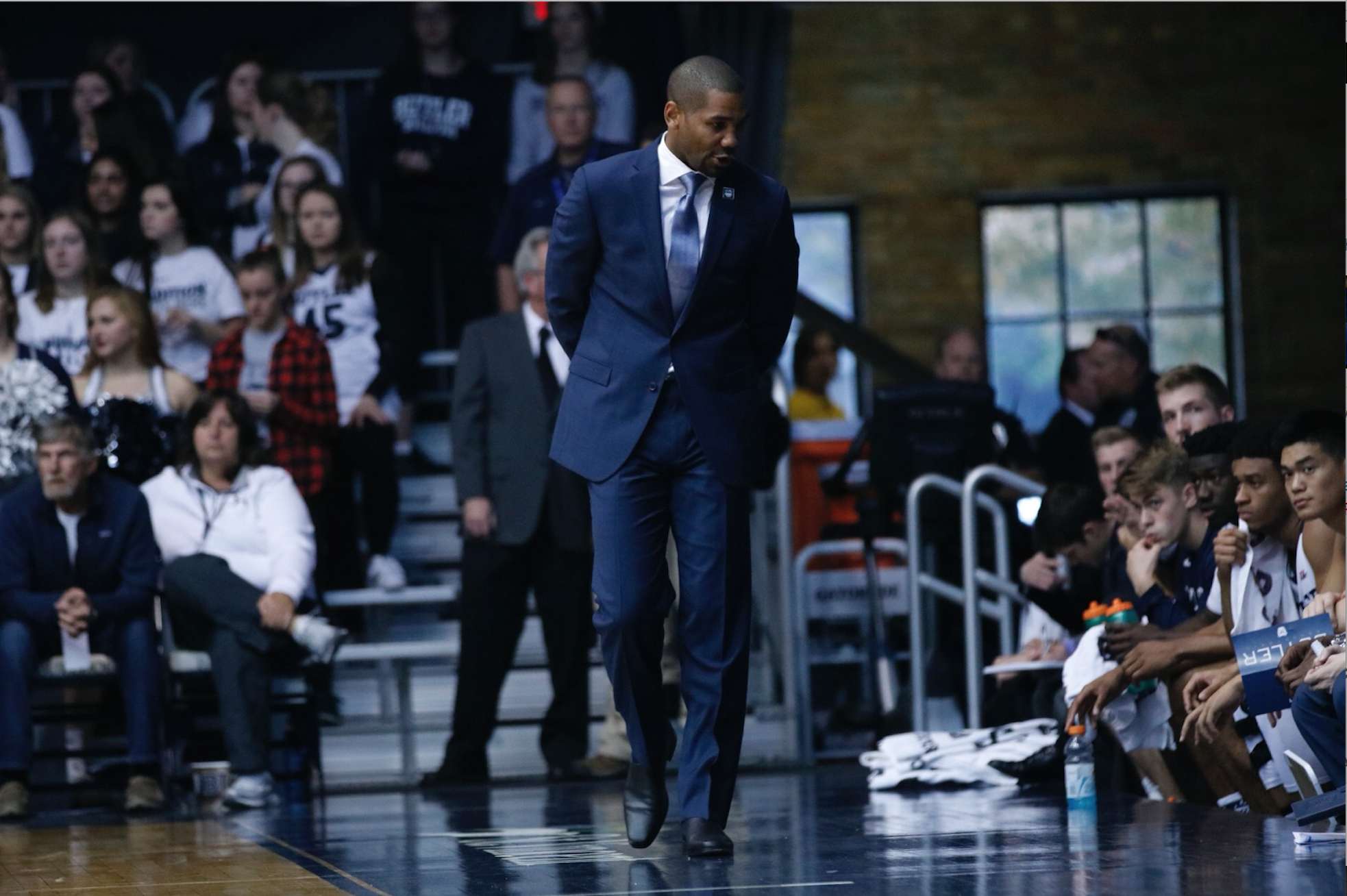 Head coach LaVall Jordan paces the sidelines of Hinkle Fieldhouse during a game. Jordan was previously the head coach at Milwaukee before returning to his alma mater as the program’s 24th head coach. Collegian file photo.

Jordan got his first commitment in September from John Michael Mulloy. But Mulloy is in the class of 2019, and Jordan was still without a single commitment for next season until Markeese Hastings, who committed to Butler in November.

Enter small forward Jordan Tucker. Once the Duke transfer picked Butler over Georgetown, the news shifted the outlook for Butler’s program over the next three seasons. Next year’s big worry was replacing senior Kelan Martin and his scoring ability.

Fret no more. Tucker, a former top 100 recruit, is a natural scorer and a potential successor to Martin. The New York native has only scored six points in 14 minutes of playing time for the Blue Devils. And yet, with a No. 40 national ranking per ESPN on his resume, Tucker represents potential.

Tucker’s potential makes his commitment more important than it was for Butler to knock off No. 1 Villanova for a third straight time. Beating Xavier when they come to Hinkle Fieldhouse in February pales in comparison what Tucker could do in his time as a Bulldog.

Jordan Tucker choosing Butler is the final box Jordan needed to check off as Butler’s coach up to this point in the season.

From the day he got the job in June, LaVall Jordan’s tenure as Butler’s coach has been filled with doubt and worry. There were plenty of concerns. Jordan only had one 11-24 year as a head coach under his belt.

Chris Holtmann’s late departure to Ohio State put Jordan in a unique situation. He was simultaneously meeting and getting to know players while also installing his new system in just over four months.

If that wasn’t enough, Holtmann took his assistant coaches with him to Columbus, so Jordan built his staff from the ground up. Even more new people, voices and philosophies for the team to get used to.

Oh, and by the way, the team had a trip to Spain planned for first week of August. They went 4-0. Not too shabby.

Ability to adapt in a chaotic situation. Check.

It wasn’t enough. No disrespect to the Europeans, but unless they’ve got a version of Jalen Brunson hiding in the Mediterranean, Spain isn’t exactly the Big East.

The coaches of the conference didn’t think much of the Bulldogs, and picked them to finish eighth. Jordan wasn’t bothered one bit and wasted little time making that clear.

Of course, it’s one thing to talk the talk. So far, Jordan’s Bulldogs walked the walk too. Despite playing the 11th most difficult schedule in the country according to CBS, Butler is 13-7 and very much still alive for an NCAA tournament berth.

There’s the signature win over No. 1 Villanova, a tactical masterpiece Jordan executed to near perfection. Jordan prepared his team brilliantly and showed just how good of a basketball mind he can be.

Be competitive against elite teams. Check.

The Bulldogs failed to close out games against Seton Hall and Providence, both of which they led at halftime. Had they done so, Butler would be 5-2 in the Big East and in great position to finish in the top four of a conference that won 81 percent of its nonconference games, second to only the Big 12.

Show you have the basketball intelligence to be a head coach at this level and go toe-to-toe with the best minds in the sport. Check.

Perhaps most importantly, Jordan’s players are buying into what he is trying to do. They could have given up with 3:46 left against Holtmann’s Buckeyes and down by 15 points. Or when they trailed Georgetown by 20 late in the first half.

The fact Butler won both of those games is a testament to Jordan. He didn’t panic and his players followed suit.

Forming a connection with current players and getting them to trust and follow you as their new coach. Check.

Maybe even more importantly, building future connections and relationships while still being fully invested in the present. Check, thanks to Tucker.

Everything hasn’t been perfect for Butler this season. Jordan has plenty of room to grow. The Purdue game wasn’t competitive until it was too late.

The offense is stagnant at times. Butler ranks 159th in the nation in assists per game and 211th in 3-point field goal percentage. Defensively, they’re 318th in guarding the 3-point line and have conceded at least 83 points in each of its first six Big East games.

LaVall Jordan has 20 games under his belt as Butler’s 24th head coach. He doesn’t have a single NCAA tournament appearance to his name, much less Final Four appearances and Big East championships.

But that’s why there’s more than one checkbox. Like Tucker, Jordan has potential. It’s the perfect fit. You can bet money that Jordan is going to keep pushing until he checks off the box that really matters in March.