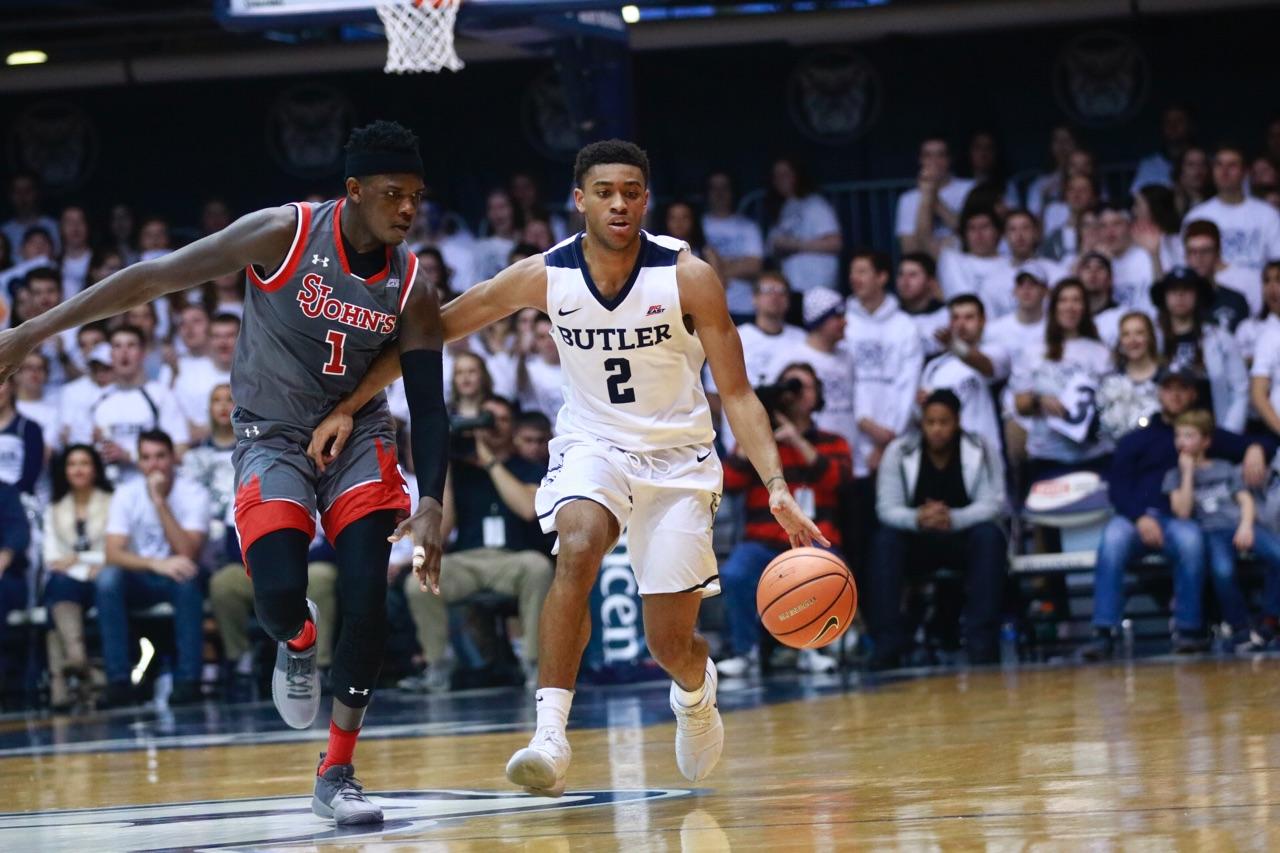 Aaron Thompson dribbles the ball up the court. Thompson and the Bulldogs improved to 5-4 in the Big East with the win over St. John’s. Photo courtesy of Jimmy Lafakis.

The Butler men’s basketball team got a second straight win in dominant fashion against St. John’s. The score was 19-2 in the blink of an eye and the Bulldogs never looked back, cruising to a 25-point victory. Here are three takeaways from a fantastic performance.

1. Butler did pretty much everything well in this game.

It’s pretty hard to play a better game against a Big East opponent than Butler did in this one. The Bulldogs’ 40 percent shooting from the floor doesn’t do justice to how good the offense looked. Butler made their first three shots from deep and shot 40 percent from three on the game. Even Aaron Thompson got in on the act, hitting the first 3-pointer of his Butler career. Of Butler’s 22 made field goals, 14 were assisted on. It wasn’t an offensive explosion, but there was good ball movement and very few bad shots.

Holding an opponent to 15 points on 19 percent (yes, that’s correct) shooting in the first half also means you’re doing something right defensively. Butler held Shamorie Ponds, who averages 20 points per game, scoreless for the first 18 minutes of the game and 0-12 shooting. The Bulldogs forced 11 turnovers and won the 3-point line by 21 points, which makes them very hard to beat. All in all, Butler played an almost flawless game.

2. Of course, it wasn’t a perfect performance.

St. John’s is still winless in the Big East, so this was a game that Butler absolutely should have won and the gaudy numbers need to be taken with a grain of salt. A 25-point victory doesn’t mean that there aren’t still areas for improvement. Butler turned the ball over on its first two possessions and committed 18 fouls, not a great number. The Bulldogs only had four assists after halftime and the offense was more stagnant.

That’s about it in terms of criticism though. This was by far Butler’s most complete performance of the season. The Bulldogs were absolutely in control of this game for all 40 minutes. Putting together a second consecutive convincing performance this late in the season is a great sign. Now, Butler needs to take this confidence and momentum with them when they travel to face a dangerous Marquette team on Jan. 31.

3. Halfway through conference play, Butler is in great position.

With a 5-4 record, the Bulldogs should absolutely consider the first nine Big East games a success. Plus, don’t forget that Butler let two very winnable games slip away and could easily be 7-2. A 9-9 mark in the Big East should be enough to get Butler into the NCAA tournament. If the Bulldogs simply win every home game left on their schedule, they’d finish at no worse than 10-8, no small accomplishment in a league as good as the Big East.

For all of the ups and downs so far this season, Butler enters the final nine games of the regular season with a great chance of finishing in the top half of the Big East with a winning record in conference play. The Bulldogs already have a marquee win over Villanova and two Big East road victories. On top of that, Butler is arguably playing its best basketball of the season right now and have won three out of their last four games. There’s still work to do, but the Bulldogs are in excellent shape.