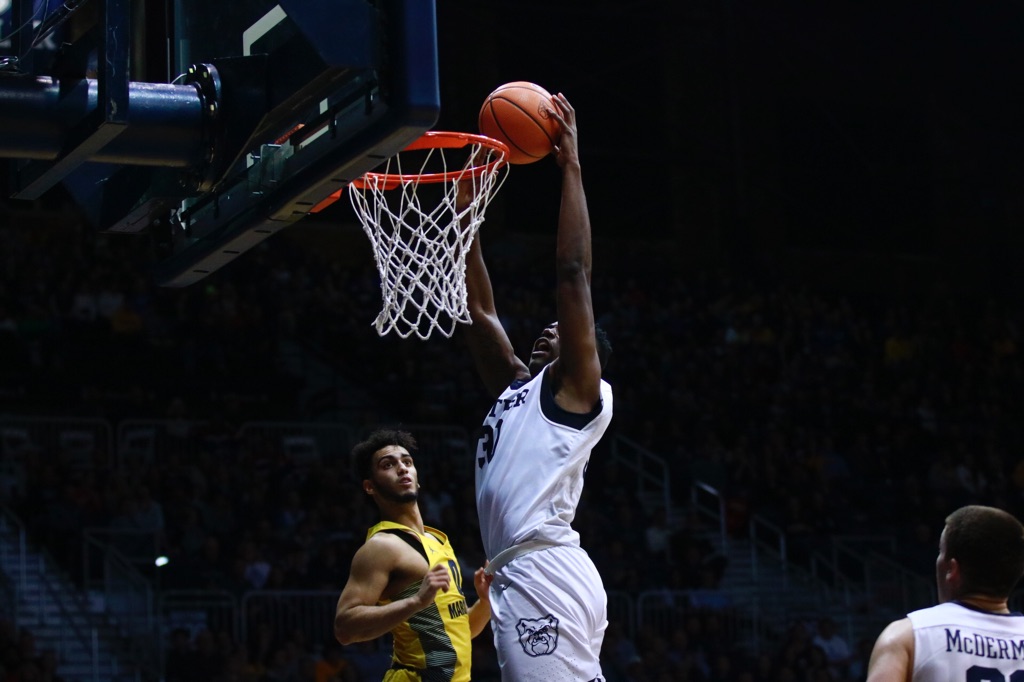 Kelan Martin leaps for a dunk as Marquette’s Markus Howard can only watch. Martin scored a career-high 37 points in the 94-83 win over Marquette on Jan. 12. Photo by Jimmy Lafakis.

The Butler men’s basketball team ended a three-game losing streak on Jan. 12. The Bulldogs rode a 34-16 run in the final 10 minutes of play to capture a 94-83 victory over Marquette.

With the win, the Bulldogs are 13-7 and an even 3-3 in the Big East. The victory is the first since the win on Dec. 30 over No. 1 Villanova and their first game against a non-ranked opponent since Georgetown on Dec. 27.

Butler took a 44-38 lead into halftime, led by senior Kelan Martin and sophomore Kamar Baldwin with 13 points each, respectively. After going back-and-forth with Marquette in the second half, sophomore Sam Hauser hit back-to-back threes, while freshman Greg Elliot hit another to give the Golden Eagles a 67-60 lead with 10:06 left.

The Bulldogs would answer in a hurry, going on a 13-0 run and taking a six-point lead with 7:39 left. Butler would not look back and pull away to an 11-point victory.

“They made a run in the second half and these guys just fought back,” head coach LaVall Jordan said. “They stepped up. Big shots. Big moment. Big stops at the right time. And they were so connected.”

The Bulldogs were led by Martin, who scored a career-high 37 points. The senior finished 12-19 from the field with four three-pointers and was a perfect 9-9 from the free throw line. The performance comes after Martin scored just 10 points at No. 25 Creighton.

“Just put that game behind me,” Martin said. “There’s plenty more games left in this league and there’s a lot of good teams. But can’t dwell on a game that we lost. We had a good opportunity to beat a good team tonight and we took advantage of that.”

Kelan Martin finished with 37 points tonight, the most in a game by a Butler player since Jan. 15, 1998 (Matthew Graves had 42 against Cleveland State)

Baldwin added 19 points for the Bulldogs, while senior Tyler Wideman contributed 16 points to the offense. While Hauser scored a career-high 30 points, the Bulldogs  held Marquette sophomore Markus Howard to just 13 points, who came into the game leading the Big East in scoring, averaging 22.8 points per game.

“It was just keeping [Howard] off the three-point line,” Baldwin said. “Make him take contested twos. It was a team effort, we all did great. [Jorgensen] was on him some. [Thompson] was on him. We had some other guys helping us contain him, so it was all a group effort.